The sacai x Nike LDWaffle with Fragment, CLOT and Undercover 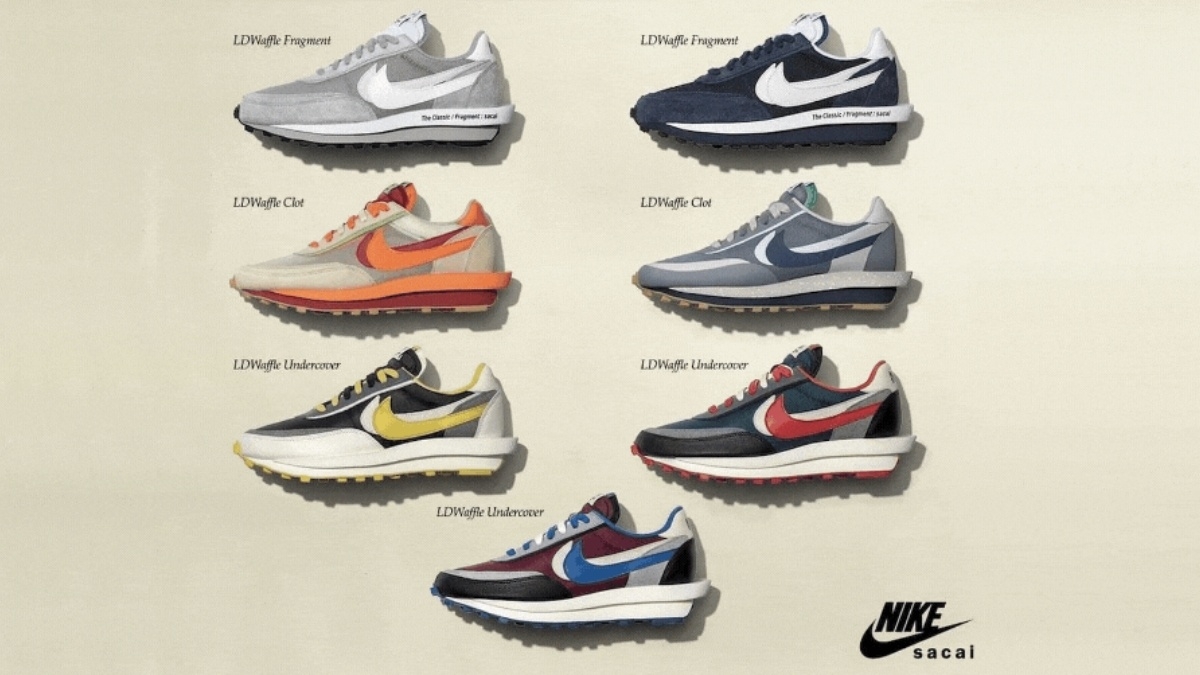 The rumours of a Sacai x Nike LDWaffle collaboration with Fragment, CLOT and Undercover have been going around for a long time. Now it is finally here. The collaborations have been confirmed.

The Sacai x Nike LDWaffle x Fragment is the first collaboration to be released. This model comes in dark blue and grey with suede overlays and a mesh base. The Swooshes on the side are made of leather and are in white, just like the heeltab on both colorways.

The protruding midsole is white with the description of the product written on it. This is recognisable to Fragment. The brand had also written the description on the midsole of the Air Jordan 1s in collaboration with Travis Scott.

The midsole is the same colour as the upper. The outsole is in black.

The Sacai x Nike LDWaffle with Fragment will be released on Tuesday 24 August at 09:00 for €170. Keep an eye on the release calendar for the raffles and retailers.

CLOT may also help Sacai and Nike design a new LDWaffle. These colorways are inspired by the colour schemes that CLOT themselves have used on their Air Max 1s.

The first sneaker Nike and CLOT released together was the Air Max 1 'Kiss of Death'. On this Air Max were light beige colours with orange and red. The base of the upper was transparent. If you look closely at the left pair below, you can see that the upper is made of very thin mesh. This also makes this model transparent.

The right colorway is inspired by the colour scheme of the 2013 CLOT x Nike Air Max 1 'Kiss of Death'. This pair had a grey upper with blue accents and was less transparent. This pair came with green laces and green branding. On the new model, you can see a green tongue.

The Sacai x Nike LDWaffle x CLOT is expected to be released on Thursday, September 16 at 9AM for €160. As with the other colorways, keep an eye on the release calendar regularly for any changes.

The third and final announced Sacai x Nike LDWaffle collaboration is with Undercover. This is also the only collaboration with three different colorways instead of two.

Undercover, like the other two brands above, is no stranger to Nike. Together, they have worked on many different models, including the Daybreak, React Element 87 and Overbreak.

The three colorways are all very different from each other. The top left colour scheme is black with yellow and grey. This colour scheme is similar to the Undercover x Nike Daybreak 'Yellow'. The upper right pair has a dark green upper with red accents. This colorway, like the bottom one, is new to Undercover and Nike.

The last pair has a bordeaux red base on the upper. The Swoosh, outsole, lining and laces are blue. There are black and grey accents on this model.

The Sacai x Nike LDWaffle x Undercover does not have a release date yet. Keep checking our Sneakerjagers app and the Nike SNKRS app for more information on this release.