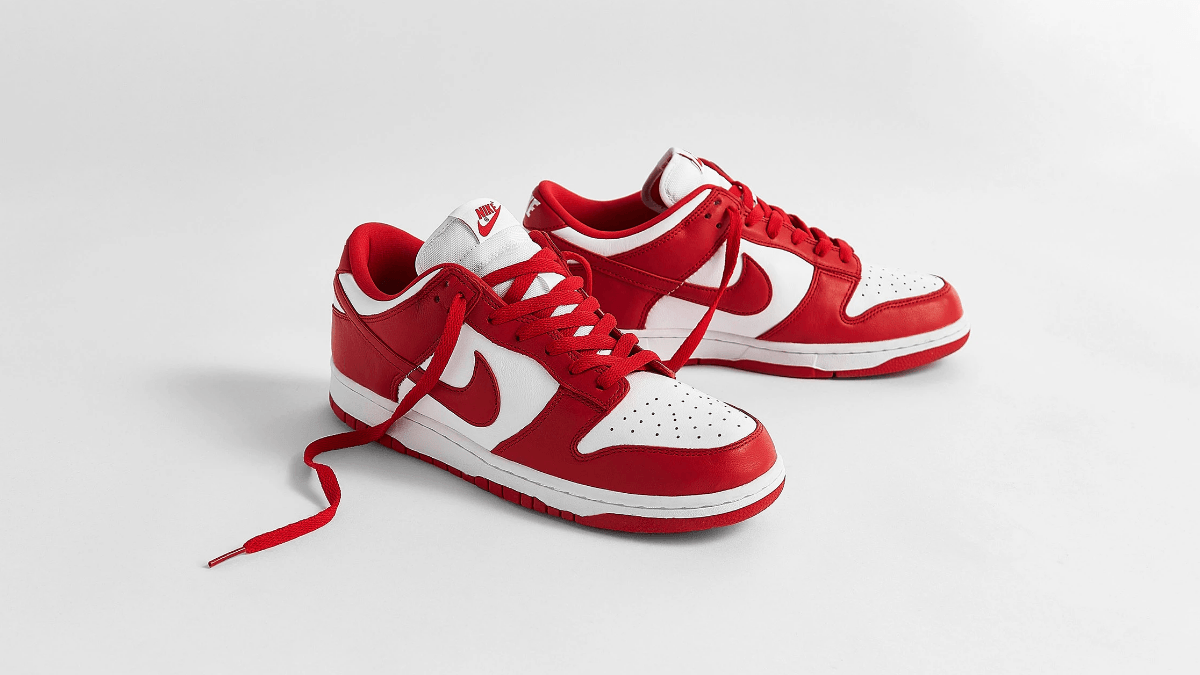 After we all celebrated the release of the extremely popular Air Jordan 1 WMNS 'Tie-Dye' today and more than half of us had to start the day with an "L" after updating our mailbox 100 times, Nike already has the next heat-sneaker release in the bag. The popular brand with the Swoosh finally provides us with the second member of the 'Team Tones-Pack'!

Before we give you cool insights into the details of this gem and inspire you with a small overview of the pack, here's the release info!

The hyped silhouette with the classic colorway will drop tomorrow, June 12, 2020 at 09:00 am at selected retailers and of course in the Nike SNEAKRS app. For €100 you can have the Nike Dunk Low SP 'University Red' delivered to your home.

⚠️ ATTENTION: The shoe is released at almost all retailers by drawing lots for the right to buy. Instore raffles at your sneaker shop of trust will unfortunately still not be available, so we all have to test our luck via online raffle.

By clicking on the button below, you will be forwarded directly to our retailer list. There you will also find a list with all the links to all the online raffles of the different stores! Give it a try! ??

Justified question, which can theoretically be answered with a "both…and…". Because the sneaker with the red-white upper and the shiny white midsole was already released by Nike in 2005. At that time the shoe was marketed as 'St. John's', but had exactly the same coloring. It's very similar. The only difference between the two drops is the name. But even here there is actually a connection. ?

At that time, the skate silhouette was named after the "St. John's College Of Liberal Arts And Sciences" in New York, Queens and had the colors of the college logo on the upper. You can probably guess it now: The new Nike Dunk Low SP 'University Red' got the colors of the college logo again. This red is not a new one either, it even adorned the very first Air Max in 1987! This Air Max 1 OG was also called 'University Red' back then.

What? You don't know the first Dunk of this bunch? No problem! I wrote a blog for you last month about this beauty in 'Pine Green'. Check it out >> Nike Dunk Low SP 'Brazil' <<.

Back to the pack: The 'Team Tones Pack' contains a total of 3 sneakers that were distributed over the months of May to July and all three have been given a retro colorway. The last of the pack will be the Nike Dunk Low SP 'Champ Colors', which is expected to drop on June 24. Check out the picture below. There you can see all three Dunk's of this pack.

That's it, folks. I hope I could give you some cool insights about this sneaker highlight from Nike. If you want more current sneaker news, then check out our NEWSBLOG. Every day we will provide you with new and exciting news from the sneaker world! Take a look at our Release Calendar to get a picture of all the upcoming releases of your favourite brands like adidas, Nike, Air Jordan or Reebok. Have fun! ?