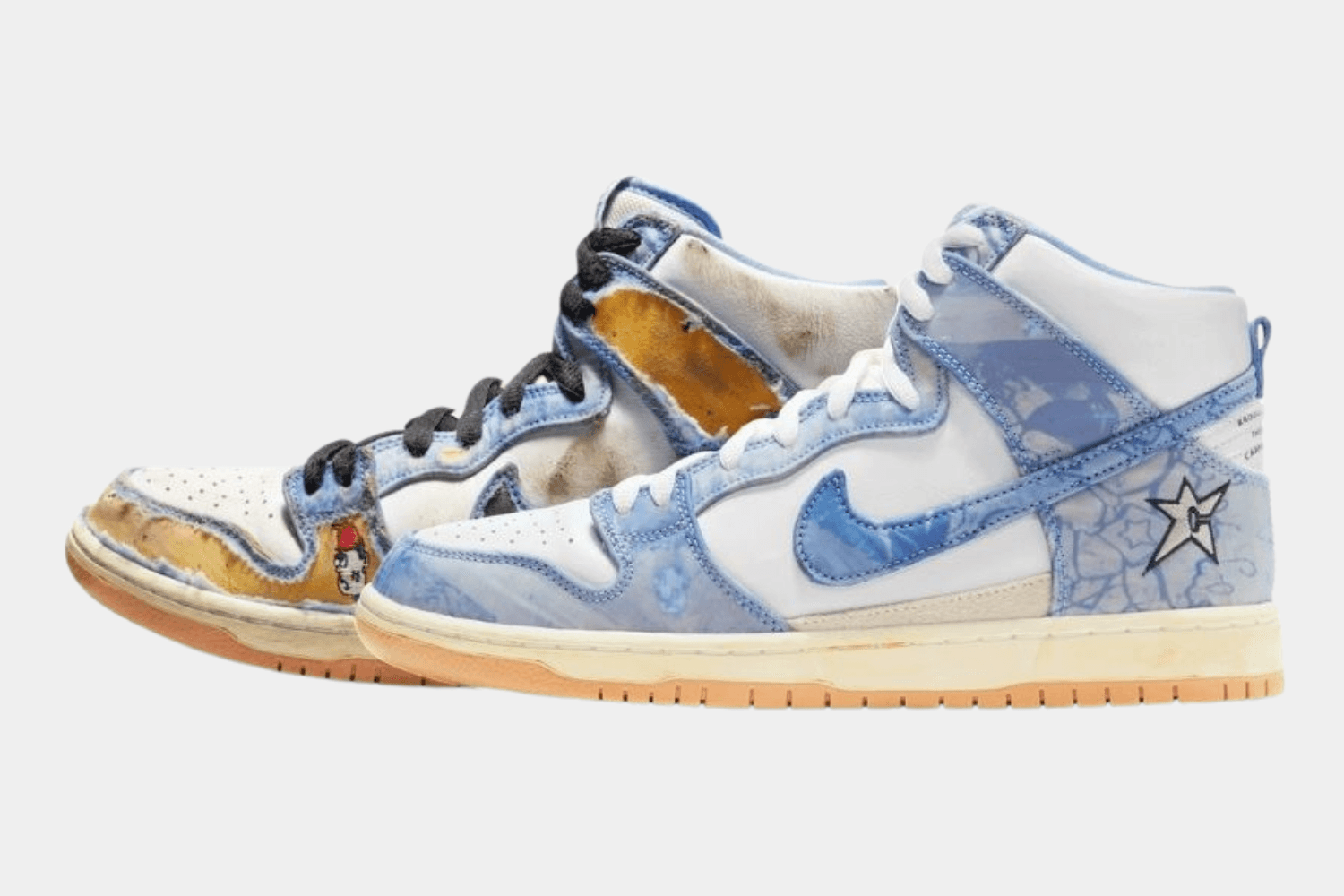 In 2002, Nike introduced us to Nike Skateboarding, also known as Nike SB. They brought us the Nike SB Dunk Low with a padded tongue and collar and 'Zoom Air' soles. At first, the model was quite underrated, but now the sneaker seems to be making a comeback. We have listed ten pairs of the best Nike SB Dunk sneakers here that are currently available for resell prices at StockX. Read on, and maybe treat yourself to your favourite pair!

Where to start when talking about the Carpet Company x Nike SB Dunk High? In every design by Carpet Company you see the love for design of the brothers Ayman and Osama Abdeldayem. So also in this collaboration with Nike Skateboarding. The sneaker has many special features. You do not have to worry when your shoe wears out. Under the beautiful top layer, there is a yellow layer that looks stylish and vintage. In addition, the texts on the heels are bent under another thin layer. One of the heels says 'Brought To You By The Habibis At Carpet Company'. Super comical and unique.

The sneaker dropped in March 2021 and all you need to know about it is a quote from one of the designers:

"The Carpet Dunk is probably one of the most complex Dunks to come out in a long time (…) There's a lot going on. There's two layers of graphics, there's screen material, there's a whole bunch of stuff."

The 'Street Hawker' colorway that is featured on this Nike SB Dunk Low in designed by artist Jason Deng Guangzhou. His model features 22 details inspired by street food. All elements are based on six regional dishes from six Chinese cities. Furthermore, the heeltabs feature Chinese calligraphy for 'food'. Other notable features include Yangchun noodles, chopsticks and 10-cent copper coins. In addition, the four laces are inspired by four flavourings in Chinese cuisine: green (shallot), yellow (ginger), white (garlic) and black (pepper).

The left and right shoe have both been given their own style. The right shoe is the most colourful of the pair. From rainbow colours processed in a paint-like manner to a copper-coloured toebox. The contrast is great with the left shoe, as it has a more neutral base.

The iconic Atmos Elephant look has been reused on this Nike SB Dunk Low. While this release is not in collaboration with Japanese retailer Atmos, the sneaker does mimic the colours of the 2007 Air Max 1 'Elephant'. The Elephant Dunk returned in 2020 with a textured upper reminiscent of elephant leather. The upper is covered in a mix of black and white leather and suede, Cement Grey Elephant print overlays and a Clear Jade Swoosh. The silhouette features a padded SB tongue and Elephant print heel tab with Nike embroidery.

This Nike SB Dunk Low Club 58 Gulf skate sneaker is designed in collaboration with four skate shops in Western Europe. The silhouette has its colorway inspired by the Porsche 917 Gulf race car from the 1970s. The sneaker consists of the colours blue chill, safety orange and black. Other details of the car have also been adopted. On the side of the heel, for example, a circular patch can be seen containing the number '58'. This number is echoed on the woven tag, which is located on the padded mesh tongue. Finally, the kicks are comfortable enough to run all day with.

Ben & Jerry's have chosen to give the Dunk a colorway of their favourite ice cream flavour, Chunky Monkey. The sneaker has a blue/green colour base with cowhide overlays. In addition, the yellow Swooshes on the side resemble melting ice cream. This is a nod to the bananas used in the ice cream. Furthermore, the kicks have a tie-dye interior and Ben & Jerry's style Nike branding on the heel lip.

Let's get all lovey dovey with the Nike SB StrangeLove. The base of the sneaker consists of soft suede and a velvet fabric in a fresh light pink colour. On top of this, various red details are applied, like the Swoosh, laces, sockliner and the heeltab. In addition, they have placed a pink outsole on the sneaker and a white midsole. On the shoe you can find both the Nike SB logo and StrangeLove branding. Valentine or not, this sneaker is a must have!

Japan-based designer Verdy delivered another delicious collab with Nike in 2021. On his debut collaboration with the Swoosh, he incorporated his 'Girls Don't Cry' print. With this second release, his second brand, Wasted Youth, is in the spotlight. The punk and skate culture is brought together in an amazing way on the sneaker.

The upper is composed of patchwork black denim and accents of black tumbled leather. In addition, the side of each shoe features the Wasted Youth logo stitched next to the Nike Swoosh. The sneaker also has a DIY option on the Swoosh. You can cut the black stitching to reveal the white outlined Swoosh underneath. Finally, the heel features "Wasted" and "Youth" embroidery and a D-ring that highlights the punk inspiration of the design. Cop or Drop?

This Nike SB Dunk Low is an ode to the Grateful Dead Bears. These were dancing bears signed by Bob Thomas. It was part of the album 'History of the Grateful Dead, Volume One', which was released in 1973. The sneaker is yellow, with a unique blue swoosh with teeth. In addition, there is a fur on some parts of the upper, representing the bear effect.

Supreme and Nike SB released this sick SB Dunk Low in March 2021. The sneaker is inspired by one of the most famous SB Dunk Highs of all time - the Nike SB Dunk High Supreme from 2003. The new Supreme Dunk features gold stars on the mid panel and imitation crocodile skin overlays. The gold metallic Supreme deubré finishes the design. Do you want to have gold in your hands?

Travis Scott has already had several collaborations with Nike. They released several Air Force 1s together, but also several Air Jordan models. Each collaboration was sold out in no time and so is this Nike SB Dunk Low from 2020.

The upper features a bandana print. This print is incorporated on overlays that are located on a regular beige and beige checkered base. The tongue features Travis Scott's signature 'Cactus Jack' logo. What also stands out about the sneaker are the laces. They seem to be made of rope.