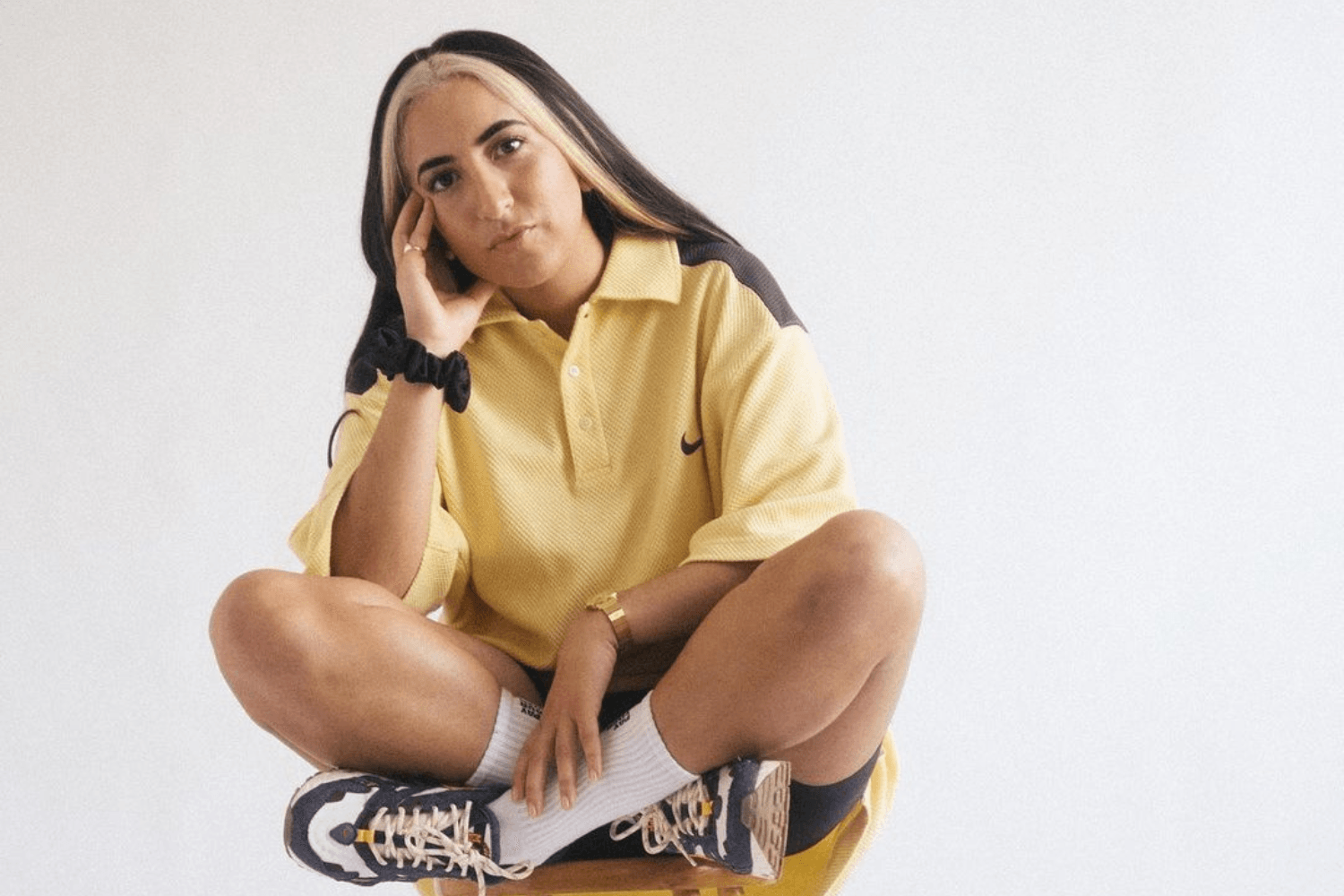 Get to know Ayshe Zaifoglu, also known as AZ or azcaptures. AZ is an all-round creative, host and photographer with a big passion for sneakers. Working with a number of sneaker brands behind the camera in the past, she is now SNKRS host for Nike and has big plans for the future.

Get to know Ayshe

For those who don’t know AZ yet, Ayshe is an all-round creative and describes herself as creative in front and behind the camera. “I’m trained in TV and film production, so my background has been behind the camera but through working in the music industry and London streetwear scene, I somehow managed to get in front of the camera and it landed me a role with SNKRS.”

In 2020 AZ was one of the 20 Londoners, alongside fellow sneakerhead Titi Finlay, selected for Nike By You to design and sell their own sneakers, and since then has kept the connection strong with Nike. But alongside this, Ayshe has different freelance jobs and has set up her own platform ‘Pay Your Shooter’.

She goes by the name azcaptures, which has a kind of cute story to it. “AZ is obviously my initials”, Ayshe tells. “And when I started as a photographer, it was like az-captures everything with a camera. This became a signature thing, I even got ‘captures’ tattooed on my leg. Now, as a presenter, it’s more like I capture people's attention or hearts, haha.”

As an all-round creative, none of Ayshe’s workdays are the same. “There are days when I’m working in production for a shoot or something, where I’ll be the first one on the set sorting everything out and the last one to leave.” When hosting a show at Nike, this is the other way around. “If I’m doing a sneaker show, they send me a nice car to pick me up, and I don’t have to do anything. I get there, I present, and they send me home in an even nicer car. So it’s like, two very different worlds but I love that.”

Ayshe has been a freelancer for over four years and has worked with brands like PUMA, adidas, Kickers, and Nike. In these four years, she feels like she’s become quite established in freelancing. “I don’t have to say yes to every job that comes in, instead I’m just working with people that I love to work with.” Here, she talks about setting up her own network with people that she likes to work with.

This has brought Ayshe to the place she is now. With her job as a photographer, host, and video editor, she has created her own name and combines her passion for sneakers with her day-to-day jobs. “That’s also an important thing in my daily routine, picking out my outfit and sneakers”, Ayshe laughs. “Depending on the job, like when presenting at Nike, I’ll try pick out sneakers to impress. But other days I’ll just grab some beaters.”

“I have always been a Nike-head, so to get the chance to design your own sneaker was mental.” During this competition, twenty people from London had the opportunity to bring their designs to life. Ayshe was one of them. “During the first lockdown in London, I got an email from Nike saying that I was selected to design my own sneaker. I was like, what the f*ck! The whole world was in a bad place, but then I got that email and it was like a dream come true.”

Along with the sneaker’s design, Ayshe had to make a promo for her own sneaker. With her experience in editing and filming, she went all-in. “I was like I have to make some really good content because this is my day job. I got the drone out and everything,” she says.

Six months after the campaign, she got a call from Nike and got told that they had an opportunity for her. “When I got this call, I was like, yes, whatever it is, I don’t care, I’ll do it.” This has resulted in her being the first, female, European host of Nike SNKRS Live. Since then Az has been seen hosting SNKRS on Air Max Day, in Amsterdam with Patta and was recently in Paris for Quai54.

Ayshe’s passion for sneakers started at a young age. “My mum was a big Nike girl, she loved sneakers and always got me really sick Nikes as a child. So all of the baby pics of me, I’m wearing great sneakers," Ayshe tells while grinning. “It was kind of ingrained in me.” Here, she also talks about growing up in London, where there is a big culture around sneakers, and Air Max’s in particular. “It was like a look out for the best Air Max in school.”

Her passion for sneakers really started to take-off when she started working at Patta in 2014. “That’s when I started taking sneakers more seriously, and really started caring about the colorways I wanted. I developed a super particular style, I don’t just like everything.” During this time, Ayshe wasn’t collecting sneakers, because of her small shoe size. “It was very much an 'I love you, but I can never have you' kind of thing”, she tells. “I’m a UK 3.5, which is an EU 36, and a lot of sneakers that I loved were not available in my size, which was quite frustrating.” This love-hate relationship with sneakers made Ayshe not like sneakers for quite some time.

That is also why Ayshe started her initiative Pay Your Shooter, where she speaks up for women in the creative scene. As a photographer, she experienced different moments where big brands used her work and did not pay her fairly. “Pay Your Shooter was born of the frustration of people asking me to work for free,” she tells. “They didn’t see it as work, they just saw it as taking pictures.” This is something lots of creatives who work as freelancers have to deal with.

With Pay Your Shooter, Ayshe wants to speak up for young creators and start a conversation amongst big brands. “I just want to be able to give young creatives a uniform to represent themselves,” she says. “I want to keep the conversation very much transparent.” Here she mentions the fact that just like in the sneaker industry, there is also a division in the creative industry. “There’s generally a divide on how much men and women get paid, especially as photographers. This needs to change.”

And so does the sneaker game. Friend and colleague Titi Finlay, who is also working with Nike, is big on sizing equality in the sneaker game. “We talked about if we’re able to change the sizing globally, which is like a sneakerhead’s ultimate dream, to be able to get any sneaker in your size anywhere you go.” A dream of Az’s.

Even though Az is happy with where she is now, and wants to continue working this way, she also has big plans for the future. “I just want to keep pushing what I’m doing, and be seen. Not in a self indulgent way but in a way that paves way for younger women.” she tells. Here, she mentions Instagram, which she’s mostly active on. With her platform, she wants to inspire people as well as get inspired by others.

Here, she mentions her job at Nike SNKRS Live. “Just seeing me as a host on SNKRS as a young woman who just loves sneakers, seeing someone who looks like you, or has the same interest as you, on a big platform is eye-opening in itself,” Ayshe tells, “I just want to keep doing that for the younger girls, because we’ve got some big things to do. I have plans, definitely.”

When being asked about which sneaker release she’s most excited about, Ayshe right away mentions the Ambush x Nike collab. “I’m really excited about the Ambush collab that’s coming, the Ambush x Air Adjust Force. It’s crazy!” Ayshe is a big fan of the OG silhouettes, like the Air Adjust Force, and the fact that Ambush is a brand founded by women means that this collab is definitely one she’s excited about. “I just love really retro-looking sneakers, anything that looks super 90s.”

Ayshe can also be seen during SNKRS Day on August 8, 2022. Here, she will be co-hosting the SNKRS live show with fellow colleague Will. Check Ayshe's Instagram @azcaptures for more updates and don't forget to tune in during SNRKS Day.

Read this interview in Dutch >>

Read this interview in German >>