Gender neutrality is the next step in sneakers - Interview Titi Finlay 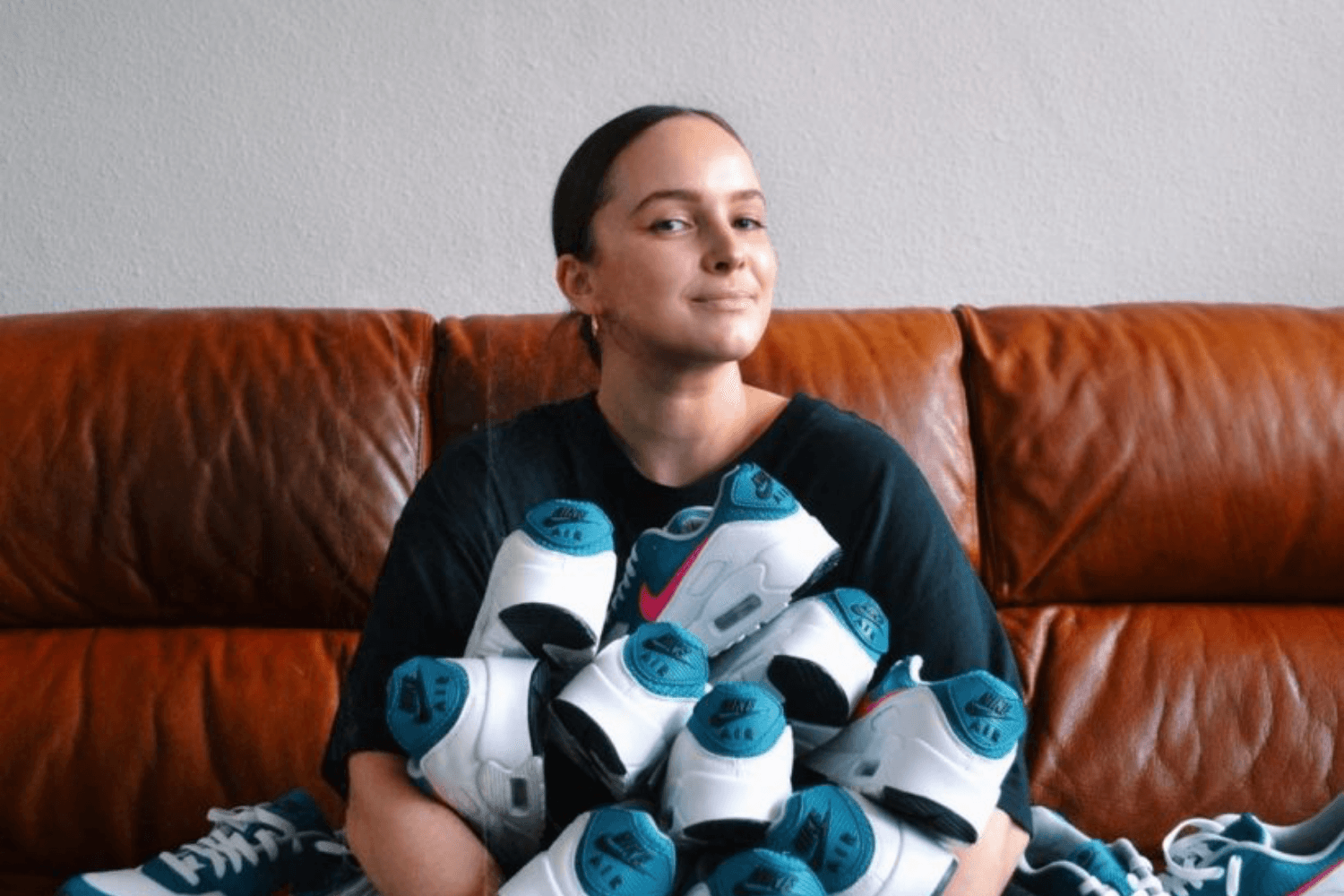 Make sneakers gender-neutral - That’s the message Titi Finlay wants to bring across big sneaker brands like Nike and adidas. Titi is a well-known sneakerhead and has an ongoing partnership with Nike. With her work and graphics, she wants to bring gender-neutral sizing to the sneaker industry.

Get to know Titi

For those who don’t know Titi Finlay yet, Titi is a general creative, living in London. She has a big passion for sneakers and a lot of unique pairs in her collection. Her passion for sneakers started at an early age. When she was a kid, she was a big fan of the Vans Slip-On. “I was the artsy type of kid and very into Vans skate shoes.”

Later on, she started wearing heels and other footwear. Sneakers became a big part of her life when she moved to London. “It wasn’t until I moved to London in my early 20s and saw streetwear culture taking off, with people wearing sneakers for fashion, that I realised it was something I could also do”.

This started with a pair of Nike Air Max 95s. “I felt so cool in them. It all started with that pair”, Titi tells. When we asked why sneakers are such an interesting thing for her, Titi thinks for two seconds. “I never really knew why it was there but it was always something I liked. Sneakers are like an emotional thing for me, I don’t buy them for the hype. Some shoes will just have this instant effect on me, and I just have to have them!”

Since Titi moved to London, her passion for sneakers took off. She started working at ASOS and Laced, where she was able to translate her knowledge of sneakers into her day to day work. “It all kind of fell into place for me”, she says. “When I worked at ASOS as a presenter on their sneaker show, I was building relationships with big sneaker brands like Nike and adidas behind the scenes. This was really helpful and I was becoming more public about who I was in sneaker culture.”

After her job at ASOS, she started working at Laced where the content was solely focused on sneakers. A dream come true for Titi. Around 2020, she reached out to Nike. “My partnership with Nike initially started from the connections I made with them at ASOS”, she says. “I think it was Air Max Day 2020 where I did a partnership with them based around self-care and mental health. I reached out to them and asked if they’d be interested in sponsoring it and they did.”

This has resulted in an ongoing partnership with Nike and in 2020 she designed her own sneaker with them. Right now, in 2022, she’s working as a freelancer and takes on different projects. She has a big following on Instagram and shares her graphics with the message: “Make Sneakers Gender Neutral”. With these designs, she wants to give a voice to women in the sneaker scene.

It was not until Titi designed her own sneaker at Nike in 2020 when things really started to take off. “In 2020, Nike did a By You project in various cities, where they chose 20 creatives from each place to design their colorways on the silhouette”. Within three sentences, Titi needed to tell Nike what she would design if she was chosen. “I told them I was going to design mine for the women in the London sneaker community, and to champion female sneakerheads. They obviously liked the idea, because I was chosen to design a sneaker.”

Titi's design of the Nike Air Max 90 takes its inspiration from different iconic Nike colorways. "It’s inspired by the men’s silhouettes, and it’s a mixture of the Spruce Lime Air Max 90 and the Watermelon Air Max 1, which both only came in men’s sizes. The big white bit is a reference to Sacai’s Air Max 90, as I found it interesting how they did that. But it also represents the space for women in sneakers".

With her design, Titi started the conversation about the position of women in the sneaker scene. Shortly after the sneaker was released, she started to focus more on gender neutrality and posted more graphics on her Instagram, which she designed using her own skills from painting and after her partner, a graphic designer, taught her how to do so. “My work got shared so much it was crazy. Nike wanted to partner with me again to do a product.”

Since then, her graphics have been printed on tote bags, shirts and made into patches. Titi had two collections at Nike and her patches are available at NikeTown in London. Her prints are colourful and have a 90s vibe to them. But the important part: the designs have a clear message. “I was putting out those graphics because I just felt like I needed to say this, and I didn’t realise how many people felt the same way.”

“It came from frustration initially”, Titi says when being asked why she started to raise her voice about gender neutrality within the sneaker scene. “There were so many pairs of sneakers that I wanted that didn’t come in my size- I’m a UK size 4 - as most men’s shoes start at a UK size 6.” Here, she talks mostly about the retros and iconic colorways that she was particularly interested in. “When you miss out because of your size it seems unfair.”

Titi talks about the women's releases and why this is not what women want, however ironic this may sound. “When the Dunk was having its moment, they made the Disrupts for women. A chunky version of a silhouette that was already fine and we didn’t ask for that. They even made a platform version of the Air Jordan 1 Low recently and it’s like, why?”

It’s not like Titi has a problem with women's colorways, but it's the division between men and women that bothers her. “If you’re going to make women's colorways, that’s fine, but at least give us access to the basic products that we really want.” Here she talks about the Nike releases. Even though she’s working with Nike, she still sees a lot of room for improvement. “Look at Yeezy, they do all sizes in everything, and it’s all gender-neutral.”

Recently, Titi tried to buy pair of DC sneakers, which have a bit of a nostalgic feel to her. “I love how chunky they are”, she says, “but when I wanted to try on a pair in my size, they only had the pink glittery ones.” With her (sometimes rebellious) work at Nike, she sees that the conversation around gender neutrality has taken a big step. This is a positive thing, but the changes are not visible yet and women’s releases are still being dropped to this day. “Just blend it more, because I think that’s what everyone’s moving towards”.

Titi is optimistic about the future. She’s looking forward to what the partnership with Nike will bring and enjoys her work as a freelancer. “The big goal is to just have fun, and I’m in a very fortunate position where I can do the things I want to do”, she says. “I’d also like to work with Nike on designing and creating more products.”

Here, Titi mentions that she maybe wants to do another sneaker collab. “I would love to do another footwear collaboration with them one day. I might do an Air Max BW, which I love.”, she says while picking up the Air Max BW ‘Beijing’ out of her closet. “Recently, I got a pair of these from the ‘City’ pack, which were really hard to get, but I managed!”

Even though Titi’s happy to be working with Nike, she won’t exclude collaborations with other brands. Here, she talks about maybe working with adidas or New Balance. She also refers to smaller brands like Lilith and Salomon. “I’d love to work with Lilith, she’s from New York and designs sneakers exclusively for women. Salomon would also be pretty cool, they’re quite up and coming right now.”

Titi is also thrilled to see skate shoes make a come-back. Brands like DC and Etnies are bringing back their chunky silhouettes and she is all for it. “I feel like skate shoes are about to have a resurgence, and it would speak to my roots if I could do something with those as well.”

Whatever Titi’s next work is going to be, we're ready for it. With her designs, she’s speaking for all women in the sneaker scene and has started a conversation within the big brands. Even though the big changes are maybe not visible in the current releases, Titi thinks this will switch in the future. “The big brands are listening”, she says. “There are so many women speaking up about it and men as well, it would be rather stupid not to listen to these voices. I feel it will happen eventually.”

In this discussion about gender neutrality, Titi’s love for sneakers hasn’t changed one bit. “I’m really looking forward to the AMBUSH x Nike Air Adjust Force in black and white”, Titi says when being asked about what sneaker releases she’s excited about. “The Joe Freshgoods ‘Inside Voices’ are just beautiful too, both the pink and blue versions. I’m trying to get those, we’ll see if I’m lucky!”

Titi is also happy to see the return of the Air Pennies at Social Status. “It’s great to see them coming back and hopefully, we’ll see more of that in the future”, says Titi.

We’re excited to see what Titi is going to do next and can’t wait to see more of her. If you’re curious about the graphics and work of Titi, make sure to check out her Instagram.