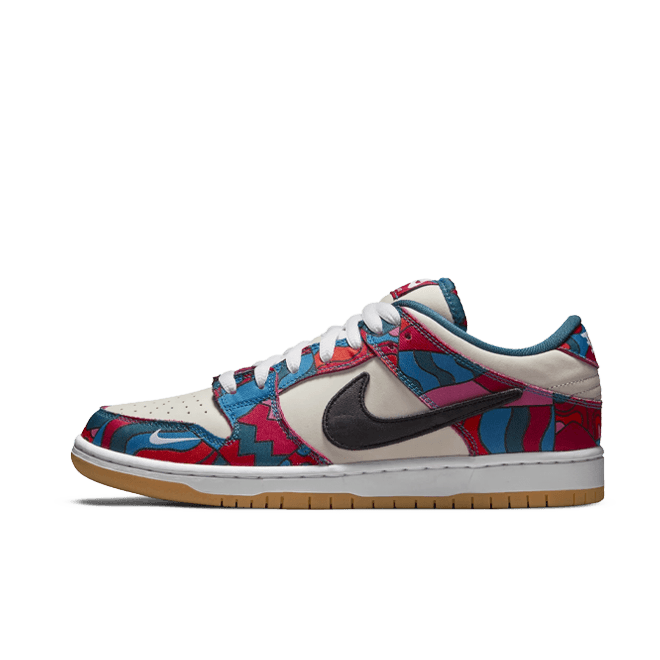 Dutch artist Piet Parra and Nike have a rich history together. It all started in 2005 with the Air Max 1 'Amsterdam'. After that, more Nike x Parra collaborations followed. In 2021 it was the turn of the Nike SB Dunk Low silhouette which had a Parra twist. In 2018, Piet Parra also released a SB Dunk together with Nike.

Piet Parra became inspired by abstract art and used that inspiration in the design of this eponymous Nike SB Dunk Low Parra 'Abstract Art'. Characteristic styles from Piet Parra's art return on the sneaker. We see geometrical patterns in typical Parra colours on a large part of the upper. These patterns were also seen on the outfits of the skate teams who participated in the Summer Olympics in 2021. These were also designed by Piet Parra. The SB Dunk Low was part of this project that celebrated the occasion when the skateboard sport made its debut on the Olympic stage.

Besides the striking upper, the upper has another surprise in store, because it is a tear-away upper, which hides a second upper. This is revealed by wearing the sneaker a lot, skating on it, or by taking a knife or scissors and removing the upper manually. The toebox, mid-panel and heel are made of white leather. The classic Dunk branding gets a slight twist with the embroidered Parra logo on the left heel and on the tongue label, the geometric patterns also return. The sneaker sits on a white midsole and a gum outsole.