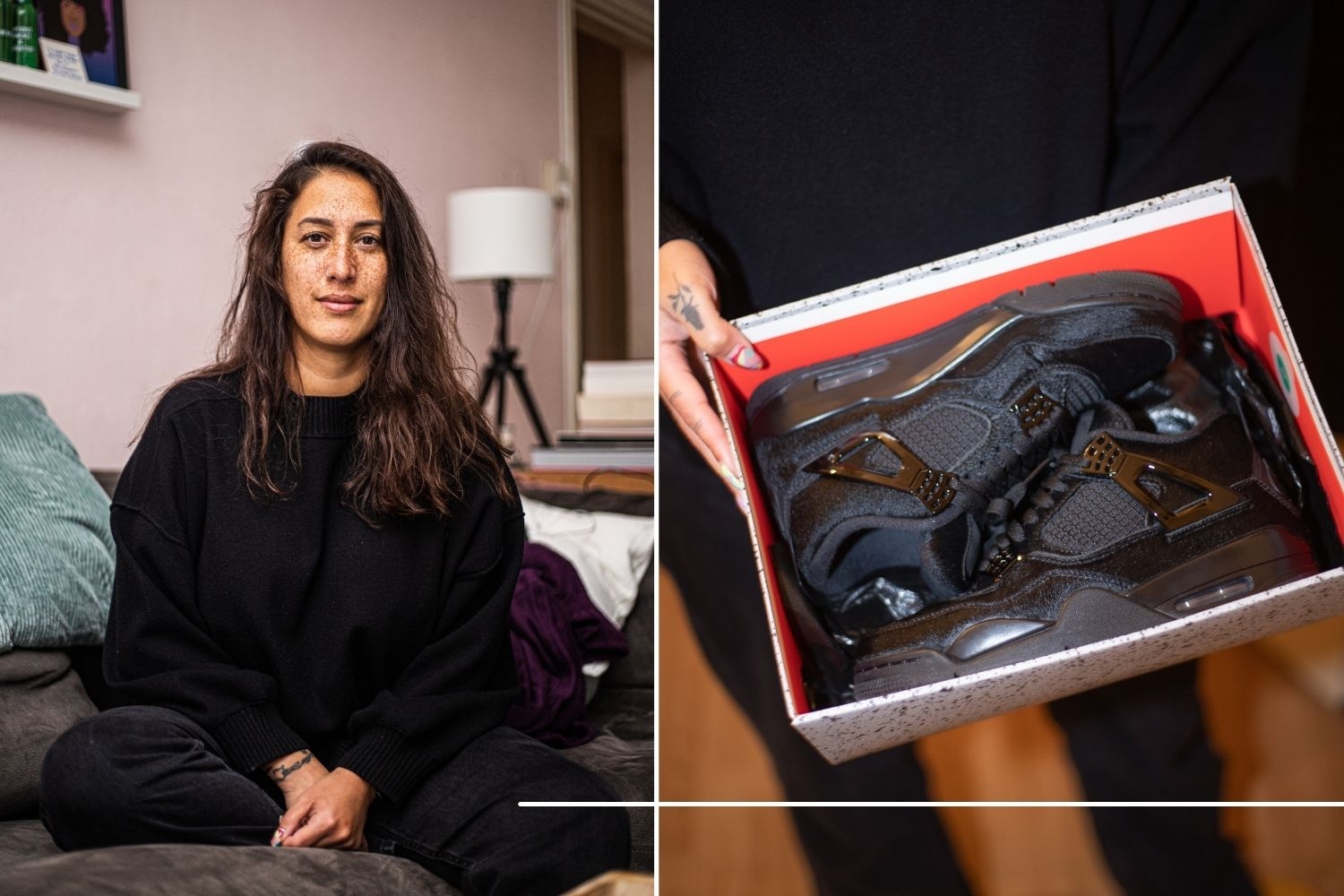 In this series, we talk to several female sneakerheads. We talk about their passion for sneakers and how they see their position in the sneaker world. In this first part we speak with Thamar Kempees. Thamar is a proud Rotterdammer and has a great passion for sneakers.

"I think my passion for sneakers started with the Nike Air Max BW," says Thamar. She has been a big fan of sneakers for a number of years and has a lot of gems in her closet. "I'm pretty brand loyal, Jordans and Nikes are really it for me".

When she was fourteen, she got her first BW pair. "That model is real nostalgia," she says.

"I've also been out of the sneakerscene for a while," says Thamar. "I used to buy sneakers from time to time, but then the focus was more on other shoes like Dr. Martens or heels." For a few years now, she has found her way back into the sneaker world and her shoe wardrobe has expanded considerably. "It's kind of a boomerang effect."

Besides being a sneaker fanatic, Thamar works as a freelance marketer in the cultural sector, she is a board member of Diversity & Inclusion at GroenLinks Rotterdam and since 2019 she has her own book club: 'Boze Bitches Book Club'. Here she reads and discusses feminist books together with a group of 'angry bitches'.

She makes no secret of her feminism and, in addition to sneakers, also shares her political statements and preferences on her social media. "I'm literally in politics on my sneakers."

No suits and pumps for Thamar, but sneakers and jeans. "I may be on the board, but I also just stand demonstrating in my sneakers." Various political topics are also discussed in her book club. "All the books we read are about feminist topics."

"Recently we also started the 'Angry Babies Book Club'. Here we read books in which the main characters of the stories are not only white or have two daddies, for example. Once in a while we organise a reading hour, which is then chaired by a drag queen."

Feminist in the sneaker world

Despite Thamar's passion for sneakers, the sneakerscene does have some drawbacks. One of those disadvantages is that the sneakerscene is still really set up for and by men. "I used to be told that I must like those sneakers because of the 'fun colours'. And if that was the case, does that make my passion less legitimate?"

In addition, with her shoe size 37.5, Thamar often falls by the wayside. "There are still too many releases that start from size 38.5. I find that a real pity. On the other hand, there are also some fat drops that don't appeal to people with a larger size. But I do think - just like everyone else - that I take an L too often. I'm a bad loser."

It reveals her frustration with the current hype game. "The game is nice, but the players are not. Just look at the releases at Patta: a whole civil war in Amsterdam and two minutes after the first sneaker has been sold, it is already on the market for 750 euros."

If it were up to Thamar, the sneakergame could become more inclusive. "Stereotyping is a problem. I get really tired of the fact that all small sizes (because apparently only women have small sizes) are released in pastel colours, with gold jewellery and glitter," says Thamar. "And then you can say: there are also GS models, but they are just not the same as the adult version. As far as I'm concerned, they're scrapping the whole idea of women's/men's releases."

If she could change one thing about the current scene, it would be the hype aspect. By this she means the so-called exclusivity and the resell of it. "We all do it ourselves, don't we?", says Thamar. "But I just don't want to fight bots and all sorts of other automated raffle jokes, only to see that same shoe for €600 at a reseller somewhere," says Thamar.

"Honestly, for me, that's not the game, that's annoying, but smart, entrepreneurial. Which I sometimes take advantage of with healthy reluctance. But I keep thinking: if it hadn't been such a hype, I might have them for retail."

In the shoe cabinet

In Thamar's shoe closet, we come across many Nikes and Jordan's, as expected, including the 2016 Nike Air Max BW Persian Violet. The Air Jordan 1 High Pollen is just around the corner. Also the Nike Air Max 1 x Parra is still in the box. First up, she takes the 'Nike x Skepta Air Max Tailwind' out of the box. "Quite a few people are not really a fan of this model, but I think they are fantastic", she says, holding the pair in her hand.

The Jordan 4 'Olivia Kim', not to be confused with the Retro Black Cat, also comes to mind. "I found this one on a good deal on Vinted," says Thamar as she slides the Nike Air Max 97 'Silver Bullet' out of her closet. "People sometimes really don't know what gold they have on their hands when they sell something."

When asked which sneaker Thamar would still like, she answers with conviction: "The Nike Air Max 1 Elephant Atmos. That one is really high on my list." This turquoise with black Air Max 1 has come out in her size, but is almost unobtainable. "I saved up money for that pair once. I went to Deadstock Sneaker Market and thought; if I find them here I'll just get them and we'll never talk about it again."

In the end, she did not find the pair in her size. "Maybe it's just as well."