With Air to success - A Nike Air Max Story PART 1 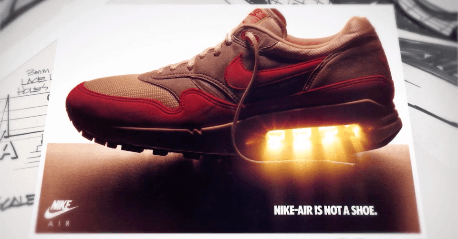 Essentially, the words "Nike Air" describe Nike's patented cushioning technology. This means that every model that has missed the "Air" cushioning technology is crowned with a "Nike Air" at the beginning of the shoe model name! But who invented this technology? And does the name "Air" really have something to do with air? All this and what the whole Nike Air Max series is about, can be found in our exclusive article "Air to success - A Nike Air Max Story"! Let's go! ?

It all began with an idea

Marion Franklin Rudy (that's the nice guy up there) was a talented aerospace engineer until the late 60s. But he wanted to use his knowledge for another industry after a certain time. At that time he started to present one of his newest and most promising ideas to various companies: The insertion of airbags into the soles of sports shoes to mitigate the impact. As with any success story, Rudy was of course initially confronted with much rejection and mockery for his idea. He proposed his airbag innovation to a total of 23 shoe companies and all of them rejected him and his work.

But then, in 1977, he presented his vision to Phil Knight. Who that is now, you can almost imagine yourself, if you think about it, that this will probably be the lucky turn for Rudy… - Exactly! Of course it has something to do with Nike! Phil Knight was the co-founder of the American brand.

Continue with the text: So Phil Knight gave Rudy a chance and had an Air-cushioned prototype shoe made. Immediately the co-captain of Nike took a test run from which he returned extremely fascinated. Nike has found the "Air"!

The birth of the first Nike Air shoe

But now further in context. The Air Max 1 is of course "THE ONE" and is actually the first Nike Air Max ever released. But it is not the first Nike shoe that has an airbag in the sole! This was the Nike Air Tailwind! This highly technical shoe was produced in a small quantity at the beginning or before a wider market introduction. For the Honolulu Marathon, Nike had supplied 6 Hawaiian running shops with the good pieces shortly before the big sports event. Then the shock - the 250 pairs of shoes were sold out within 24 hours! And all this at a retail price of 50 US dollars, which was expensive for those days! This is definitely proof that not only the hype about the Nike brand and design has kept the "Air" on the runners' feet until today.

To give you a better picture, here is a picture of the OG colorway of the Nike Air Tailwind from 1978:

You like that model? Well, this colorway is not to buy anymore, but there are some other cool colorways of the Nike Air Tailwind in our sneaker collection! For an overview click on the button below ⬇️

Nike Air Tailwind it is. As you can see, you can't see anything. No Air bubbles and no Air unit as we know it from our beloved Nike Air Max models. Until this point, Marion Franklin Rudy's new innovation was not yet fully developed, so it was hidden inside the sole. But the Nike heads noticed immediately that this is an innovation with a lot of potential!

At last! The first Nike Air Max delights the world!

As we all now know, the Air Tailwind was the very first shoe with integrated "Air" technology & the Air Max 1 was the first silhouette in the endless Air Max range. But what happened to cushioning technology in the 10 years that the Air Max 1 has been around after the Air Tailwind? And who the heck is this Tinker Hatfield who is always associated with "Air Max", why hasn't he been mentioned yet?

All these questions and also how the Air technology of this popular brand has changed until today, are answered in the second part of our Nike Air Max history "With Air to success - A Nike Air Max Story PART2"!