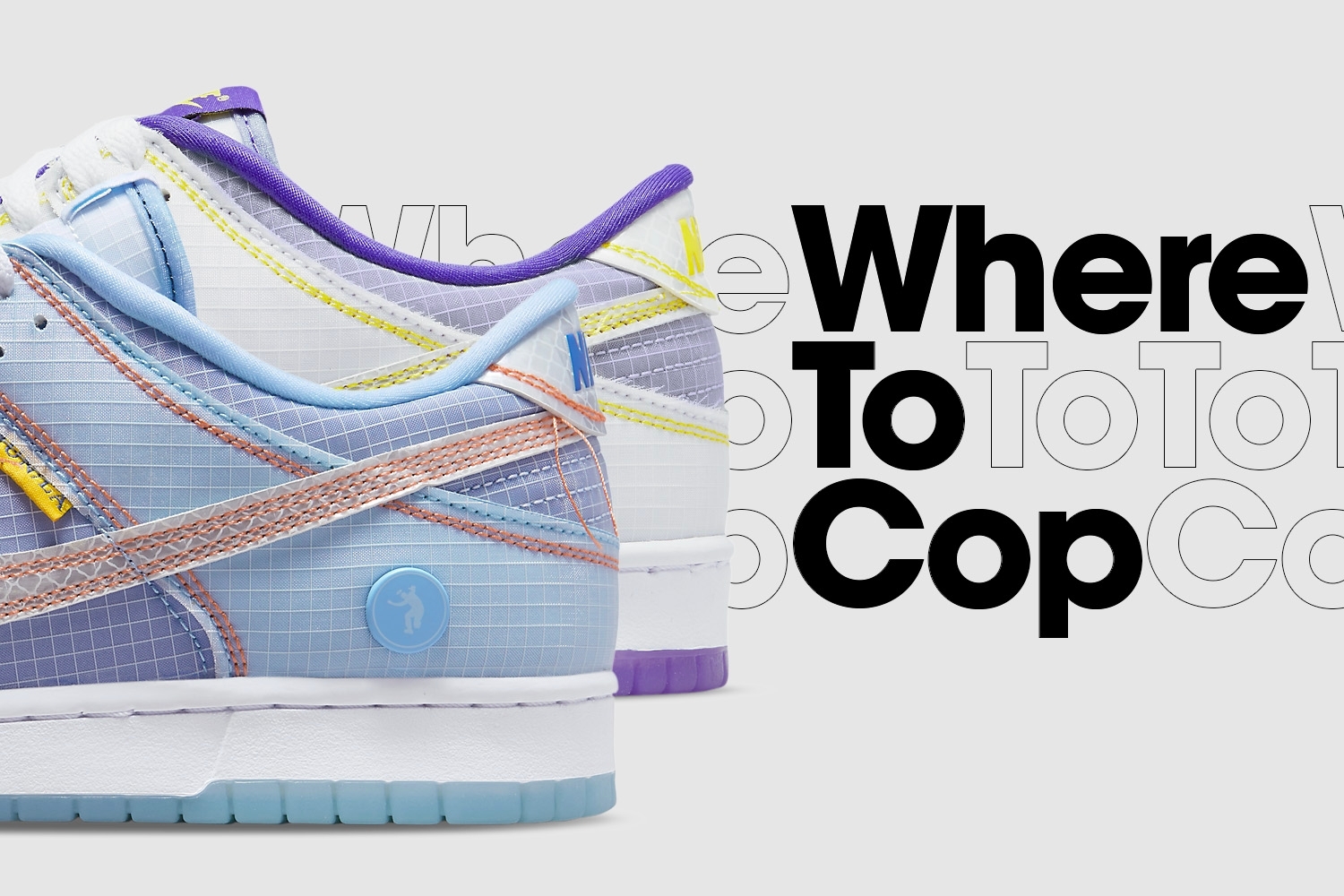 Images of a Union-Nike collaboration on the Dunk Low have been circulating for a long time. On Thursday, April 7, 2022 at 09:00 am, the time has finally come. The Union x Nike Dunk Low 'Argon' & 'Court Purple' will be released. To help you score a pair, we have compiled a list of all the shops where the kicks will be available.

Union and Nike have released collaborations before, but mainly on different Jordan's. The Dunk Low has now been given a striking makeover, but remains clearly recognizable.

A nylon ripstop material is used on the upper. This makes the checkerboard pattern appear on all elements. The contrasting stitching on the overlays and the Swoosh are equally striking.

The colour scheme of this colorway is ideal for spring. The toebox, side panel and collar are in purple and the overlays and heeltab are in blue. The tongue, on the other hand, is in white, as are the laces.

The midsole and outsole are also in the coherent theme. The midsole is white, but the outsole has an eye-catching detail. The outsole is semi-transparent, allowing you to see Union's logo in pink.

The Passport Pack includes another colorway, 'Court Purple'. Just like the other Dunk, this pair is also made of nylon ripstop. The colours on this one make the details of this material less noticeable.

The toebox, side panel and collar are in purple, as is the lining of the kicks. The overlays are in white, making the purple colour stand out more. On the overlays and on the Swoosh is a yellow contrasting stitching.

The yellow colour is found on the Nike branding, but also on the Union branding. The tongue and laces of this pair are in white.

The midsole of the pair is in white as well, as are the overlays. The outsole is semi-transparent in purple, an the Union logo has been given a red colour.

The Union x Nike Dunk Low 'Argon' will be released on Thursday, April 7 at 09:00 in the morning. The sneaker will then drop at Nike. Click on the image below to go directly to the release page.

Did you miss the release of the blue colorway? No worries! After the release, the sneaker will be available at various marketplaces. Click on the platforms below to check out the prices.

The Union x Nike Dunk Low 'Court Purple' will also be released on Thursday, April 7 at 09:00 am. Unlike the other colorway, this pair comes out at Footpatrol at that time. Click on the image below to go to their website.

The 'Court Purple' colorway will also be available through various raffles. During a raffle, the right to buy the sneakers will be raffled off and your chance to buy the pair is a little higher. The raffles below are already open, so sign up soon! To do so, just click on the image and you will be redirected to the relevant store.

Following the release of the Union x Nike Dunk Low 'Court Purple', the pair will available through various marketplaces. So don't worry if you miss out on the pair. Click on the shops below to go to their website and see the prices for each size.

The Union x Nike Dunk Low 'Argon' and 'Court Purple' will be released on Thursday, April 7, 2022 at 09:00 in the morning. Make sure you set your alarm to score the pair. If you follow us on Instagram, yo will again receive a reminder for this drop. You can check out the full list per colorway via the buttons below. Good luck with buying these pairs!