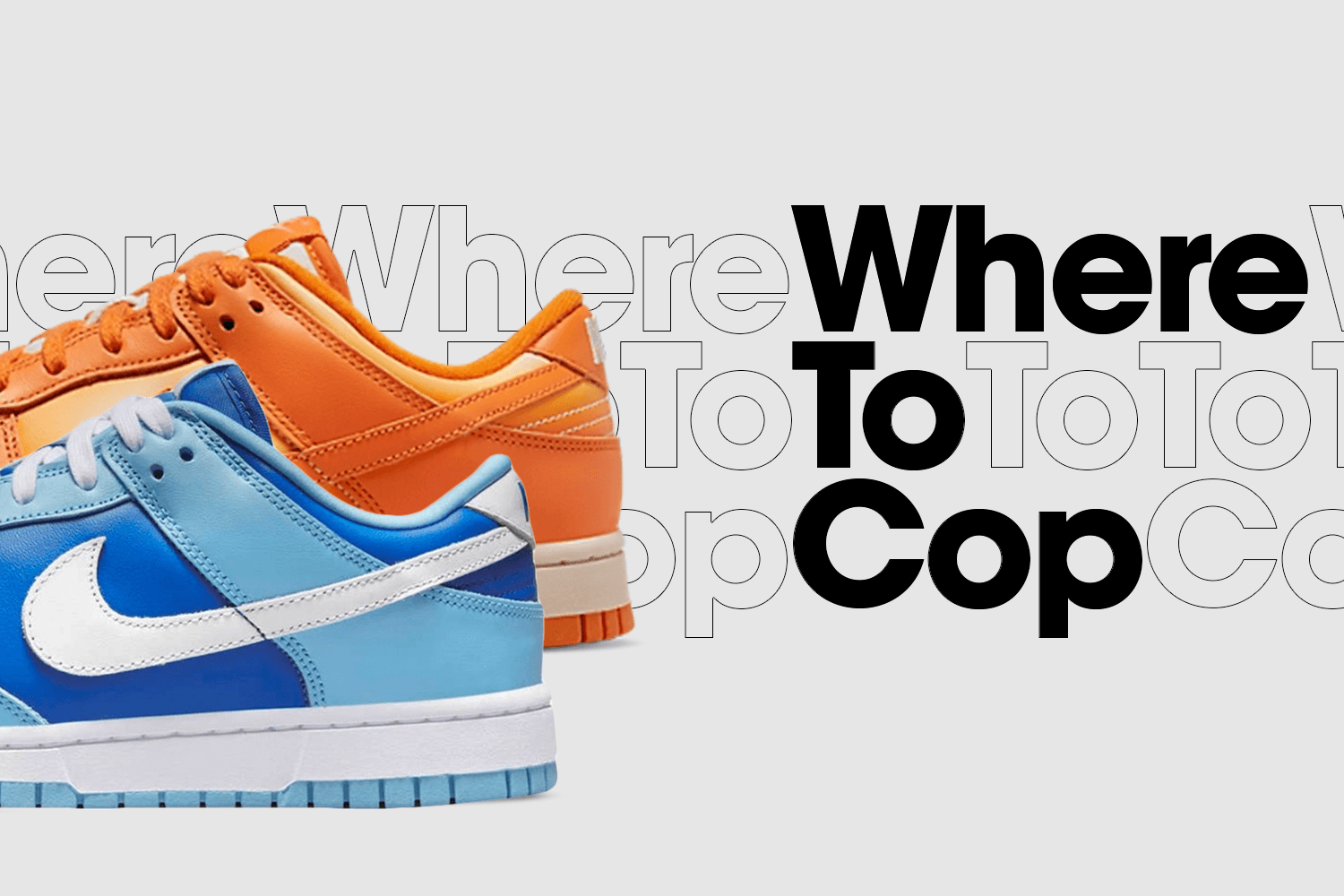 New colorways of the Nike Dunk Low just keep coming (which we don't mind at all). This time Nike is releasing not one, but two colorways simultaneously. The next colorways in line are the 'Orange Magma' and the Retro QS 'Argon'. Both sneakers will be released on Friday, 23 September 2022, at 09:00 a.m. via Nike and select retailers and will set you back €130,-. We collected all the retailers and raffles for you in this article to enhance your chances of copping!

The first of the two colorways is the Nike Dunk Low Retro QS 'Argon'. As the name already says, this is a QS release. QS stands for Quickstrike, these are releases that have a more limited quantity and thus will be more difficult to cop. But don't worry, with the help of our Where To Cop article, you have plenty of chances!

The 'Argon' colorway is a cult classic in the world of Nike enthusiasts because the colorway is usually exclusive to Nike's CO.JP line. That's a line that focuses on the Japanese domestic market. The 'Argon' was released as part of the CO.JP collection in 2001, and now it's hitting the worldwide market. That's also why it's a retro and QS release.

The sneaker features a leather upper which consists of a dark blue base layer with lighter blue overlays. The midsole, laces, tongue tab, heel tab and Swoosh come in contrasting white. Branding on the heel and tongue tabs appears in the same dark and light blue colors respectively. The 'Argon' will release as a general release in PS and TD sizes as well.

The other release on the same day is the Nike Dunk Low 'Magma Orange'. This is one specifically for the ladies! Just when we thought, after the 100s of Dunk colorways released in the past few years, that we have seen it all, Nike comes and surprises us once again!

The 'Magma Orange' is indeed a special pair. It's distantly reminiscent of the highly popular and limited Nike Dunk Premium Haze designed by Eric Haze, a NY-based graffiti artist, in 2003. Only about 1.000 pairs were produced of that model. Just like the 'Premium Haze', the 'Magma Orange' features a gradient design that reminds us of graffiti.

As previously stated, the 'Magma Orange' features a graffiti-like gradient design on the collar, heel, centre panel and the toe. On top of the gradient base layer, we can see 'Magma Orange' overlays and the usual white, Nike branding on the tongue and heel.

The Nike Dunk Low Retro QS 'Argon' will be available starting on Friday, September 23, 2022, at 09:00 a.m. sharp. So, make sure to set an alarm if you don't want to miss out on this special colorway!

Click the images below to be redirected to the corresponding retailers!

The Nike Dunk Low Retro QS will also be available at select retailers via raffles. Raffles are a popular way of releasing sneakers nowadays. For those who don't know: Raffles work like a kind of lottery where you can register and on the day of the release the stores will let you know whether you have been chosen to be able to buy the shoe or not.

Below you'll find a list of retailers that are running a raffle for the Nike Dunk Low 'Argon'. You can enter by clicking the stores:

If you missed out on the initial release of the Nike Dunk Low Retro QS 'Argon', don't worry just yet! There are various marketplaces where you can still buy the sneaker.

The Nike Dunk Low 'Argon' will also be released in younger kids' sizing via Nike for €75,-.

Besides the PS sizing, the 'Argon' will also be released in toddlers sizing so the whole family can be matching! The price of the TD pair is €65,-.

Besides the 'Argon', we have the Nike Dunk Low 'Magma Orange' which will also be released on Friday, September 23, 2022, at 09:00 a.m. So, once again, make sure you set up your alarm because you'll lose if you snooze!

Check the list below to see all retailers for the 'Magma Orange'.

Just like the 'Argon', the 'Magma Orange' will also be available via various stores by the way of raffles. If you don't want to wake up early, then raffles are the way for you. You can register the night before and hope that you'll be chosen. Attention: Afew Store releases the sneaker only on the 1st of October, 2022!

In case you overslept AND got unlucky with the raffles, but you really want to cop the 'Orange Magma', we still got you!

Below is a list of all marketplaces where you can buy the sneaker after its initial release!

Just as a last reminder, both the Nike Dunk Low 'Orange Magma' and Retro QS 'Argon' will be available on Friday, 23 September 2022, at 09:00 a.m. so don't forget to set up your alarm, or alarms if you're like me! Otherwise, you can also register for the numerous raffles the night before and take your chance like that.

With the buttons below you can check the release page of each sneaker, it's good to keep an eye on these in case some retailers are added or removed!

And lastly, don't forget to check out the Sneakerjagers Instagram where we always post release reminders for the hottest releases!