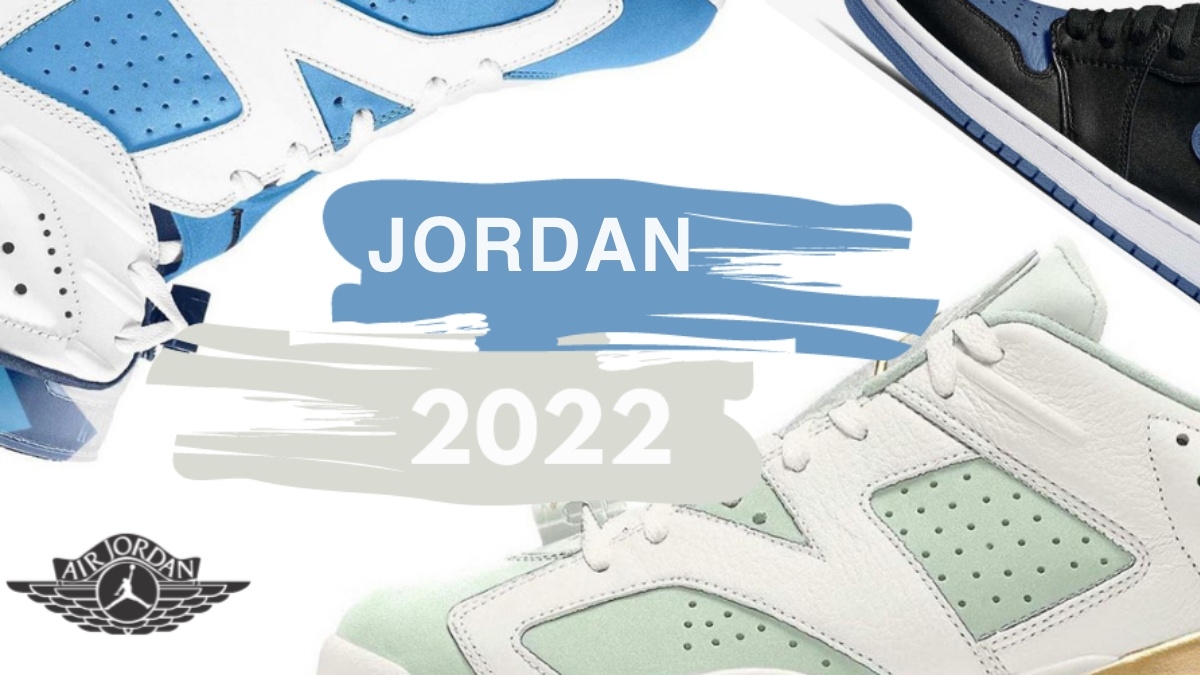 We're now entering the first half of the year, and the design studios of our favourite brands are already heating up for the new seasons. Rumours are already flying about the Air Jordan line-up for spring 2022, so let's take a closer look at the insider leaks!

What can we look forward to?

It looks very much like a new Air Jordan 5 collab, but more on that later. In fact, it is still unclear who or what the Jumpman Brand will be collaborating with. We are also expecting a UNC colorway of the Air Jordan 6 in spring 2022. In addition, the Air Jordan 15 will return in a sand-coloured variant and there will also be many low models next spring season, including the AJ 5 and AJ 6.

According to the leaks, we can already look forward to three Air Jordan 1s in early 2022. On the schedule are the Air Jordan 1 High OG 'French Blue' Air, 'Black, White & Cool Grey' and the 'University Gold'. Check out the possible versions now:

There will also be an Air Jordan 1 Low 'Golf' coming soon. The colorway of this low will be similar to the Air Jordan 1 Dior, but unfortunately there are no photos for these kicks yet. We remain curious.

The Air Jordan 3 you see here is a possible release for spring 2022. The name of this colorway is unfortunately not yet known.

We are expecting different versions of the Air Jordan 4 Golf, all featuring special colorways. Besides the 'Black Cat', another colorway is on the way. The 'Military Blue' might come in a combination of white and light blue, which you can see in the picture.

Furthermore, we can look forward to an Air Jordan 5 Low SP. The fact that it will be an SP strongly suggests a collaboration. The colorway is already confirmed, but the collaborator is not yet. So far there are no speculations or rumours about this collaboration either. Unfortunately, all we know so far is that the Jordan 5 Low will probably be launched in spring 2022.

The Air Jordan 5 Retro Low 'Wings' is very similar, differing only in colour from the announced AJ 5. Unfortunately, there is no release date for these kicks yet either, but we do know that they will indeed be released in 2021.

In 2022, there will be a big focus on the low variants, as we have already announced. So this AJ 6 Low will most likely be a women's version. On the picture you can already see the final colour version.

In addition to the Low, there will also be an AJ 6 High: the Air Jordan 6 'UNC'. The UNC colorway will be released in full family sizing, but the exact release date is still unknown. Psst: UNC stands for University North Carolina and symbolises Michael Jordan's college team, which is why the colorway is ultra hot!

For the 30th anniversary of the Air Jordan 7, a pack with different colorways will be released next spring. However, we are still dreaming about the colours that will be used. What would you like to see? What we do know is that the pack will feature both male and female models.

This Air Jordan 11 Low is also expected to be released in spring 2022 alongside all other Air Jordans. Suede is used on the upper instead of leather, giving it a clean look. This model is inspired by the Air Jordan Retro 11 '72-10' that came out a few years earlier.

Next year, we can also look forward to the Air Jordan 13 in this colorway. The kicks will be released in a fresh colour combination, perfect for spring and summer. They are a reversal of the Air Jordan 13 'Melo Class of 2002', which came out in 2018. There is still hot speculation as to whether the sole will come in white or black, because the sole of the 'Carmelo Class of 2002' came out in the same colour as the rest of the shoe.

Last but not least, and rounding off this fantastic outlook beautifully, there will be a new Air Jordan 15 variant. This sand-coloured AJ 15 will be released next spring as a SP, which already hints at another collaboration… This Jordan will also be a WMNS model. The materials used are not yet confirmed. The shape of the silhouette is actually inspired by a fighter jet, which can also be seen in the photo with a little imagination:

Now that's some serious heat that makes us long for a time jump, what do you think? If you can't wait to read more updates on the Jordans and all sneakers, then check out our Sneaker News and the Sneakerjagers Release Calendar.