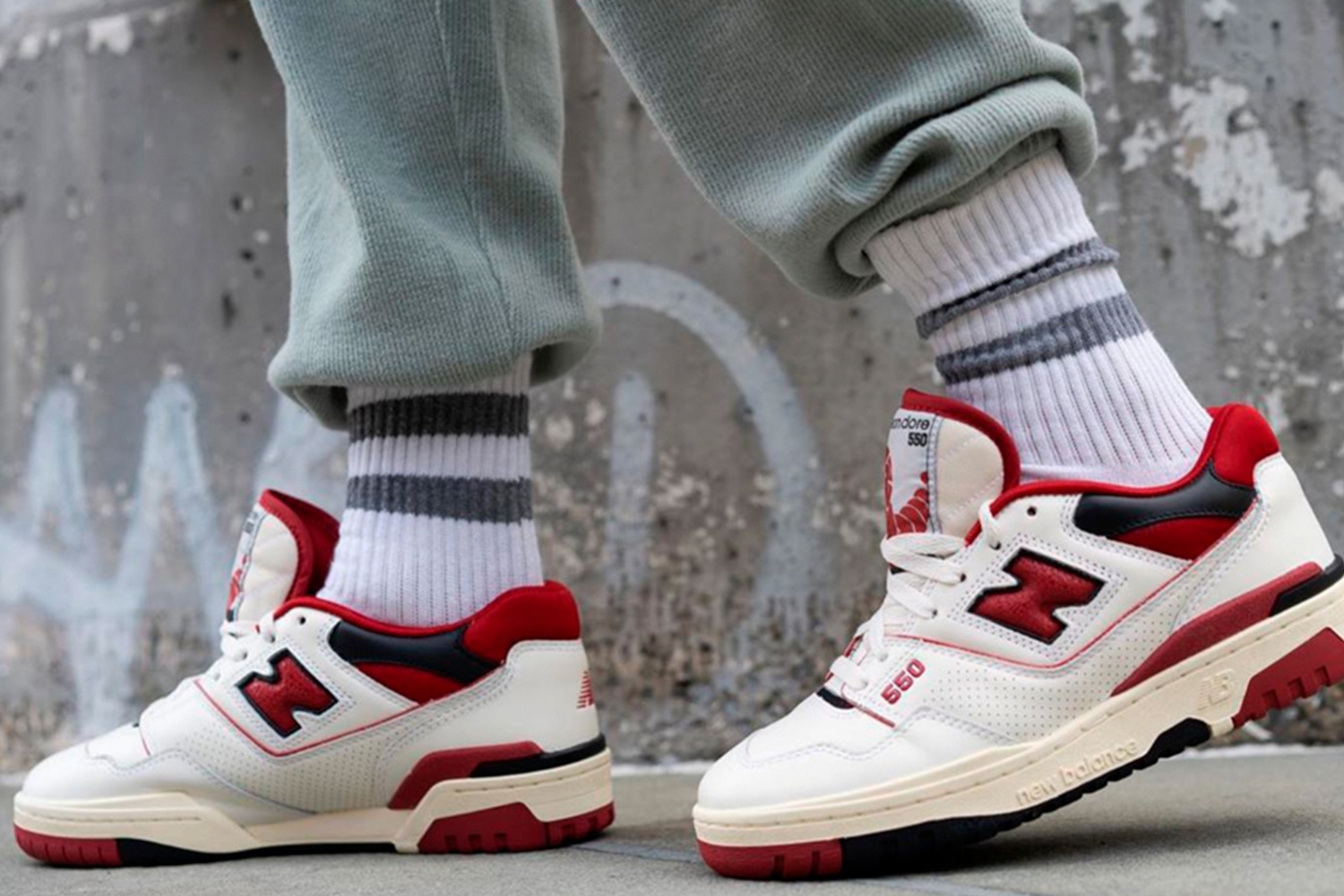 The sneakerjager community has gathered here today to celebrate a very special shoe: the New Balance 550. For hype reasons, here comes the ultimate New Balance 550 FAQ to give you everything you need to know about the classic that might not be a classic at all (that's what some nasty tongues say).

Before we get into the most important information about the NB 550, you can check out the models that have already been released by clicking on this button, but be warned, these things are selling faster than hotcakes. If you can still get hold of something in your size, you should grab it.

When did the first New Balance 550 come out?

The New Balance 550 was originally released in 1989 as a basketball shoe under the model name 'P550'. At that time, the sports shoe, which like almost all basketball shoes has a two-toned colourway, did not achieve the fame it had hoped for and the hype failed to materialise.

More than 30 years later, however, New Balance made sure that history would not repeat itself. Especially due to the vintage and retro trend, the silhouette is now a box office hit.

Like most New Balance models, the NB 550 is true to size. If you have a wide foot, it makes sense to buy the shoe in half a size larger. The chunky sole makes this model very comfortable and suitable for everyday walking.

What materials is the NB 550 made of?

The upper is made from high-quality, smooth and perforated leather and the breathable mesh lining is on a rubber sole. The two-tone, high-profile outsole and minimalist NB logo give this almost forgotten legend a vintage look to match.

The standard models with 2-tone colorway and without collaboration retail at €130. Special models and collaborations are usually around €150.

What does Aimé Leon Dore have to do with the NB 550?

According to Teddy Santis, the brand's founder and director, the Aimé Leon Dore x New Balance 550 was the first ever redesign of the 30-year-old silhouette, contributing to the new hype surrounding it.

The Collab' models currently come in five different colorways, which are only available at the Resell. We expect more to come, so stay tuned!

With its sporty and clean appearance, the NB 550 can of course be combined very nicely with tracksuits and joggers, as well as with collge hoodies or jackets. But the sneaker can also be very elegant and is especially popular in womenswear with bootleg trousers and oversized blazers.

After the New Balance 550 FAQ has answered all the important questions, there is still one question left. Because the 550 was so unpopular when it was released, there are hardly any pictures of it on the internet. That's why the hot discussion started on the reddit platform whether the New Balanco 550 is really from 1989.

The doubts are understandable… the OG basketball shoe, such a big brand, which celebrated its comeback in 2020 and hit like a bomb, is not to be found on the internet?

True! However, the community has looked into the matter and ultimately has the following explanation:

The NB P550 from back then was either released under a different name, for example as a low version of the New balance 650, or it was hardly seen on the European market.

Eventually, sketches and illustrations were found in a Japanese catalogue that Teddy Santis of ALD had seen and based on that he rebuilt the silhouette.

It's a little mystery that makes the shoe all the more valuable.

What NB 550s are releasing soon?

Two more NB 550 colorways are waiting in the wings… unfortunately without a release date at the moment - but you know where you'll find out first, don't you? In our release calendar of course. Be sure to check it regularly 🙂

Get the Sneakerjagers app and never miss a New Balance 550 again.