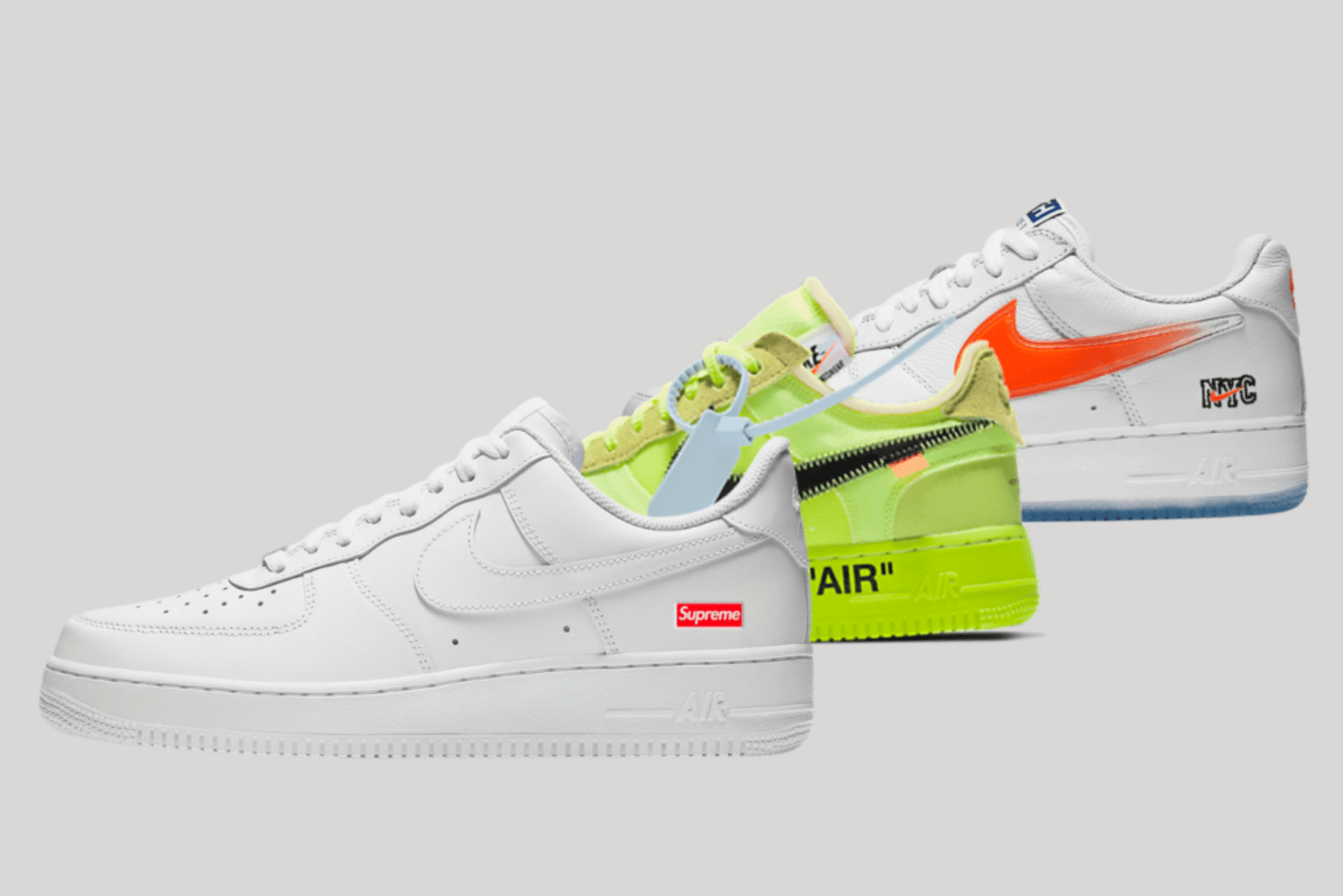 The Nike Air Force 1 is a sneaker legen and therefore has had a lot of releases, collabos and colorways. This model first came out in 1982 as a basketball shoe, but was quickly picked up by the sneaker community. This year, the pair celebrates their 40th anniversary. The different Air Force 1 models are also available on StockX after each release.

For those who don't know: StockX is an online marketplace for sneakers, streetwear, electronics, trading cards and handbags. You can offer deadstock items there yourself, or you can also buy them. StockX has its own authentication team that evaluates each item for authenticity. So you know that your purchase is real and not a fake.

All Air Force 1s at StockX

The Supreme x Nike Air Force 1 'White' was released in 2020. The upper of this AF-1 is almost the same as the mora than famous 'Triple White' colorway. The only difference is the Supreme Box Logo on the heel in red.

Get the Supreme collab here

The Nike Air Force 1 Low WMNS 'Triple White' (2018) is one of the most popular sneakers ever. The kicks have an upper made of leather that is entirely in white. The simplicity of the shoe and color makes the sneaker easy to style with different outfits.

Get the 'Triple White'

Supreme and Nike have also given the Air Force 1 a 'Wheat' colorway. This style comes back every autumn at Nike. Check out more Air Force in 'Wheat' in our sneaker search engine. The upper is made of a soft suede and here the heel is the Supreme Box Logo in red, which makes this style stand out again.

The Nike Air Force 1 Low WMNS LX 'Lucky Charms' is designed especially for the ladies. The white Air Force 1 has been given a gold detail. A gold chain hangs from the collar with gold charms that are in reference to the AF-1. The Nike branding on the heel has also been given a golden colour.

Get the 'Lucky Charms' here

The Nike Air Force 1 Low '07 'Pine Green' has different materials on the upper. Almost the entire upper is made of leather, except for the side panel and heeltab. The side panel is canvas and the heeltab is a soft terry cloth. The Swoosh, heeltab, tongue and lining are in green.

The Nike Air Force 1 Low 'Popcorn' is all about the movie snack and is still available on StockX. The upper of the sneaker is in butter yellow, which is one of the trend colours this summer, 2022. The branding on the heel tab is red. On the tongue is a red and white striped print, which refers to the popcorn trays you get at the movie theater.

Sneaker boutique Kith has given the Nike Air Force 1 Low a Knicks theme. The colours of the New York basketball team are blue and orange. The Swoosh on the outside is in orange and on the inside it is in blue. The rest of the upper is made of leather in white.

The Off-White x Nike Air Force 1 Low 'Volt' was one of the first AF-1s the two brands released together. The upper of this sneaker is in a bright yellow colour. The Swoosh is in black and so is the extra 'Air' branding on the midsole. Also, a the famous tag hangs from the laces, this time in blue.

The Nike Air Force 1 '07 Craft 'White' has a minimalist look. The upper of the shoe is made of leather and is entirely in white. On the heel tab, suede is used in a grey colour, which adds more dimension to this pair.

Get the Craft 'White' here

We conclude the list of the best selling Nike Air Force 1 on StockX with the Craft 'Photon Dust'. The upper of this sneaker is made of leather and in white. The Swoosh is made of suede and is in grey. On the heel tab a fishbone pattern can be seen, also in grey.