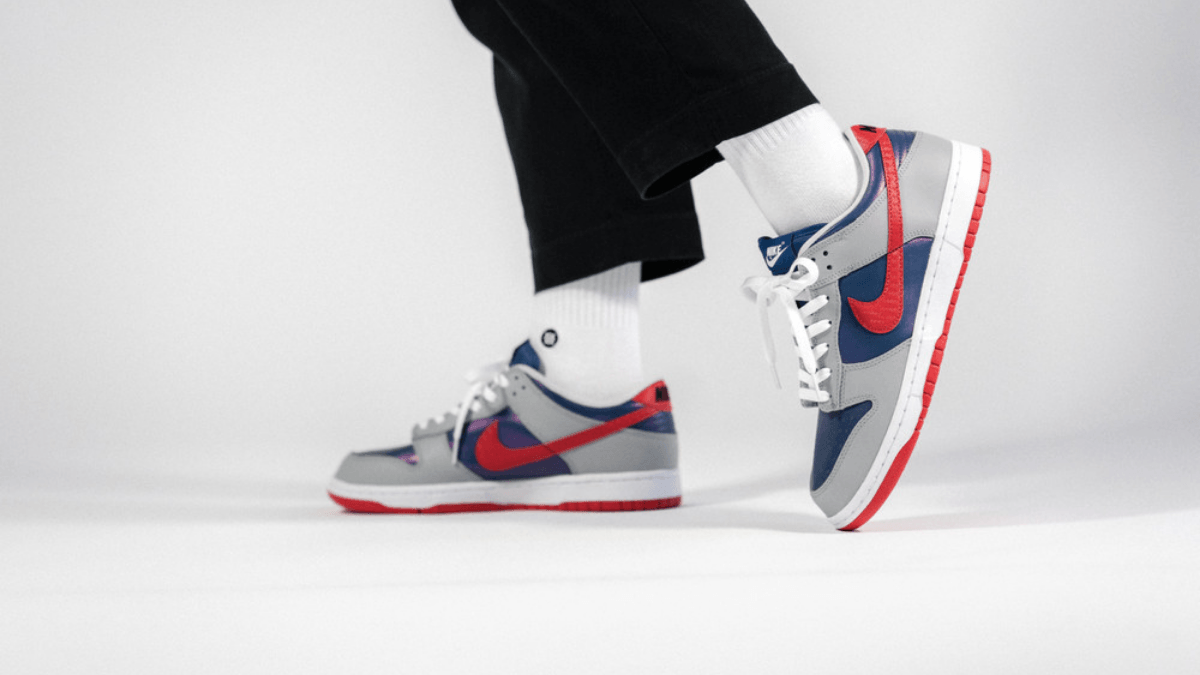 There he finally is! For many months it was rumoured, that the 2001 released Nike Dunk Low SP 'Samba' will make its comeback this year. And now it's here! This week the Dunk Low hype continues and features a sneaker that will make many collectors who couldn't get the shoe before extremely happy. The Kickz were NOT released anywhere in Europe before. More about this and more pictures of the fire Kickz can be found further down in this blogpost. But now let us head to the release date and other release info! 🙏🏼

The Nike Dunk Low SP 'Samba' will celebrate its comeback on Friday, August 21, 2020 at 09:00 a.m. at Nike and also at 'select retailers'. Have 100€ ready for the release and make sure to sign up in advance for the raffles of the different retailers. You can find a list of all retailers/raffles by clicking on the button below. ⬇️

What? Japan Exclusive? So only available in Japan?😫
No worries, dear community, the shoe is 'originaly released in 2001', meaning the kickz came in 2001 as Japan exclusive! But this year EVERYBODY can get that beautiful Colorway and, with a little luck, you will be able to welcome them to your collection soon!😍

True-to-the-original:
The upcoming Nike Dunk Low SP 'Samba' will, as usual with a re-release, come out in the same colorblocking as the pair that was released in 2001 'as Japan exclusive'! But the shoes will not only get the same colors and materials as before. We get the exact same colorway with all its individual features and details! 🙏🏼

Probably the most inconspicuous and yet most noticeable detail when you see the shoe on feet, is the base material. This is where the beauties have been given a special 'carbon fibre' coating on the hyper-blue smooth leather! (You can take a closer look at it further down in the blog post.) On top of that the kickz got nice grey overlays, which are also made of smooth leather. To make the whole color mix complete and to create a perfect combined colorway, the Dunk Low's got a swoosh, as well as the typical heel element and the rubber outsole in a bright red. A white midsole + white laces complete the whole design and make the Nike Dunk Low SP 'Samba' a very desirable pair of shoes! 🔥

A must-have! No matter if you are a collector and need the sneakers for your Dunk Low Collection or if you are just a newbie who is living the Dunk Low hype right now…this colorway is a bomb! 💥 I am a fan, especially because they use more than 2 colors on the upper. And with the fact, that these colors fit together perfectly and also come with a shimmering effect on the base…uff! Go get 'em!

Alright. That's it with my short overview about the release of the Nike Dunk Low SP 'Samba'. I wish you all the best of luck! If you want more news from the gossip factory of the sneaker world and even more Nike Dunk Low hype stuff, check out our >>Hyped Releases<<! ENJOY.❤️

Here you have the pictures I promised you: