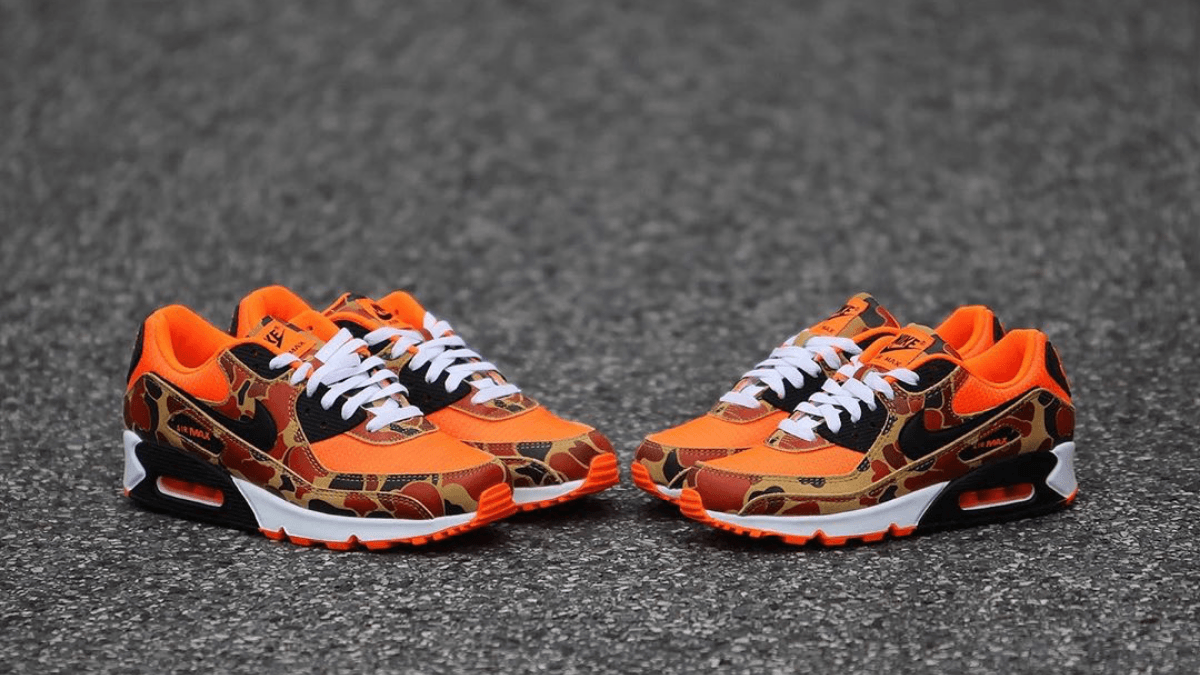 All good things come in threes! And that's why Nike is putting out a third and final colorway in this year's Duck Camo series for the 30th anniversary of the silhouette of the Nike Air Max 90! The nice Air Max will come with an orange base! So the Nike Air Max 90 Duck Camo 'Total Orange', or Nike Air Max 90 'Orange Duck Camo', will be the next highlight of the three Duck Camo releases. But more about the colorway later. Here you get the release info:

The new Nike Air Max 90 Duck Camo 'Total Orange' celebrates its long awaited release on Tuesday, June 16, 2020 at 09:00 am at the usual retailers as well as on the Nike homepage. For a well invested €140 you can have the beautiful Air Max delivered directly to your home on the release date with a little luck.

We have already compiled a list of all retailers who will sell the shoe. Check it out! Click on the button below to go directly to the overview in our Release Calendar.

Alright. As I already mentioned this special Air Max has two predecessors in the last months. Below you will find the links to the blogs about the 'Reversed Duck Camo', which is inspired by the Atmos x Nike collab, as well as the 'Ghost Green'.

As the name suggests, the beautiful pair of sneakers in orange will be at the start. The sneaker has been given a bright orange tone on the mesh upper. The sole, air bubbles and the seam on the tongue also come in this eye-catching color. The highlight of the shoe is of course the legendary Duck Camo print! It comes as an overlay over the total orange base in beautiful brown shades. To complete this harmonic colorway Nike has added white laces and a bright white midsole. Black accents, like the black leather Swoosh, complete the cool design.

More detailed pictures can be found below.

Awesome thing! Personally, I'm a fan of the Duck Camo print anyway and an Air Max head too. So I can't really give an objective opinion. Sorry ? But one thing i can tell, is, that the Nike Air Max 90 Duck Camo 'Total Orange' is a must-have for all those, who have already bought the previous Duck Camo models and want to complete a fire collection!

That's it from me again. I wish you a nice weekend & underneath you'll find the promised blogs about the two predecessors of this gem. Enjoy!