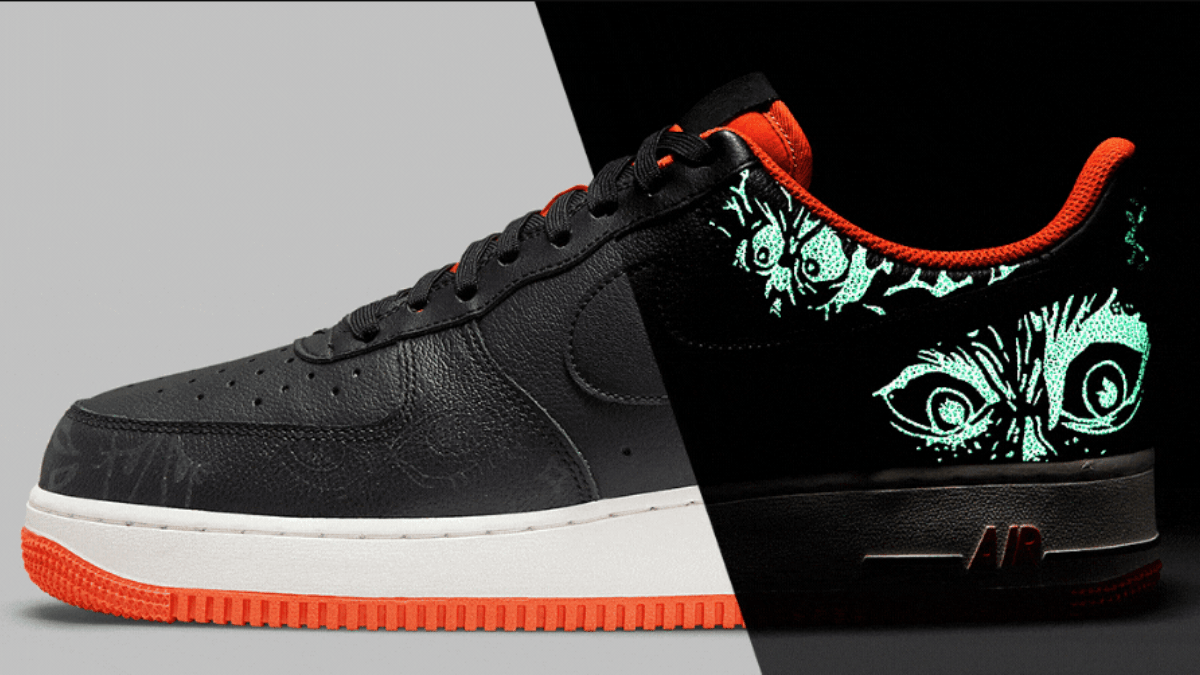 The line-up of Nike Sportwear's Halloween Pack has been released. This list includes four different pairs of sneakers with Halloween as their theme.

The Halloween Pack from Nike includes the Dunk Low, Air Force 1, Air Force 1 Experimental and Air Presto. These pairs feature creepy graphics that will immediately get you into the Halloween spirit. All silhouettes use the same black, orange and grey tones.

The Swoosh, tongue and lining are orange and stand out most in the light. The toebox, side and heel are white, making the orange elements stand out even more.

The Nike Dunk Low PRM 'Halloween' will be released on Thursday 21 October at 09:00.

Just like the pair above, this Air Force 1 has creepy glow in the dark illustrations on the overlays on the upper. The entire upper is made from leather and is in black. The tongue, lining and outsole are orange. Unlike the Dunk Low, the outsole of this pair is not noticeable in the dark.

When you step into the dark with this AF-1, different types of eyes will appear on the overlays. These eyes can also be seen in the light, but less clearly.

The Nike Air Force 1 'Halloween' is expected in October.

This Air Force 1 Experimental is completely covered with the creepy eyes that are on the pairs in this pack. Over the upper of the Air Force is a plastic layer with these eyes. The entire upper is glow in the dark, so the eyes are now in black. The midsole and outsole also stand out in the dark.

The tongue and lining of this pair are black. The orange colour returns around the laces, on the tongue and on the pull loop.

The Nike Air Force 1 Experimental 'Halloween' is expected in October.

This Air Presto of course comes in the same black, orange and grey shades. The upper is entirely in black, with orange stitching. On the right nose is the Swoosh and on the left nose a spider. The heel cap features the illustrated eyes.

Unlike the other pairs, the Air Presto does not contain glow in the dark elements. The midsole of this pair is white, with an orange outsole.

The Nike Air Presto 'Halloween' is expected in October.

Do you want to be always up to date with the latest developments in the sneaker world? Follow us on Instagram and download the Sneakerjagers app. In the app you can keep an eye on the release calendar and read our blogs.