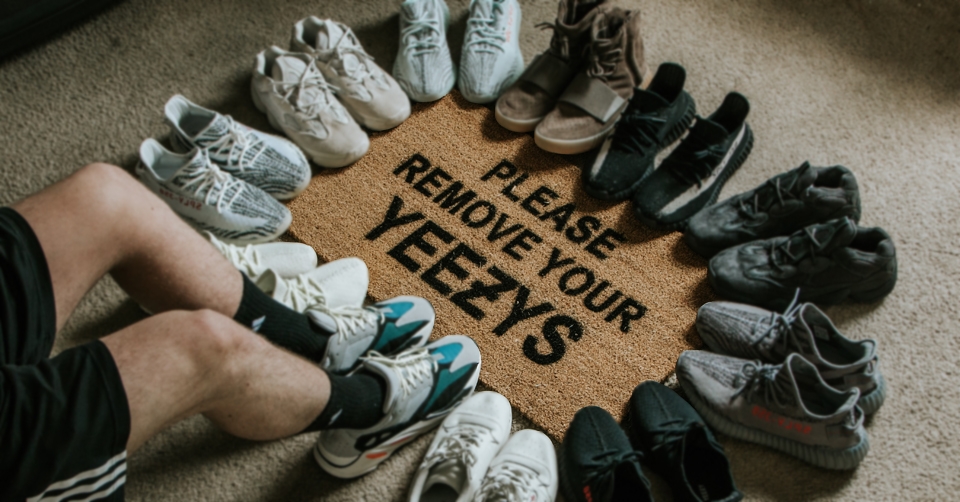 So dear community, we just arrived to the last part of the Kanye West storyline. Wait, you didn't read part 2? Or even worse, you slept through the first part completely? Just click here on 'Part 1 please' or 'Ready for Part 2'. So as you all know, Kanye West is still producing the Yeezy under the wings of adidas. The hype about the Yeezys still exists, but it's not like in the past! Why? Mr. West mentioned in an interview that he took the adidas deal because of his daughter. His goal still hasn't changed and he wants to make the Yeezy available for everyone!

In one of his earlier interviews Kanye mentioned that many kidz have been robbed or even killed for the Air Jordan. Mr. West doesn't want that, he wants the 'Yeezy silhouette' to be available to everyone without barriers or problems. So don't wonder why the 'Yeezy' appears more often now. It was his plan right from the start! Kanye and adidas built the hype around the shoe so that everyone in the world knows the word 'Yeezy'. However, this also means that the shoe no longer has a high 'resale value'. But that's not what Mr. West is all about, he's following his own path - spread the love for sneakers!

By the way: Have you already read the first part and the second part of this 'Triology'? If you haven't read them yet, then click on the respective button below!

We have already covered the story of Kanye West in the previous parts, so let's dive right into the fun and list all the Yeezy models here!

Disclaimer: The 'Yeezy models are sorted by release year, after that comes the 'first release' from the model! Enjoy the timeline!

The adidas Yeezy Boost 750 was the first Yeezy that Kanye released under the wings of adidas. It was a limited release and Mr. West organized a big exhibition for it.

Also in 2015 Kanye released the famous and still popular Yeezy Boost 350 silhouette! Did you got a pair of them at that time?

At the end of the year, the adidas Yeezy 950 was released with a silhouette more like a military boot than a sneaker. See for yourself!

In 2016 the second generation of the Yeezy Boost 350 was released! The cut of the V2 compared to the V1 is higher and the Primeknit now has a stripe! The adidas Yeezy Boost 350 V2 silhouette is still very popular nowadays and that's the reason why adidas released many colorways of this sneaker!

Kanye redesigned the retro adidas sneaker from the 1980s and created the 'Calabasas'! What this shoe makes special is the premium leather, as well as the 'Calabasas' logo on the 3 stripes branding. Looks like a successful redesign! Don't you think so?

There is not much to say about this Yeezy silhouette, because this model differs from the standard 'Yeezy'. Kanye produced a futuristic shoe here, with a mix of overlays and panels.

As the adidas Yeezy Boost 700 was a success, adidas launched the V2 in 2018. The sneaker had not changed much from its predecessor, except for a few details!

The adidas Yeezy Desert Boot was launched in 2019. The look inspired for the 'Coachella' festival was combined with the shoe. What was Kanye thinking?

Actually, adidas wanted to call the model 'adidas Yeezy 350 V3' when they released the new sneaker. However, the somewhat unusual and out of this world sneaker came out. The name of this sneaker is now Yeezy Boost 380. What is especially striking about this sneaker is the thicker Boost midsole.

adidas and Kanye have come up with something special for the 3rd version of the Yeezy. Apart from the fact that they threw out the old concept and reworked the model, nothing more can be said. Although the sole is no longer the usual 'Boost' sole, because a different material was used for it. The sneaker is also surrounded by a 'cage'. Weird but nice!

The adidas Yeezy Boost 700 MNVN got a new facelift from its designers. The upper is not made of leather, as in its predecessor models, but of nylon. Apart from the nylon, the sneaker got the '700' branding with new overlay elements on the toe box. Have a look at the gem for yourself!

New in the Yeezy round are the recently released Yeezy Slides! You want to know more about them? Have a look at Josy's blog 'Let's slide into summer with the adidas Yeezy Slides'!

The new adidas Yeezy Quantum is already in the starting blocks. For the first time Kanye designed a sneaker for the basketball court. Whether the sneaker will be a success like the previous Yeezys remains uncertain.

By the way: The Yeezy Quantum is expected to be released on May 15, but keep an eye on our Release Calendar. Because there, we will keep you up to date!

So the 'Kanye West Yeezy' triology ends and I hope you enjoyed it. By the way don't forget to visit our Sneaker News Site for upcoming News!