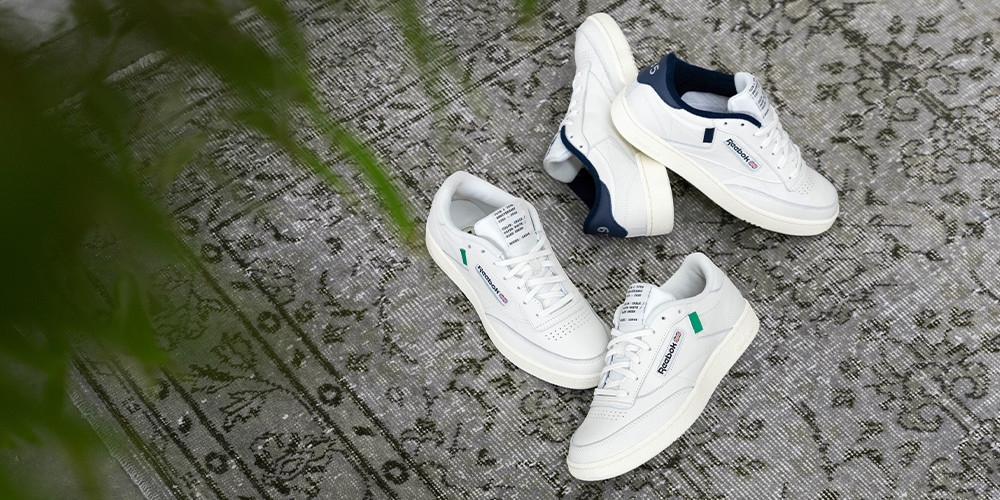 Congratulations! The Reebok Club C exists already since 35 years. In contrast to many other things, who come into fashion and leave in the same speed as they came, the Club C is a resistive constant in the sneaker culture. Such a performance has to be celebrated! On the occasion of the anniversary of this icon we are getting 2 new special editions of this timeless silhouette. And now, because of the anniversary, we will take some time to celebrate the Club C 85, its age and its timelessness.

35 years of Reebok Club C - The sneaker for the anniversary

As you can see on the picture, both sneakers have the iconic Reebok Club C 85 silhouette. On the outer side there are a green and a blue color patch. The publication year is separated into two parts, which you can find on the heel-tabs. Additionally, you can't pass the inside-out style! For example, you can find the label with the model name, the colorway and the model number on the tongue of the shoe. Suitable to the anniversary we get a hang tag. You'd like to check out the retailer? Klick the buttons!

The end is not defined by the beginning

The year 1985: The sunken Titanic was discoverd by two marine explorers, the german football icon Lukas Podolski was born and the 17 year old Boris Becker was the first German, to win the Grand-Slam-Tournament in Wimbledon. And what happened to Reebok? They originated the Club C. A sneaker, designed for the World of Sports on tennis courts. Now it is 2020 and 35 years are gone. Everyone in this age knows, what could happen and what could change in this time. With 35, you often have the hardest things behind you and look forward to an exciting time. And with a view to this exciting time, we can take some time to look back to the development of the Club C.

The turn to a timeless icon

As mentioned the Reebok Club C was created for the tennis court. With its minimalistic style, fitting and function it corresponds to the dress code of many tennis clubs and offers everything an athlete needs. In addition to that, everybody loves the Club C for its high quality and comfortability. No doubt that the potential of this sneaker was soon to be used outside the court. Through the years many new versions and colorways of the Club C were created. But the sneaker has always remained true to its roots, that's why people have always been aware of the power of the clean and timeless style. And today we are looking at a true icon - a shoe with character and great prestige.

Here you can find some colorways of the Club C!

The Reebok Club C 85 became a must-have! And thanks to its simple style, the shoe can also be styled wonderfully! What you could wear with this iconic sneaker is revealed by Instagram:

Once again, congratulations to Reebok and thank you very much for bringing such a timeless sneaker to the world! To many more years with the Reebok Club C!