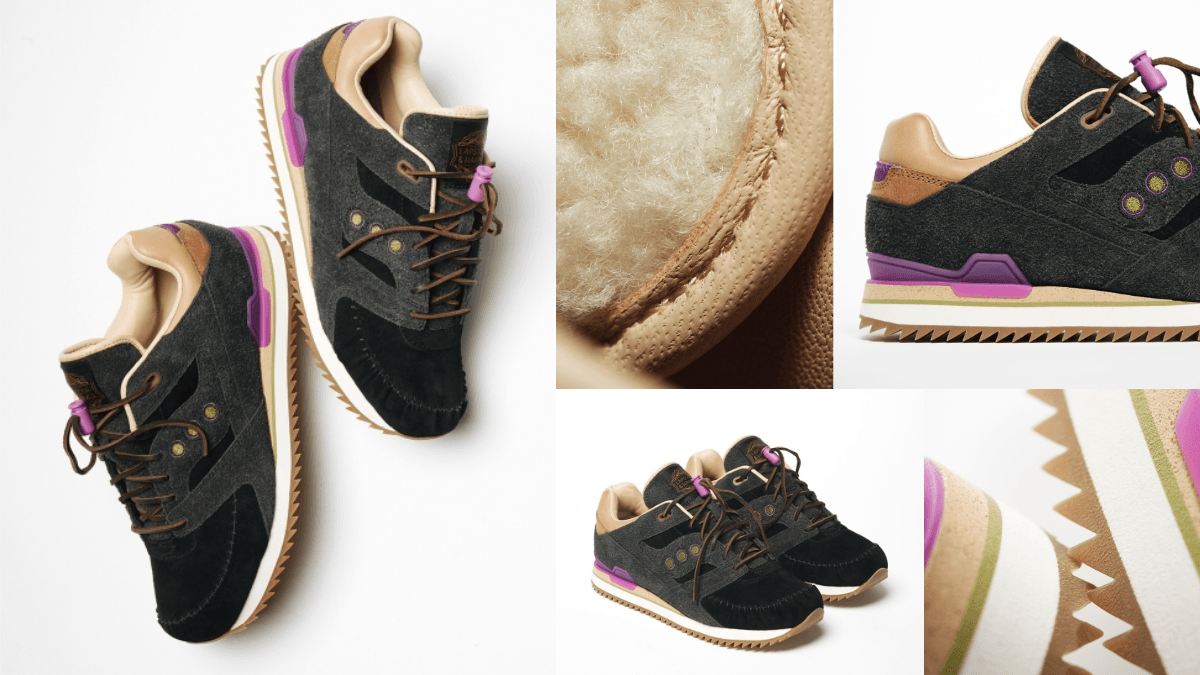 Boooom! New week - new sneaker releases! Among other things we can finally look forward to the EU-release of the Lapstone & Hammer x Saucony Courageous Moc 'Two Rivers'! Get ready for a crazy and unique fusion of two styles! Of course you'll get the release info from us right away. And for all those who want to know more about the two actors and their latest collaboration, we have prepared a little #TheCrew background check. Ready? Let's gooooo!

The brand new Lapstone & Hammer x Saucony Courageous Moc 'Two Rivers' celebrates its EU release at selected retailers on May 29, 2020 at midnight. For a good investment of €160 you will soon be able to own this beautiful pair of sneakers. Have a look at the list of retailers like 43einhalb who will release this cool hybrid on Friday. Just click on the button below:

Saucony. The brand with the wave-like "Saucony Wave" motif on the outside of their sneakers finds its origin as early as 1910! The founder of the brandis an Russina immigrant named Abraham Hyde. Almost a century later, the brand was bought by a large corporation and became even better known. Especially in Europe, Saucony quickly established itself as a well-known manufacturer of sporting goods. Today the brand has kept this status and is one of the most popular sportswear brands. By the way: As it could be hardly more fitting, the name of the American brand has it's roots in the language of the Native Americans and means "fast flowing river". ?

Lapstone & Hammer. The second collaborator of this new collab is a leading lifestyle brand from Philadelphia, USA. The brand focuses on contemporary menswear and premium sportswear. Here the focus is on craftsmanship, innovation and innovation in craftsmanship. As the name suggests, the branding of the brand consists of the lap stone and the hammer. Shoemakers traditionally use these tools to make shoes. In this way the lifestyle brand honors the art of shoe making.

As already mentioned, the two actors have come up with something very special here. Without further a do, they created a hybrid. What? Hybrid? This describes the "fusion" or the processing of different pairs of shoes into a single pair. In this case the popular courageous model by Saucony was combined with a simple moccasin. The two brands have implemented this composition very cool on a novel lifestyle silhouette.

But now let's really get down to the details of this gem:

Hold on tight, because true craftsmanship is being used here! Each overlay on the upper of the shoe is made of butter-soft silk and mammoth leather. Individual overlays in goat and Horween leather can also be found. Crazy materials provide here for an equally crazy good feeling in the shoe. But we are not finished with the variety of exclusive materials yet! The sneakers have an insole made of calfskin and a fleece lined tongue! Here you can also find the Lapstone & Hammer branding. There's more: A special shoelace duo provides the final touch to this power shoe. Look forward to rawhide and waxed cotton! But now let's take a look at the real special feature of these sneakers: The base here is actually a moccasin as we know it. The moccasin is actually sewn with a whip.

As I said, they were sworn to true craftsmanship. I don't think I promised you too much at all! If you, like Lapstone & Hammer, are into the old art of shoe making, this collaboration is a must have! All those who like to have something exclusive, do everything right with this unprecedented sneaker-hybrid by Saucony and should definitely hit the kicks on Friday!