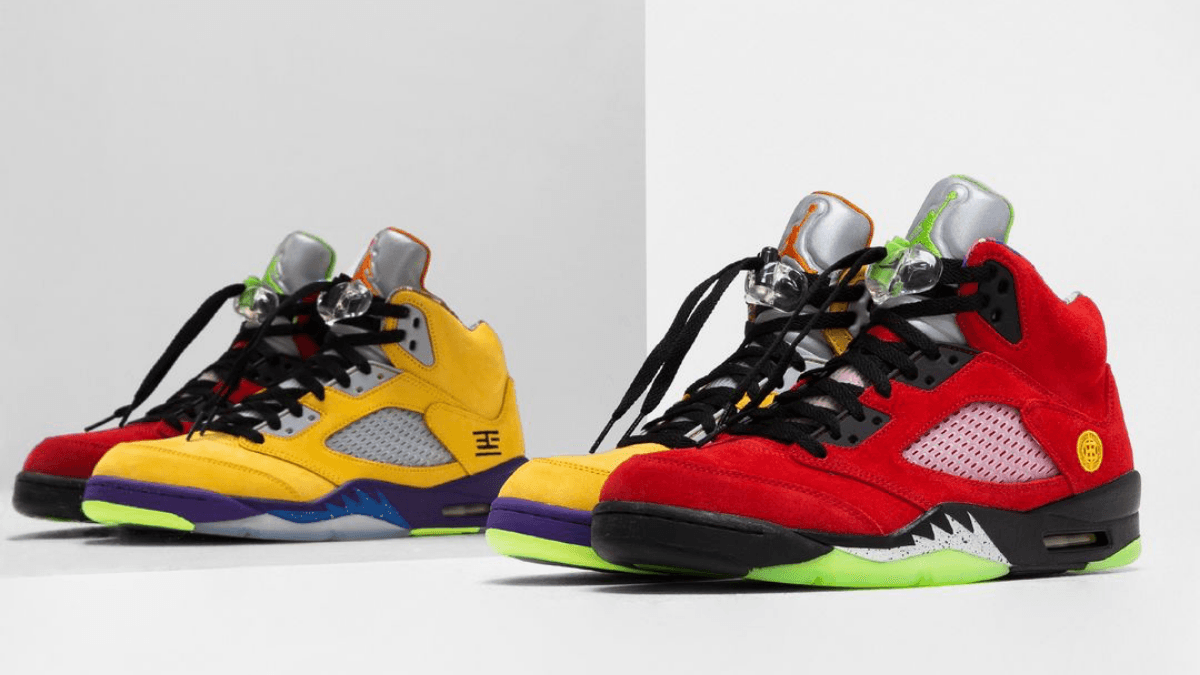 What's good community, with the Off-white collaborations and the 'Fire Red' Colorway on the Jordan 5, the legendary sneaker has had a strong 2020. It gets even better tho. Now the Air Jordan 5 Retro 'What The' is set to release. Before we get to all the details of the sneaker, here's the release info.

On Saturday 7th November 2020 at 9:00 a.m. the sneaker will release at Nike and other retailers. The Jordan will cost you 190€. Which retailers will sell the shoe as well? Check the button and find out. ⬇️⬇️⬇️

Air Jordan 5 Retro 'What The'

The story of the Jordan 5 begins 30 years ago in February 1990. Like many other Nike and Jordans from that time, this classic is a design by Tinker Hatfield. The shoe is Michael Jordan's fifth Signature, who by this time had already won his first Most Valuable Player Award. However was not yet NBA Champion. In the Jordan 5, Jordan had his best NBA season in terms of three pointers. However the sneaker is not only known because of MJ, but also because of the TV show The Fresh Prince of Bel Air. One of the cult series from the 1990s, in which Will Smith regularly wore the Jordan V.

The 'What The' Colorway

The 'What The' Colorway consists of the legendary OG Colorways of the last 30 years, which made it one of the most popular Jordan models. The Colorways featured on the What The Jordan V are the 'Tokyo,' the 'Raging Bull,' the 'Green Bean,' the 'Army Olive' and the 'Quai 54'. How exactly all these Colorways were all put into one model? Take a look at the photos and see it yourself.

The #thecrew's favourite details? The logos of the Jordan V 'Shanghai' and 'Tokyo' on the sides of the two Jordans. The right shoe is in yellow, in the Tokyo Colorway and that's why it has the Tokyo logo on it as well, plus some other cool designs. The left one is decorated with a red upper and the Shanghai logo, as well as some other nice little details. Now there are some very nice pictures of this amazing Jordan, followed by a short summary of the release.

If you have made it this far, then 👏. As a summary, the Air Jordan 5 Retro 'What The' released on November 7th, 2020, at all retailers , that you find by clicking the button.⬇️⬇️⬇️

Air Jordan 5 Retro 'What The'