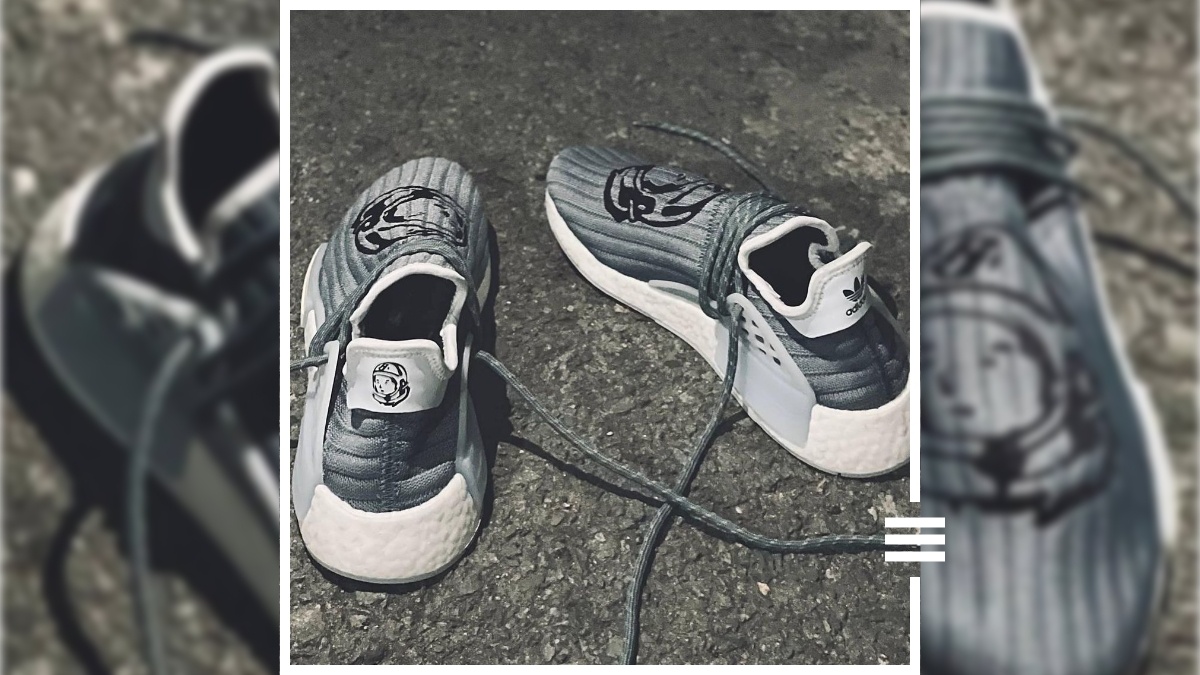 Hello dear sneakerjagers! It's been a long time since we've seen a collab on one of adidas' most popular sneaker silhouettes penned by none other than streetwear icon and multi-talent Pharrell Williams. But now this is set to change with the BBC x adidas PW NMD Hu that's dropping very soon. We can even look forward to a brand new collab with the internationally represented streetwear brand Billionaire Boys Club!

The special BBC x adidas PW NMD Hu will be released on Saturday, 09 October 2021 at 10:00 am. Check your finances now, because the much sought-after sneaker collaboration will cost you €220. Click on the button to see a list of all retailers and shops that will be selling the fresh pair. It's best to check back often, because there are sure to be a few more stores to come:

This is the Billionaire Boys Club

Those of you who have been in the sneaker & streetwear game for a while certainly know this brand by now. Because Billionaire Boys Club blew up shortly after its founding in 2005, and celebrities such as Lil' Wayne, Jay-Z and Kanye West have been seen wearing the brand's nice pieces more than once.

Back then, the brand was founded by US musician/designer Pharrell Williams and his good friend and concurrent Japanese streetwear icon Nigo. Nigo was also a well-known DJ at the time and is now also the founder of the world-renowned brand "A Bathing Ape" (BAPE).

The main focus in founding their fashion brand from the beginning was on the quality of the products, the uniqueness of the designs and an extremely limited production number of products.

In addition, Pharrell and Nigo have launched the Billionaire Boys Club with a message based on the two designer/music producers' mentality of life:

"True wealth is not in your pocket, but in your heart and intellect."

Now that you're familiar with the streetwear label Billionaire Boys Club, we can almost turn our attention to the brand's latest sneaker highlight. The BBC x adidas PW NMD Hu is just around the corner and you're probably already curious about the details of the kicks.

We won't keep you in suspense any longer and get straight to the point! The BBC x adidas PW NMD Hu delivers everything we know and have loved for years from the popular adidas Hu NMD by Pharrell Williams.

At first glance, the upcoming sneakers look simple and promise a simple colour blocking with the colours grey, white and black. You can't get more classy than that, can you? But let's really get into the details and take a closer look at these gems. Let's see what other lighting conditions make of them:

Et voilà, the kicks seem to come even more beautifully than expected!

Starting with the upper, Pharrell and adidas have opted for a premium knit fabric combined with straight heel-to-toe stitching in a greyish blue hue. Right on the toebox, Billionaire Boys Club has immortalised themselves on both sneakers with their "Astronaut Logo" print in black.

Of course, the striking lattice on the outside and inside of both shoes can't be missed. The brand delivers this in a light blue that almost looks translucent. The same shade can also be found on the rear brick design element and on the heel cap.

The heel caps also feature the logos of the two collaborating brands in black. The indispensable midsole with unbeatable Boost technology is here in white.

Two elements of the shoe stand out in particular because of the colours that don't actually harmonise: the beige brick on the outsole in the toe area and the petrol-coloured laces. We deliberately used the word "actually" here, because in our opinion the unusual colours don't really interfere with the clean design. What do you think?

The upcoming release of the BBC x adidas PW NMD Hu is unlikely to sell out immediately thanks to the hype of its big Oregon rival, which I'm sure is good news for most of you. But among adidas lovers, the adidas NMD line and especially such a collabo on Pharrell's most popular silhouette is certainly a must-have.

To maximise your chances at the release, keep an eye on the retailer and raffle list in our release calendar. If you also want to be easily reminded of the release so you don't miss it, we can only recommend the free Sneakerjagers app.

Unfortunately, that's it for all the important information on the release of the BBC x adidas PW NMD Hu. We hope we were able to give you some cool insights and keep your fingers crossed for the jewellery! 🍀