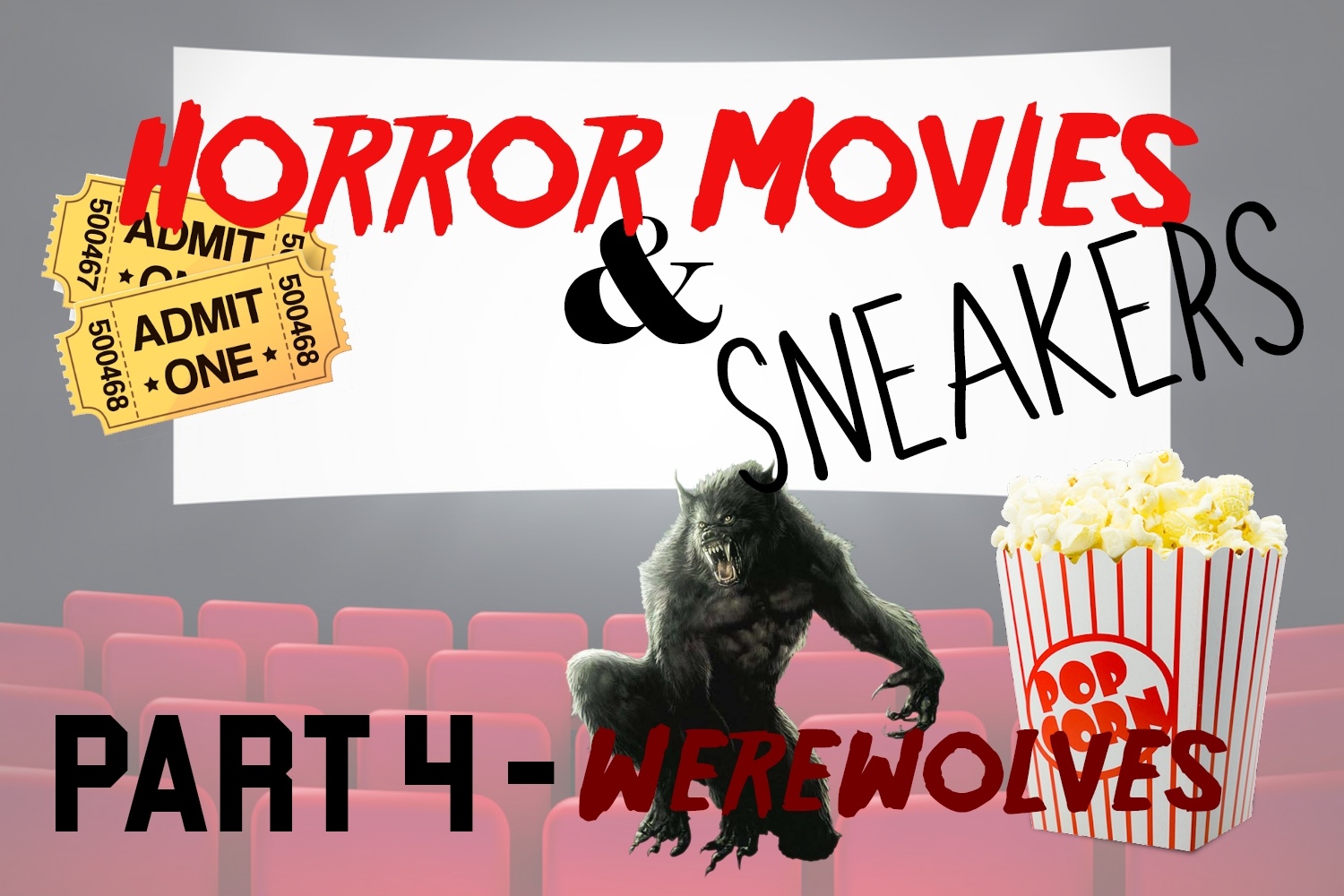 In the fourth and final part of our Halloween Movie Marathon, we're bringing you the top Werewolf Movies to binge over Halloween 2021! We've covered Ghosts, Zombies, and Aliens; now it's time to get furry and howl at the moon.

Whatever you decide to watch at Halloween and however you style your outfit, we wish you a very fun and spooky Holiday from the team at Sneakerjagers!

The Best Werewolf Movies for Halloween 2021

An American Werewolf in London (1981)

Quick summary: Two American students are attacked by a werewolf while on a walking tour of Britain, ending with one dead and one severely mauled. He begins to have horrible nightmares during his recovery, dreaming of hunting on four feet. Even more shockingly, his dead friend appears before him alongside other victims of the werewolf, demanding that he kill himself to release them from being trapped between worlds because of the unnatural nature of their deaths.

Why you should watch this film: It's unmissable just due to the incredible special effects, with one of the best transformation scenes ever created for a werewolf movie. You'll wince in sympathy as bones crack, skin tears and limbs bend the wrong way in an obviously excruciating change under the full moon. Smatters of dark humour here and there will invoke a few laughs, and overall it's a very enjoyable film.

Rock the look: Prepare for bad weather with a decent puffy jacket and all-terrain sneakers, but make sure you look 80s smart underneath in a clean white shirt and comfy jumper.

These Veja Venturi will keep you comfy on any hike, and lookg great matched with a long green coat, cute blue sweatshirt and all-purpose white shirt.

Pair some Nike ACG React sneakers with a burgundy jacket, navy sweatshirt and smart white shirt to survive the trek to the office.

A piece of spooky trivia for you:
All the songs in this film have the word "moon" in their titles.

Quick summary: A British Squad is sent on a training mission in the Highlands of Scotland against Special Operations squad. Finding the bloody remains of the Ops squad, and a howling starting up in the night, they make a frenzied dash for shelter, running into zoologist Megan who takes them to a cottage sitting in the middle of nowhere. Now they must make a stand against a pack of werewolves determined to hunt them down to the last man.

Why you should watch this film: Full of dark British humour at its finest, the soldiers' camaraderie is the best thing in this movie, with insults and jokes flung around even in the middle of being brutally killed. The looming werewolves are decently menacing, and the realistic costumes must be applauded. With plenty of witty banter, gruesome maulings and fun characters, this could well become one of your favourite films.

Rock the look: Combine your camping trip with some camo gear and you'll feel part of the forest.

This cute Comme Des Garcons T-shirt in camo print is the perfect addition to any outfit, but you can go a step further with a camo jacket, camo trousers and khaki converse sneakers!

A fleecy camo-print jacket will keep you toasty in the cooler evenings but this Puma t-shirt, shorts and Converse camo combo will be perfect for hiking in the warmer Autumn weather!

A piece of spooky trivia for you:
The piece that Megan plays on the piano halfway through the film is Debussy's "Clair de Lune", roughly translatable as "moonbeam".

Quick summary: TV Journalist Karen White is unsurprisingly traumatised after aiding the police in the capture of serial killer Eddie Quist, who's been stalking her through phone calls. Her doctor recommends she attend an isolated psychiatric retreat to heal, but it's not very relaxing when the creepy residents act strangely around her, and she uncovers a bizarre connection between Quist and the retreat. After venturing in to the forest one night, she makes a terrifying discovery.

Why you should watch this film: It's a solid 80s horror movie with a sinister plot, consistent overbearing menace and a satisfying and quite frankly enjoyable ending. The practical effects will blow you away! Watch the sequels if you dare, but nothing will ever beat the first film.

Rock the look: Keep it simple in a warm jacket, dark jeans and brown sneakers for a peaceful walk through the woods. You'll be safe in the daylight, promise.

Match a lightweight white jacket with a pair of washed out jeans and some sporty brown adidas sneakers for any stroll in the outdoors.

A chestnut brown jacket, dark blue denim jeans and a pair of Gore-Tex Nike Air Force 1 will sort you out no matter the weather.

A piece of spooky trivia for you:
Robert Picardo improvised the line "I want to give you a piece of my mind" before pulling out a bullet from his head.

Quick summary: 16-year-old Ginger starts her first period on the night of the full moon, which coincidentally is also the night she gets bitten by a strange creature in the park. Some serious changes start happening to her body and temperament, but is it just because of her impeding womanhood, or is something more sinister happening to her? Younger sister Brigitte is convinced it's the latter, and with the help of the local drug dealer Sam she races against the next full moon to find a cure for Ginger.

Why you should watch this film: It's a unique take on the usual werewolf trope, with the ties of sisterhood being tested under supernaturally hard circumstances. Both Ginger and Brigitte are played impeccably by Katherine Isabelle and Emily Perkins respectively, and the steadily-escalating chain of events leading up to the ending are a fun and gruesome thing to watch.

Rock the look: We start off with baggy, oversized black clothes but as the film goes on we see more colours and fitted clothing from the newly confident Ginger. But above all, dress true to yourself.

A piece of spooky trivia for you:
In some scenes, Brigitte wears shaggy coats that look as though they are made of fur; one heavy gray coat looks like wolf fur.

Quick summary: Teenager Rosaleen presently lives in a country house in England with her family, but at night her dreams take her to the Middle Ages and features the werewolves of her grandmother's stories. She recalls her Granny's advice - Never stray from the path in the woods. Never eat a windfall apple. Never trust a man whose eyebrows meet.

Why you should watch this film: I'll start straight away by saying this film is bizarre, creepy, and at times a bit confusing. But it's an absolute must-watch for a werewolf fan. All the self-contained stories are unique enough to stay interesting, and the different transformation scenes you're treated to are a joy to watch.

A piece of spooky trivia for you:
Due to budgetary constraints and fears about safety, most of the "wolves" in this movie are actually Belgian Shepherd Dogs whose fur has been dyed.

Quick summary: Lawrence Talbot was sent to an insane asylum by his father after his mother died, after which he fled to America. When his brother's fiancée comes looking for him to help her find her missing love, he returns to his father's estate to discover that his brother's mauled body has been found. Setting out to find the killer, someone with brute strength and an insatiable blood list that has been slaughtering the villagers, he discovers a horrifying destiny for himself. Meanwhile, suspicious Scotland Yard Inspector Aberline has come to investigate ...

Why you should watch this film: A remake of the original from 1941, the 2010 version doesn't anything especially new or exciting. But what it does do is deliver a solid story, gloomy setting and the skills of some fine actors including Benicio Del Toro, Hugo Weaving and Anthony Hopkins. The gothic atmosphere is well done, the effects are pretty incredible and overall it's a film that should be on anyone's werewolf movie list.

Rock the look: Keep a stiff upper lip in your best attire of shirts, waistcoats, fitted dresses and shiny shoes.

A pair of black Old Skool Vans with white stitching adds a tone of playfulness to this otherwise strict-looking Victorian outfit.

These black adidas Y3 sneakers look smart enough to get away with being worn under a suit, making sure you survive the day in comfort.

A piece of spooky trivia for you:
Inspector Francis Aberline was based on Frederick Abberline, a Scotland Yard Inspector that investigated London's Jack the Ripper murders in 1888.

What do you think about my top werewolf movie picks? Will you be watching any on Halloween? If you've missed the first 3 parts to the series, check out our sneaker news page to catch up!