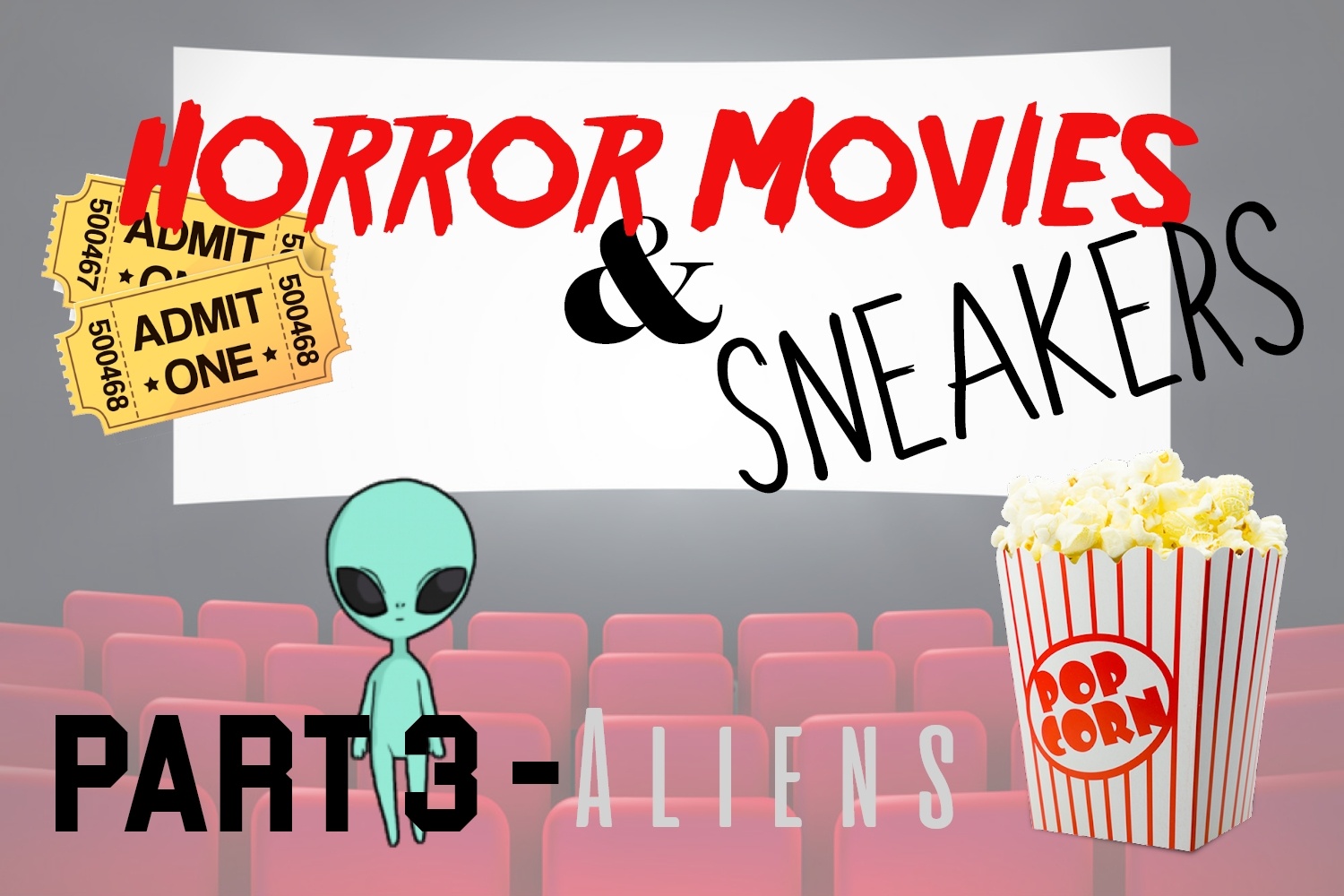 We've taken you through the best Ghost and Zombie movies, now it's time for part 3 of our Halloween Horror Movie marathon: The top Alien movies to watch over Halloween 2021!

The Best Alien Movies for Halloween 2021

Quick summary: On their way home to Earth, the crew of the spaceship Nostromo pick up a distress signal from a nearby moon. Under obligation to assist, they land and go out to explore. Around the same time they discover a nest of eggs from an unknown creature, the ship's computer deciphers the signal to be a warning, not a distress call. But it's too late; with one of the crew already facing the consequences of disturbing an egg, what follows is a epic struggle for survival.

Why you should watch this film: Whilst spawning three decent sequels, the original remains the best, and for good reason. The sense of suspense created while waiting for attacks from around dark corners, tight crawl-spaces and steam-filled corridors keeps you on the edge of your seat. Sigourney Weaver gives a fantastic performance as Ripley, and you'll be pleased to know - spoiler alert - the cat makes it.

Rock the look: Jumpsuits, jackets and cargo pants were apparently all the crew needed to fight off the alien. It didn't work out so well for them, but it certainly can for you!

A jumpsuit might be a bit much, but mix a playsuit with some Vans boots and a cropped jacket and done!

Combine white cargo pants with a green jacket and dark Yeezy desert boots for a casual but up-for-anything look.

A piece of spooky trivia for you:
Real animal guts were used for the chestburster scene, but the actors weren't told - their shocked and horrified reactions are genuine.

Quick summary: A special force ops team led by Major "Dutch" Schaefer go on a rescue mission for potential survivors of a downed helicopter in a remote South American jungle. They soon find out they've been sent out under false pretenses, but more important than the deception is the fact that they find themselvess being hunted by a out-of-this-world predator.

Why you should watch this film: It's just a joy to watch from start to finish, with a great cast, fun dialogue with endlessly quotable one-liners, and Arnold Schwarzenegger at his finest. There's some great scenes for gore fans, and although the CGI didn't age well the alien's reveal in the finale still looks great and is suitably horrifying.

Rock the look: Camo print is a popular colorway on any piece of clothing, and here's some of our best picks of camo print sneakers:

A piece of spooky trivia for you:
The Predator's blood was made on-set using a mixture of the liquid from inside glow sticks and KY Jelly.

Quick summary: Aliens from outer space invade a small town and begin killing the townsfolk, but no one takes them seriously - because they look like clowns, have ridiculous looking weapons, and their spaceship is a giant circus tent. Only a few young people realise the danger they're in and they try to rescue everyone else.

Why you should watch this film: It's HILARIOUS. The overacting. The klowns. The weapons. You'll find yourself watching to the end in horrified fascination. And if you're not a fan of clowns to begin with, then these aliens will probably pop up in your nightmares for the rest of your life.

Rock the look: Get creative with clashing colours. Everything's allowed. Dye your hair, bring out your brightest make-up, and scare the normals!

With Nike By You, why not customise your own Nike sneakers to go with your outfit? You can go crazy and try to squeeze in as many colours as possible!

A piece of spooky trivia for you:
The clowns and visual effects were created almost entirely by the filmmakers at very little cost. Though not a hit on release, the film has since become a cult classic.

Quick summary: Ray Ferrier, a divorced dockworker living in New Jersey, is looking after his children one weekend when the first wave of an alien invasion begins on Earth. Silver spaceships begin to erupt from underneath their feet, killing everyone nearby and forcing Ray to try and find safety with his children in a desperate chase.

Why you should watch this film: Honestly, the film is a bit clunky in places, and although it's a remake of the 1953 original, it doesn't quite do it justice. BUT. Although the aliens themselves are scary and relentless, and the soundtrack haunting, it's the human aspect of the movie that's really remarkable. Sometimes, it's what people are driven to do in order to survive that's to be feared more than an alien invasion.

Rock the look: Layer up for Autumn like Rachel, so you're always prepared. Too hot? Take off a jacket. Too cold? Add a scarf and gloves. But always look awesome.

A piece of spooky trivia for you:
The tripod design for the alien machines, including the heat rays at the ends of arms, is based on H.G. Wells' original description from his book. The "red weed" is also from the novel.

Quick summary: Space vessel 'Hunter-Gratzner' crashes on a desert planet when it's caught in a meteor storm. The 11 survivors, one of whom is 'Riddick', a dangerous convict, must worry about finding food and water in the planet's harsh landscape. Not only that, but they soon find themselves being hunted by the alien inhabitants of the planet that only come out after dark. Night only falls every 22 years, but lucky them, they crash-landed just before the cycle. Now they must navigate to an escape shuttle before the night is over and they all get eaten.

Why you should watch this film: Vin Diesel's breakthrough role as Riddick is a great cast, and he's supported by a well-rounded group of characters that get you loving them and hating them in equal turns. The sense of futility as the sun goes down and options begin to run out keeps you emotionally invested, and the aliens are deadly scary. You might keep the light on in bed tonight.

A piece of spooky trivia for you:
Vin Diesel actually performed the shoulder-dislocation stunt for the crew, holding a chain between his hands. The version we see is mostly him with some special effects thrown in.

Quick summary: At a US research station in Antarctica, the base is suddenly contacted by a helicopter from another nearby research station that are chasing and trying to kill a dog that escaped from them. After the destruction of the chopper, the US team head to the other base to find out what happened, only to find everyone dead or missing. They discover the remains of a strange, burnt creature, and bring it back to deduce it's an alien lifeform. Soon it's discovered that it can take over and assimilate other life forms, and spreads like a virus. Now knowing that anyone at the base could now actually be the alien, tensions arise.

Why you should watch this film: Even at almost 30 years old, the special effects are just fantastic, gory and gooey and disgusting enough for even the strongest of stomachs. The best part of the film, however, is the tension revolving around the fact that no one in the team can truly tell if everyone's who they appear to be. It offers a great glimpse into human psychology when isolated, afraid, and unable to trust your friends.

Rock the look: Wrap up for Winter (or a trip to an Antarctic research station) with fleecy coats, long-sleeved tops, thick jeans and cosy sneakers. It's not just sensible - it's super trendy too.

These Sherpa Air Force 1s are designed to keep your feet warm, and paired with a hooded jacket and boyfriend jeans can't go wrong!

A fleecy jacket, simple jeans and these Nubikk Fur sneakers keep you trendy and warm in the snowy weather!

A piece of spooky trivia for you:
Real animal organs were used in the autopsy scene, making everyone in the crew but Wilford Brimley squeamish.

What do you think about my top alien movie picks? Are any of your favourites in there? Stay tuned to our sneaker news page for the next and last part of the series!