How your favourite sneakers became popular 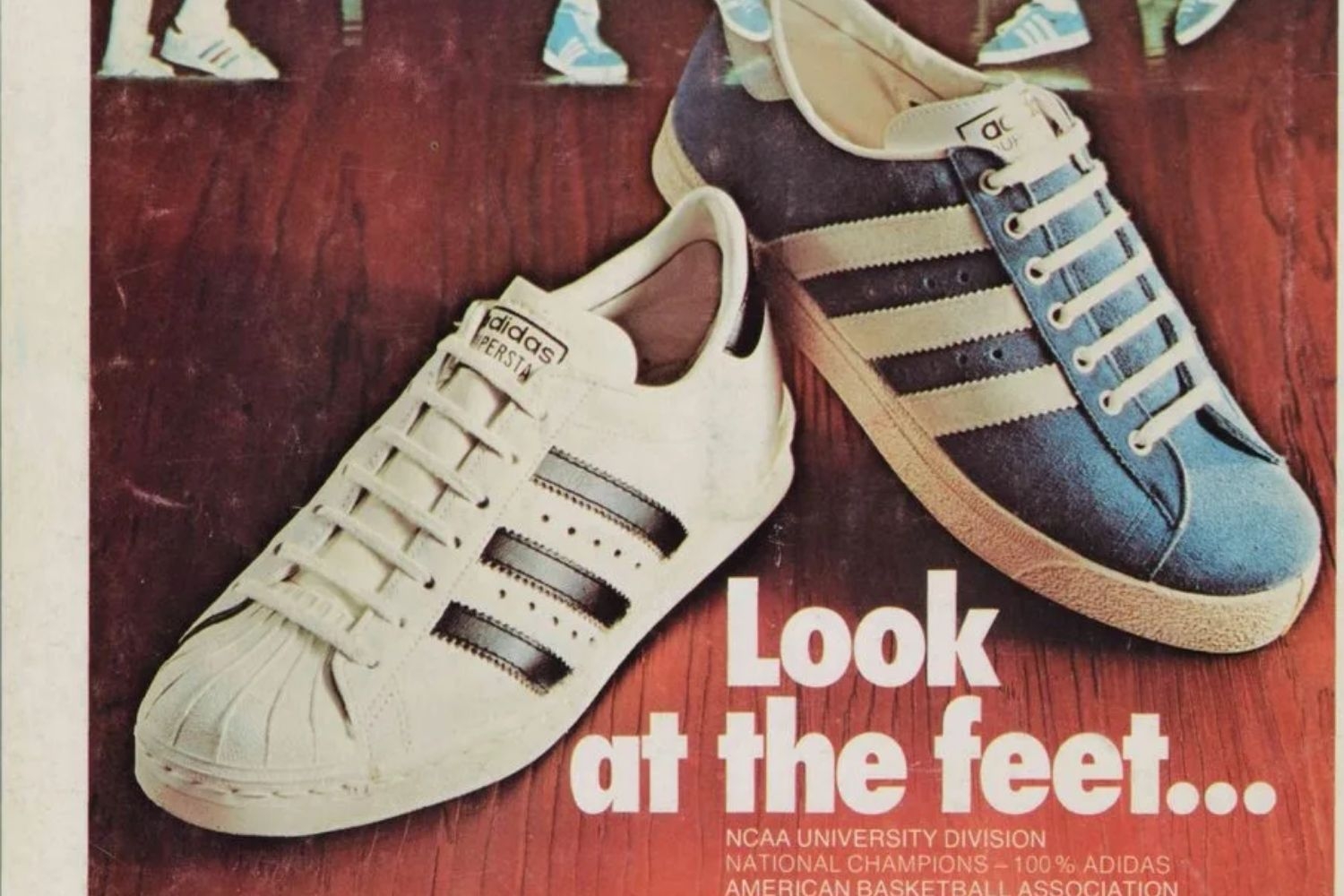 From the New Balance 990 to the Air Jordan 1, the trainer world has a lot of iconic models. But how did these shoes become so popular? And how do we know these models by name? For these questions, we jump back in time and look at how these trainers became so famous.

In 1985, the very first Air Jordan 1 appeared in a Bred colorway. The sneaker was designed by Peter Moore especially for NBA basketball player Michael Jordan. A fun fact to know about the collaboration between Nike and MJ is that the basketball player did not actually want to be a partner of the Swoosh brand.

Michael told us that he did not like the Nike sneakers at all. He admitted that, among other things, the Nike soles were too thick. Because of this, he could not feel the basketball court underneath him, which was quite important to Michael.

Banned from the NBA

Michael took the kicks to the basketball courts and wore the pair to a number of games. Soon the shoe attracted a lot of attention because of the striking combination of red and black. However, it was not long before Michael and Nike received a letter. This letter stated that the Air Jordan 1 'Bred' was banned from the NBA because the shoe was not in line with the dress code.

Yet it was the Nike Air Ship that was banned from the NBA, not the Air Jordan 1. Michael wore this pair in 1984 during a game against the Knicks and had the same black and red colorway as the AJ1. Nike played on this in many ways to make it look like the Air Jordan 1 was banned.

"On October 15, Nike created a revolutionary new basketball shoe." The AJ1 was introduced in a campaign video for the shoe. In the video, basketball player Michael Jordan can be seen wearing the kicks, with the famous quote at the end "On October 18th, the NBA threw them out the game. Fortunately, the NBA can't stop you from wearing them."

After the video was published, the shoe became extremely popular. The campaign video rocked the world and the sneaker sold out immediately after the first drop. Nike then dropped thirteen other colorways, including the 'Chicago' and 'Carolina Blue'.

These colorways became the basis that caused the growth of the iconic model. Besides that, the sneaker also brought a lot of influence in different subcultures. In the meantime, the Air Jordan 1 has been released in different colorways and collaborations and it is impossible to imagine the sneaker world without it.

Next to the Air Jordan 1, the adidas Superstar also launched as a basketball shoe. This model took its inspiration from the 1965 adidas Supergrip and had to travel a long way before it was able to conquer a place in the sneaker world.

In 1969, the basketball world was taken over by the Converse Chuck Taylor All Stars. The shoe was a popular model with several basketball players and was spotted at various basketball games. However, Chris Severn, an adidas consultant at the time, noticed that there was not much development in the sneaker market for basketball.

Chris saw this as an opportunity and started to work with the design team of adidas. Because of the fast movements of the basketball players, their ankles and knees started to hurt. As an answer to this problem, Chris designed a basketball shoe with an upper made of leather instead of canvas (like Converse). He also added the famous 'Shell Toe' to the design with rough lines to the outsoles. This made the shoes not only sturdier, but also gave the kicks more grip.

Then it was the turn of the big job: getting customers. The consultant visited various gyms to approach sports athletes. Then Chris convinced the manager of the San Diego Rockets, Jack McMahon, to let some of his basketball players wear the Superstars. This was because the players were suffering from injuries that the shoe was specifically made for.

In 1967, adidas signed basketball player Kareem Abdul-Jabbar as an official partner of the brand. Since then, the model grew and the shoe was spotted more and more often on the basketball courts by several players from different teams.

It wasn't long before the kicks became lifestyle sneakers. The brand started releasing suede versions of the Superstar in the 1980s, as well as the famous 3-striped Tracksuits. This was also the period when hip-hop group Run-DMC was very popular. The group was often spotted in a fully adidas outfit with the Superstars on their feet.

The group was seen by many as style icons and so the brand was indispensable to fans as well. In 1986, Run-DMC released the song 'My Adidas' and paid tribute to the Superstar sneakers. With the song, they also tried to change the misconceived perception of 'b-boys' and 'b-girls'.

Run-DMC made the brand, especially the adidas Superstar, very popular. Angelo Anastasio, the representative of adidas at that time, also experienced this peak in a special way.

For example, Angelo attended a concert of the hip-hop group at Madison Square Garden. During this concert, Run-DMC shouted: "Everybody here. If you got adidas on, hold 'em up!" So some 40,000 people in a sold-out concert hall held up an adidas sneaker.

New Balance also has a lot of sneakers, and 2020 in particular was a good year for the brand. Among other things, because of the 990 line. In this year, a lot of variants were added. Also, the 992 model made a comeback, as did the 1300. But what makes the 990 line so special?

In 1982, New Balance launched the 990 model and was known as a running shoe. At the time, the shoe was released as one of the most expensive shoes on the market and therefore attracted a lot of attention. In addition, the model was built from different technologies. This ensured that the shoe was not only stable, but also cushioned and flexible. These functionalities later became the core values of the running shoes of New Balance.

In 1998, New Balance adapted the model and came up with an updated version: the 990v2. The sneaker kept its technical structure, but was introduced with new an ABZORB midsole and a DuPont™ Engage® technology.

After the v2, several other versions of the model followed. They did this through a strategy that kept people waiting for more. "Unlike a lot of shoes, we have decided to change the 990 every few years whenever we have the feeling that it's getting saturated and people are looking for new things," Scott Hull, designer of the 990v4 and v5 told Sneakers Mag during a 2019 interview. "When we see that this happens, we want to energize the marketplace with an updated design."

New Balance released three more versions of the 990 model. It also seems that the sixth variant is already on its way. Creative director of New Balance, Teddy Santis, shared the first images of the 990v6 on Instagram. This sneaker will most likely be released in 2022.

But it didn't stop at the 990. In 1985, the 995 appeared and models such as the 996, 997, 998 and 999 continued New Balance's collection. In addition, the shoes of the brand were also characterised by its grey colour scheme. Thus, New Balance released several pairs in a 'grey' colorway and the kicks soon became popular among the public.

Steve Jobs, founder of Apple, was also a big fan of the grey New Balance sneaker. There are rumours that Steve even participated in the design of the 992 model in 2006.

In 2020, the 992 model returned and soon became very popular. This was mainly because the brand knew there was a demand for the sneaker. "There was definitely a bit of pent-up desire around the shoe," says Brad Lacey, senior global design director. "Also, people look for things they can trust in times of instability."

According to the brand, the 990 line is one of the most famous sneaker franchises in performance running shoes. The return of the 992 model turned out to be a great success as New Balance capitalised on the desires and trust people had in the brand. "People know what they're going to get out of it from a quality standpoint, a looks standpoint," says Brad.

So that's how some of our favourite sneakers became popular. The Air Jordan 1, adidas Superstar and the 990 line from New Balance all have a rich history and belong to some of the most classic models of the sneaker world. In addition, these kicks are far from being outdated and we can expect a lot of new variants in the future.