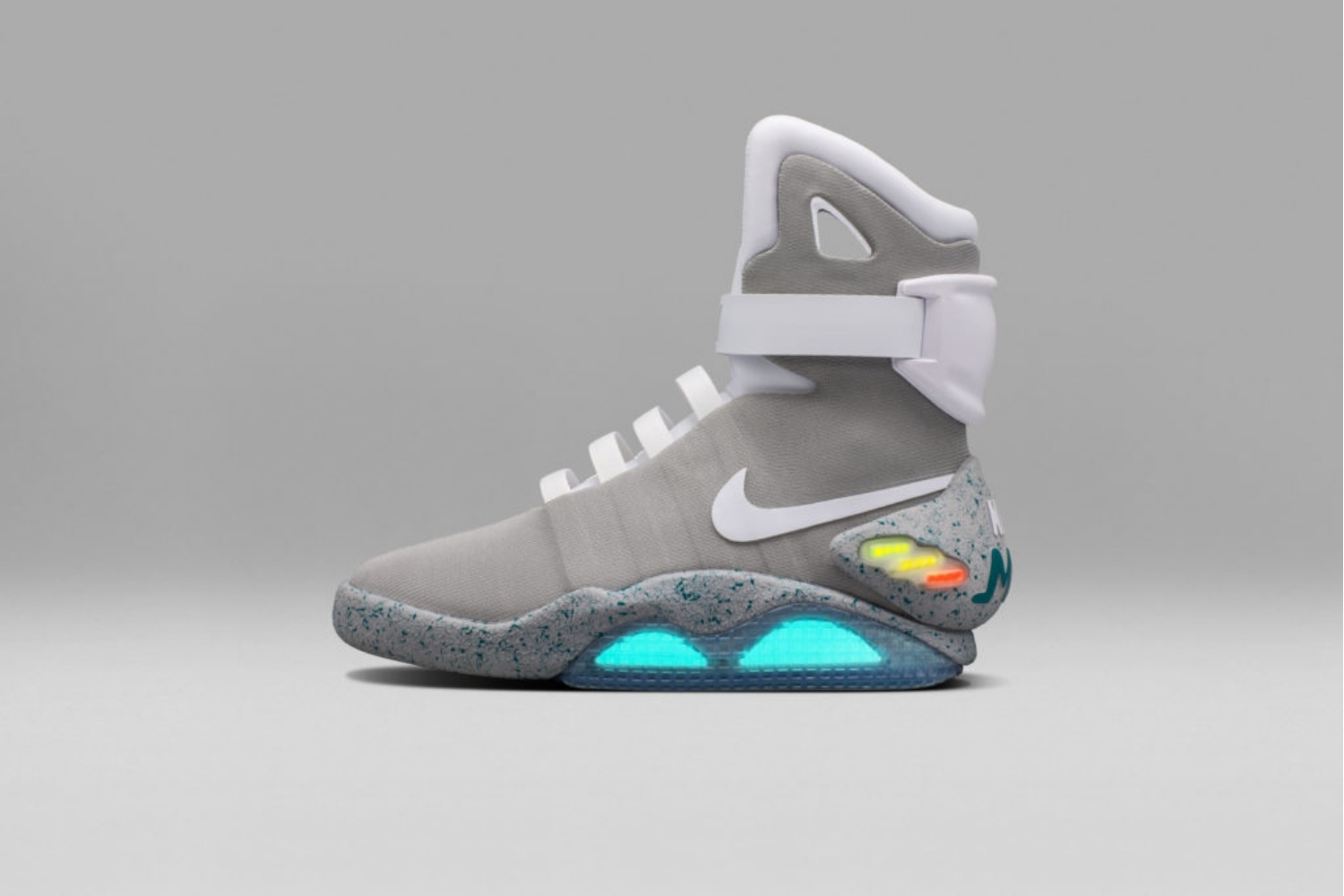 Incredibly expensive, super limited and full of innovative technology. The Nike Air Mag continues to attract incredible attention today, ever since its first appearance in the second part of the 'Back to the Future' film trilogy in 1989.

The sneaker community's desire for this futuristic shoe was so great that shoe design legend Tinker Hatfield released a real, purchasable version of the film shoe on 8 September 2011. The seamless finish, the grey dotted sole with glowing blue accents and the automatic closure of the shoes made this sneaker a unique piece that stands out from any other sneaker.

Background Story about Back to the Future

In the Back to the Future franchise, teenager Marty McFly travels through time with his older friend, Emmett L. "Doc" Brown. In the second part, the two fly to the year 2015 with their time machine and Marty receives the Mag Sneaker so that he can adapt to the clothing style of the future. Above, you can see how Marty exchanges his Nike Bruins for the Mags.

The four white laces on the model contract as soon as Marty puts his foot in the shoe and the LEDs on the side and sole light up in different colours, representing the idea of a sneaker of the future.

The first version, released in 2011, was an exact replica of the film shoes. The only difference was that Nike had not yet solved the problem with the motor of the "power laces". Thus, this shoe appeared without the futuristic feature of self-lacing.

Very untypical was the sales platform Nike chose to get this sneaker among the people. You couldn't buy the shoe officially at Nike or win it through Raffles, and no other sneaker shops had this shoe in their assortment either. The only chance to get a pair was by outbidding other interested parties at an Ebay auction.

The reason for this sales channel had something to do with the film or, more precisely, with one of the actors in the famous film. Micheal J. Fox, who played Marty McFly, was diagnosed with Parkinson's disease in 1991 and the disease made the life of the film star more difficult.

Nike donated all net profits from the sale of the 1500 copies to the Michael J. Fox Foundation for Parkinson's Research (MJFF) with the purpose of finding a solution for this still incurable disease.

Because three target groups were addressed at the same time, the Parkinson's community, sneakerheads and Back to the Future fans, a real battle broke out for the shoes and the price skyrocketed at the auction. Some buyers paid $9,959 for a pair of Nike Mag.

At the end of the 10 auction days, a sum of $4.7million was raised, which was donated directly. If you had bought the sneakers for just under €10,000 at that time, it would have been a very good investment in 2021 from today's perspective.

Sneakerheads who want to call themselves owners of this sneaker today sometimes have to pay three times as much for certain sizes at StockX.

Almost 5 years after the first release of the Nike Mag, Nike finally found a solution for the function of the "power laces". On 4 October 2016, a new Nike Air Mag with the revolutionary lacing system was released, as seen from the film. The sneaker, limited to 89 pieces, was raffled off this time. With a donation of $10 to the Michael J. Fox Foundation, you got a ticket and you could buy as many as you liked.

The extremely limited number and the innovative technology made the sneaker incredibly desirable. The auction for the first release gave a rough estimate of what the kicks were worth, or rather what buyers were willing to pay, but for this release, no one knew exactly what the Mag would fetch in the resell.

Less than 2 months after the release, a pair of the self-lacing sneakers was auctioned in New York for €200,000. Another pair was bought in Shanghai for just over €100,000. These prices clearly illustrate how extremely limited and exclusive these shoes were.