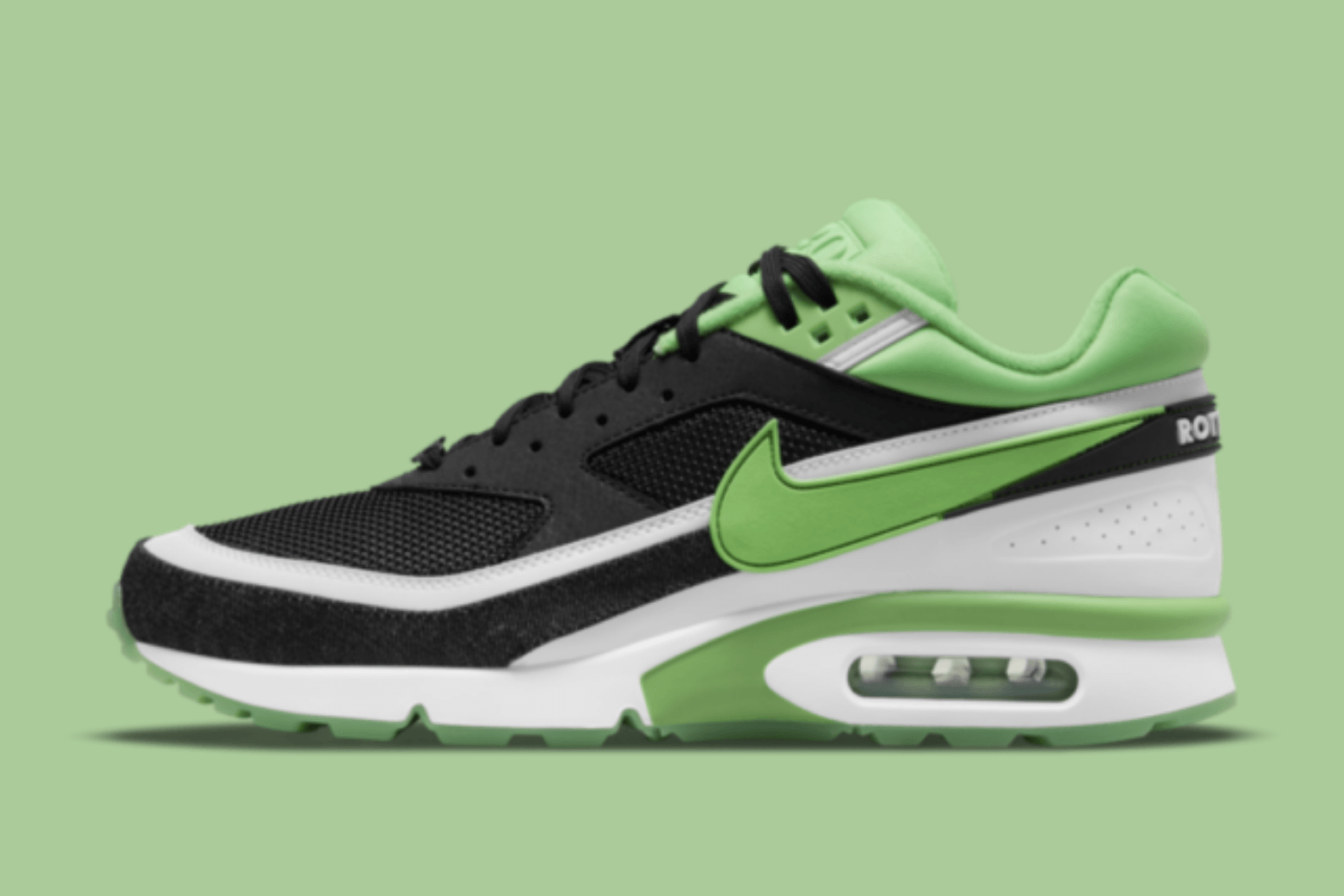 The Nike Air Max BW 'Rotterdam' is dropping soon. The pair will be available exclusively at WOEI and on the SNKRS app. The pair is part of the Nike 'City Pack' and will be released on 12 November 2021.

The Air Max BW is an iconic sneaker. The pair was designed by Tinker Hatfield and first released in 1991. The BW was released one year after the Air Max 90 and shares the same Nike Air Sole Unit. However, the window of the Air Unit was made bigger. This gave the model the name "Bigger Window", or: BW.

The original BW was released in the 'Persian Colorway' and it was also re-released in 2021. In addition, Nike announced the 'City Pack' in 2021. Hereby four different cities got their own sneaker. The pairs from this pack are the 'Lyon', 'Beijing' and 'Los Angeles'. The Netherlands is also getting its own pair and a bright green 'Rotterdam' is coming soon.

That the city of Rotterdam gets its own BW is not without reason. The city is known for its gabber culture and the sneakers were very popular with the gabbers who partied all night long. With its Air Unit, the pair was a comfortable sneaker that was perfect for stomping around long nights. The term 'gabber' was therefore quickly used when talking about the BWs.

The BW celebrates its 30th Anniversary in 2021. The 'City Pack' pays tribute to the pair, and the 'Rotterdam' in particular is a key pair in this pack. The bright green colorway takes its inspiration from the colours of Rotterdam. On the design, various hints to the city can be found.

The most striking detail is the 'Rotterdam' printed on the heel. The bright green colour contrasts nicely with the black upper of the design. The upper consists of mesh and the mudguard is made of black denim fabric. The swoosh on the middle panel is poison green and the tongue has also been given this colour.

Another striking detail of the 'Rotterdam', is the '220 BPM' printed on the tongue. This refers to 220 Beats Per Minute, which is characteristic for hardcore music. The sneaker also gives a nod to the gabber culture. The Nike logo can be seen on the insole, as well as the 'City Pack' logo.

On 2 November 2021, WOEI shared the release date of the 'Rotterdam' on Instagram. Sneaker store WOEI was founded in 2007 by Woei Tjin. Besides sneakers, WOEI also sells streetwear items and has its own clothing line. In recent years, the shop has collaborated with brands such as Nike, Asics and Stüssy.

Woei Tjin himself was mainly big in the skate scene in Rotterdam, but saw how big an influence the gabbers had on the BW. "When we were skating, especially at night, a group of gabbers would come by and go to the Energiehal and they would all be wearing BWs", Woei tells us. According to him, the BWs would never have been such a big sneaker if it weren't for the gabbers.

WOEI is the only sneaker shop where the 'Rotterdam' will be available. The sneaker will be sold at the new location and will be released on 12 November 2021.

The BW will also be released on the SNKRS app. Nike has also created a three-part series telling the story of the model.