Unleash your creativity with the Nike Air Force 1 By You 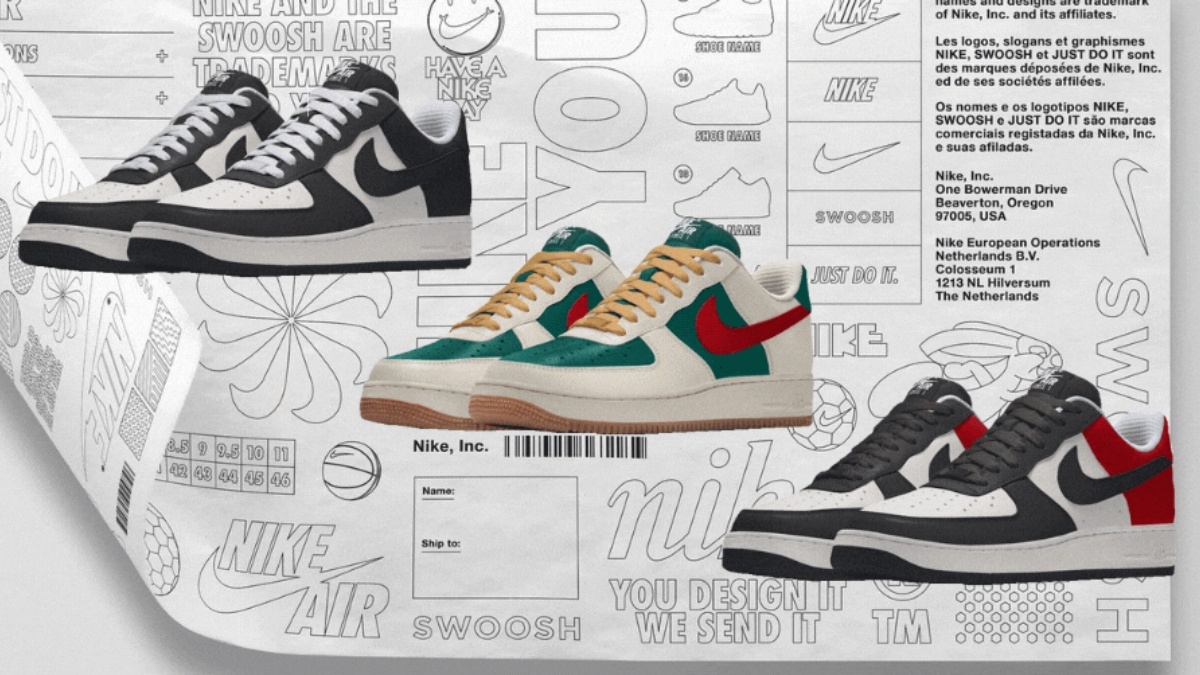 The Nike Air Force 1 Low is available in the By You programme from Nike. With this programme you can give many different models your own colorway.

Nike Air Force 1 By You

In the By You programme from Nike, you can customise the colours of different silhouettes. You can customize every element and overlay to your taste. This also means that you can put colorways of existing Jordan 1s and Dunk's on the Air Force 1. In the program, you can let your creativity loose.

To give you some inspiration, we at Sneakerjagers have created seven different colorways inspired by other sneakers. Check out these Air Force 1's below. Would you rather create your own colorway? Then click the button below.

nike air force 1 by you

With the colours available, you can give your Air Force 1 a Gucci theme. This is done by changing the toebox, centre, tongue and heeltab to the green 'Rainforest' colour. The Swoosh and branding on the heel tab can be changed to University Red.

To get the light colour on the upper, change the toe cap, lacing eyelets, sole rim, lining and midsole to 'Sail'. The outsole is made of gum rubber. The laces are in the colour 'Honeycomb'.

To create this colorway, change the toebox, tongue, side, lining and laces to black. The toe cap, lace eyelets, sole rim, heeltab and Swoosh are given the 'Smoke Grey' colour. The midsole is white and the outsole is black.

Nike's 'Panda' colorway is often found on sneakers. We have seen the Air Jordan 1 High 'Panda' and the Nike Dunk Low and High in the same colour scheme. With By You, you can also give the Air Force 1 this colour scheme.

To create your own Nike Air Force 1 'Panda', first make the toebox, laces, lining and side white. The nose, laces, tongue, heeltab, sole border and Swoosh are black. Now you have finished the upper. For the sole, make the midsole white and the outsole black.

In 2020 the Air Jordan 1 Mid 'Chicago Black Toe' came out with a colorway very similar to the one pictured below. Do you like this colour scheme?

The toebox, hip tab, Swoosh, lining and laces are black. Change the nose, tongue and sole border to 'University Red'. The lace eyelets and sides are white. As with the 'Panda', the midsole is made white and the outsole black.

The Jordan 1 OG 'Chicago' is the first Jordan 1 High that existed and was a tribute to the Chicago Bulls. Michael Jordan played there in 1985. This colorway is only available if you have a lot of money to spend. To save money, you can recreate this colorway on the Air Force 1 via By You.

To get the Nike Air Force 'Chicago' as below, make the toebox, midsole and side white. Change the nose, eyelets, tongue, outsole and heeltab to 'University Red'. The lining, laces and Swoosh are black.

In the summer of 2019, we saw the 'Black Toe' colorway on the Air Jordan 1 'Satin Black Toe' for the last time. Of course, this model was sold out in no time. Do you want to change the 'L' into a 'W'? Follow the instructions below.

To create your own Nike Air Force 1 'Black Toe', start with the toebox, the side and the midsole. Make these white. The toe cap, laces, Swoosh and outsole are in black. The heel tab and sole rim are the 'University Red' colour.

The 'Game Royal' colorway is very popular and we saw it on the Nike Dunk High. The Air Force 1 below is not quite the same, but it comes close.

To give the Nike Air Force 1 By You a 'Game Royal' colorway, change the nose, tongue, laces, sole border and heeltab to the 'Game Royal' colour. The Swoosh, laces, lining and outsole are black. The toe box, side and midsole are white.

Do you want to be informed about the latest sneaker news more often? Follow us on Instagram and keep an eye on our blogs regularly.