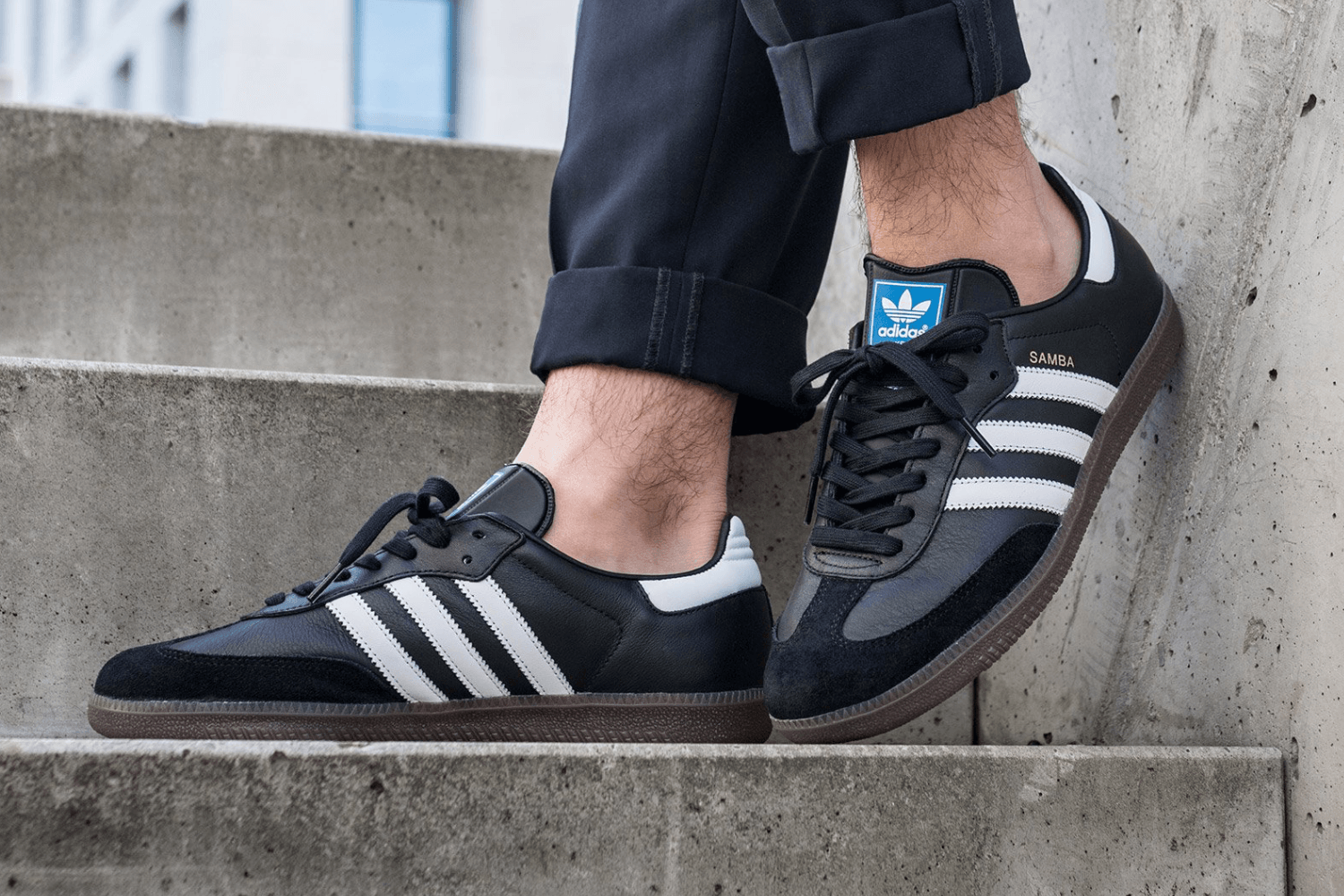 Today we'll answer your questions about one of the most iconic adidas sneakers, dear community: the adidas Samba. The story of the adidas Samba begins on an icy football field more than 70 years ago. A look back:

The history of the adidas Samba

The Samba is one of the Three Stripes Brand's best-selling shoes. In fact, the Samba is in second place overall, just behind the adidas Stan Smith. But the Samba is not only one of adidas' best-selling models, it is also a sneaker with a rich history.

1949: The model was designed as early as 1949 by none other than adidas founder Adi Dassler. Birthplace of the kick: The Adi Dassler adidas sports shoe factory, which was only entered in the commercial register in the same year.

Since then, they have been working on various sports articles. Among them are shoes that support athletes and make them even better. The adidas Samba is part of this mission. This also makes it one of the longest-produced adidas sports shoes today.

The Samba was originally developed for footballers, or more precisely for playing football on icy surfaces. The idea was to be able to play optimally with the Samba on hard and extra-slippery surfaces. And how? With the rubber sole, which offers perfect grip.

In keeping with the mission, Adi Dassler's sports shoe factory had taken on a problem in the sports world and found a suitable solution.

Want to know the whole history behind the adidas Samba? You can find the exciting story here:

You might be asking yourself: What does the adidas Samba actually have to do with Samba? Let's clear that up in our first question:

Why is the adidas Samba called 'Samba'?

The name of the adidas Samba comes from the fact that one year after the shoe was released, the 1950 Soccer World Cup was coming up in Brazil. Brazil: a country very well known for samba and carnival. That's where adidas wanted to present their shoe. Shortly before the tournament, they decided on the name 'adidas Samba'.

Is the adidas Samba made of leather?

The adidas Samba is available in a leather upper or vegan leather. In the vegan version, the sneaker is made of synthetic leather and thus does without any parts of animal origin.

Are adidas Samba on trend?

adidas Samba have been back in style since 2022. Bella Hadid, Kendall Jenner, Kaia Gerber and Hailey Bieber have all been seen wearing the sneaker recently. Style icons of the nineties like Kate Moss and Winona Ryder also wear the Samba. A retro design that is currently enjoying enormous popularity again.

The adidas Samba is not directly an indoor shoe today, but can of course also be worn indoors. The mostly light-coloured gum outsole leaves no welts. With its extra-textured rubber sole, the Kick was intended more as a shoe for icy surfaces. After serving well as such, however, the Samba also established itself as an indoor shoe, skate and street style icon.

How does the adidas Samba fit?

The adidas Samba has a normal, true-to-size fit. However, the rather narrow fit should be considered for wide feet.

One of the trend sneakers of 2022 is the adidas Samba. The sneaker has been back in fashion since the beginning of the year and is worn by many stars. The sneaker is often combined with high socks in the summer, with baggy pants or also with business chic style.

Keep an eye on our sneaker news for more styling tips on the Samba and other trendy sneakers.

Available at marketplaces
View all retailers
€60

If you've become a fan of this special shoe from the adidas brand, click on the button below. There you can find all the Samba colorways with their prices, sizes and shops via our sneaker search engine, or you can shop directly at adidas.