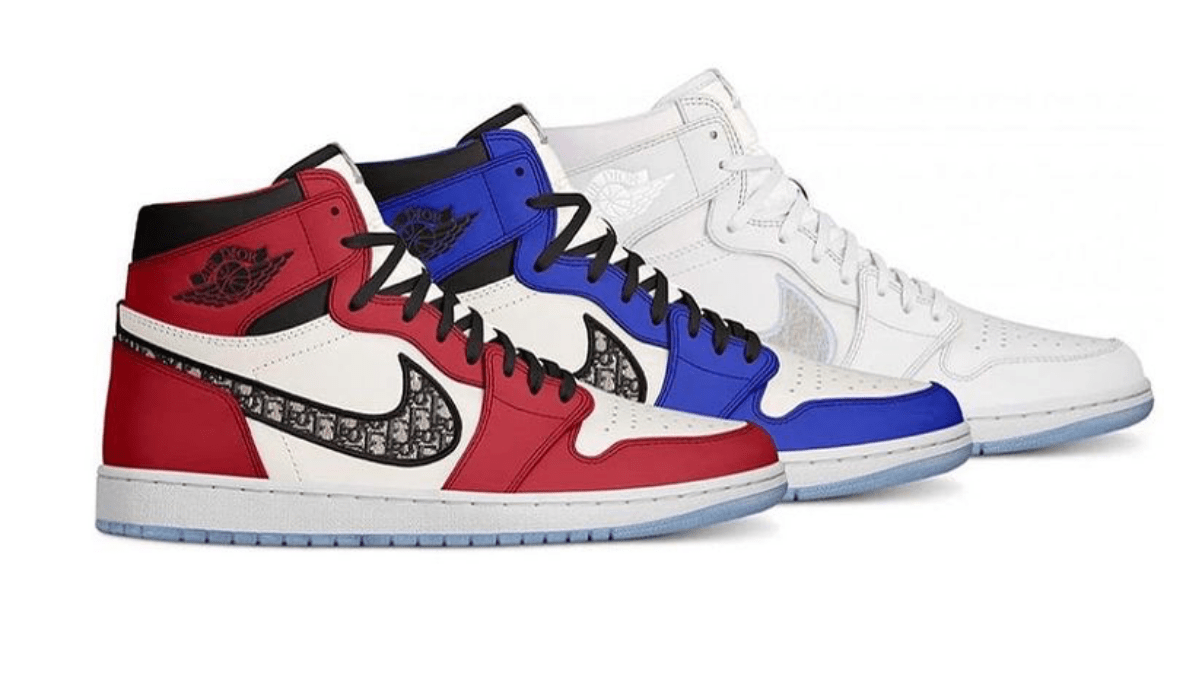 Last year, Jordan Brand released one of the most hyped Air Jordan 1 collabs we've seen to date with luxury brand Dior. Now rumours are circulating that we can expect new colorways. Yes, no kidding! A new Dior x Air Jordan 1 collaboration has been leaked, in a whopping three different colourways.

Last year, the collaboration between the two top brands was unveiled during the presentation of the Dior men's collection. The Dior X Air Jordan 1 'Air Dior' was available in both a 'high' and a 'low' version. Although at least five million people had signed up for the Raffle, the release was limited to 8500 pairs.

The sneaker cost €2,000 back then, but that's nothing compared to the current resell price. In the meantime, you can buy the kicks for €7,300.

The design is inspired by the 80s, the rich history of the Air Jordan Brand and of course Michael Jordan himself. Classic sports styles were given a new lease of life, while the Air Jordan 1 High and Low were kept in the typical Dior grey and convinced overall with minimalist, soft colours.

So far there are only rumours of high models for the renewed collaboration, whether the collab will also use the Air Jordan 1 Low for the new colourways is not yet known.

In this video you can see exactly how the hyped Dior X Air Jordan 1 High 'Air Dior' are made from high-quality products.

We have already announced that a total of three colorways will be released. We can expect a red, a blue and a white version. The red kicks are clearly inspired by the classic 'Chicago' colorway, while the blue colourway is reminiscent of the OG 'Royal' colorway. The white pair, on the other hand, is classic and minimalist and would be just fantastic for the summer with its OG reference, don't you think?

All three variants are said to once again feature a premium Italian leather base with leather overlays in the aforementioned colours. Like the first Dior x Air Jordan 1 from 2020, the mock-ups of the sneakers also come with the characteristic Swoosh bearing the famous Dior print.

If we are to believe the rumours, the colorways will be WMNS Exclusives and will therefore only be released in women's sizes. Unfortunately, there is no confirmation or official release date yet. Should the kicks really drop, we expect the sneakers to have a price tag of €2,000, just like their predecessor.

As much as we want to believe the rumours and look forward to these killer styles, the information is still minimal. Currently, there is no official confirmation from Dior or Jordan Brand about any of these rumours and so far there are no further images to be seen outside of the mock-ups. However, if any of these rumours turn out to be true, we're sure to see more information in the coming weeks and months. As soon as we know more, you will of course find out immediately in our Sneaker News or via Instagram.

What is your opinion? Do you believe the rumours or do you agree with the opinions that say it's all fake?