The road to sustainability - Interview with Peterson Stoop 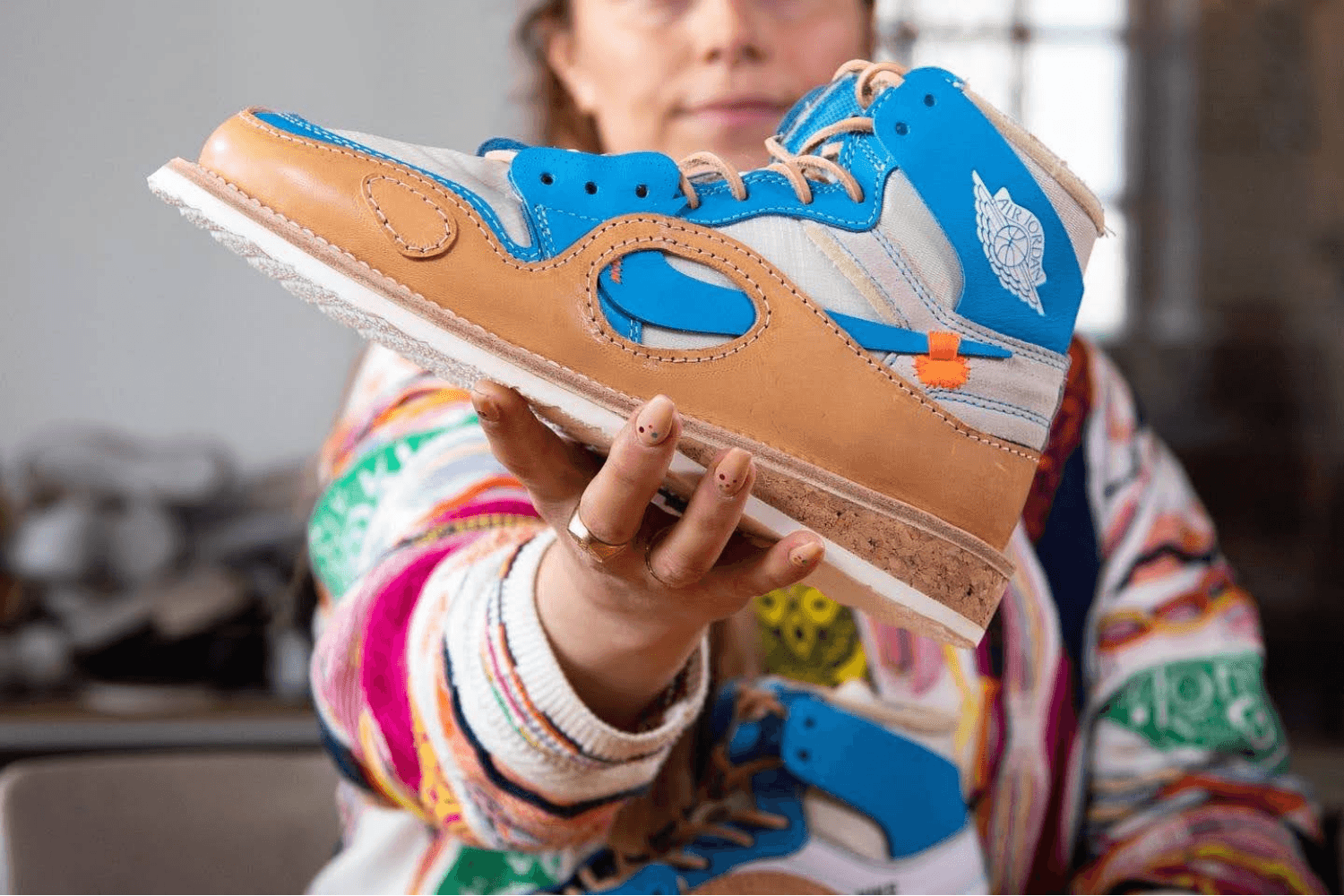 The road to sustainability - In this series, we talk about sustainability in the sneaker industry. What alternatives are there and to what extent do sneakers pose a problem to the environment? In this second part, we talk to Jarah Stoop and Jelske Peterson. Since 2013 they have their company Peterson Stoop where they repair shoes and give them a second life.

In 2013, Jarah Stoop and Jelske Peterson founded their company Peterson Stoop. With their company, they give second-hand shoes a new life. The shoes have a unique and somewhat witty look and give iconic models a twist. The soles and noses are replaced by sustainable materials that give the shoes a longer life.

"We had been looking for quite a while at what we wanted to do," says Jarah. "In a trade fair in Paris we presented a shoe. It was made of natural materials and had a leather sole with a wooden heel." When Jarah and Jelske did not sell anything at this fair, they came up with a new concept.

"We reversed our plan and put the sole on a Nike Air Force 1. From there we immediately got orders from Japan and sneakers were sent to us from New York. That's how it started to take off," says Jarah.

It started with an Air Force 1

The first sneaker to receive a new sole was the Nike Air Force 1. The white pair was given a Peterson Stoop look and a cork and leather sole. After posting a video on Instagram, the two received a lot of comments on their design. "We were filleted," says Jelske. "How dare you sit on the Air Force?"

Many of the comments were negative. Yet the two did not see this as a setback. "It's important to us as creators that there is emotion involved," says Jarah. "If there are people who find the design very ugly, it also means that there are people who actually find it very beautiful." They also both realised that their concept is not for everyone. "It's really something unique," says Jelske.

Jelske has worked as a shoemaker herself for a long time and brings much of her knowledge to the designs of the shoes. "I worked at a shoe repair shop for about 6 to 7 years and repaired hundreds of shoes here. Here I learned so much about the construction of shoes and how to improve them," she says.

Before Jarah and Jelske had their own workshop, they had a desk in the back at the shoe repair shop. "Whenever someone came in with sneakers, they were always sent away, because sneakers could not be repaired here. We heard this so often that it definitely planted a seed," says Jarah. This is how the current Peterson Stoop started.

Peterson Stoop's shoes are made in a special way. "First of all, the sneakers are taken apart," says Jelske. "We remove the sole and wash the shoe. Then we start applying the design and the shoe gets a new sole made of cork or leather."

Jarah: "You build the shoe all over again. In doing so, they use the repair techniques that Jarah and Jelske believe every shoemaker can apply. This was also the designers' initial goal. "We hadn't actually thought of Peterson Stoop as a wholesale concept at all," Jarah says. "We thought, people send us their shoes and we rebuild them."

Quite suddenly, they received a large order from London. "Our first big order came from London and consisted of 81 pairs," says Jelske. "That has grown into what it is today."

Despite the fact that Peterson Stoop works in a sustainable way, they are not very concerned with sustainability. "We don't think sustainability is very interesting either, that's the contradiction," says Jarah. "For us, sustainability is not the most important thing, it's more about the designs behind it and which materials and models we use. Sustainability goes hand in hand with that."

Jelske agrees: "It is actually a given that our sneakers are sustainable. Why would you want to put something on this world that doesn't contribute or harm the environment? There's already too much new cheap crap out there."

For Peterson Stoop, sustainability is actually quite commonplace and they find it rather special that not every company sees it that way. "I think the problem is that sneaker brands can't let go of their old familiar habits," says Jarah. "As a company, you actually have to start from scratch and rebuild a shoe from there."

Nowadays there are several sustainability projects at brands like Nike, adidas and VEJA. A good initiative, but according to Jelske and Jarah there are already so many shoes, that making new ones is unnecessary. They do understand that not everyone wants to walk around in recycled sneakers. "Recycled sneakers are not for everyone," says Jarah. "We make shoes that make sure the problem is discussed, but it's not the solution."

With their shoes, Jarah and Jelske want to do their bit. As the world's largest repair company, they are the ones facing all the difficulties. "Repairing the shoes is a very expensive process," says Jarah. Sometimes the two spend hours selecting and cleaning the shoes, only to rebuild them into a new design.

Jarah: "If we can make a small contribution to make companies think, I think we are going in the right direction. With their working method, they try to be an inspiration to big companies. For example, there are no repair facilities at big brands and, according to them, this could be a good solution. "Don't stay on the beaten path, and explore new ideas," says Jarah.

The producer plays a major role in this. "It is not up to the consumer to take full responsibility for this," says Jelske. According to her, the responsibility lies with the big brands and their marketing strategy. "Suppose Nike were to launch a cool campaign saying: 'We're all going to recycle', this would really catch on."

Jarah: "Consumers are willing, but you have to give them the tools."

Jarah and Jelske see themselves as real go-getters. "When we asked ourselves in 2013 what we actually wanted to do and what our goal was, 'don't give up' was actually our answer to everything," Jarah explains. "Even though we are the last man standing." This mindset has led them to where they are today. For example, they have been at ComplexCon in Chicago with their design in collaboration with Timberland.

"That was a really cool experience," says Jelske. "People even came up to us for our autographs." Making the shoe in collaboration with Timberland was also quite an experience. "We were asked to make the Timberland boot more sustainable and give it a new look," says Jarah. "Then we went to the Dominican Republic with some designers and some of our shoes went into production."

The two also have big plans and new ideas for the coming months. "We have a lot of goals," says Jarah. Next year, for example, they want to take it a little easier on the footwear front and free up more time to let their creativity run wild. "We also want to focus more on other applications of the patchwork material we have developed. Works of art, wall hangings and of course shoes made from patchwork".

The two are not giving much away yet. But they will be changing course in the coming months and coming up with new ideas. "What that is, we are not telling yet. In any case, it's not going to be sneakers, but it's going to be fun," Jarah says.