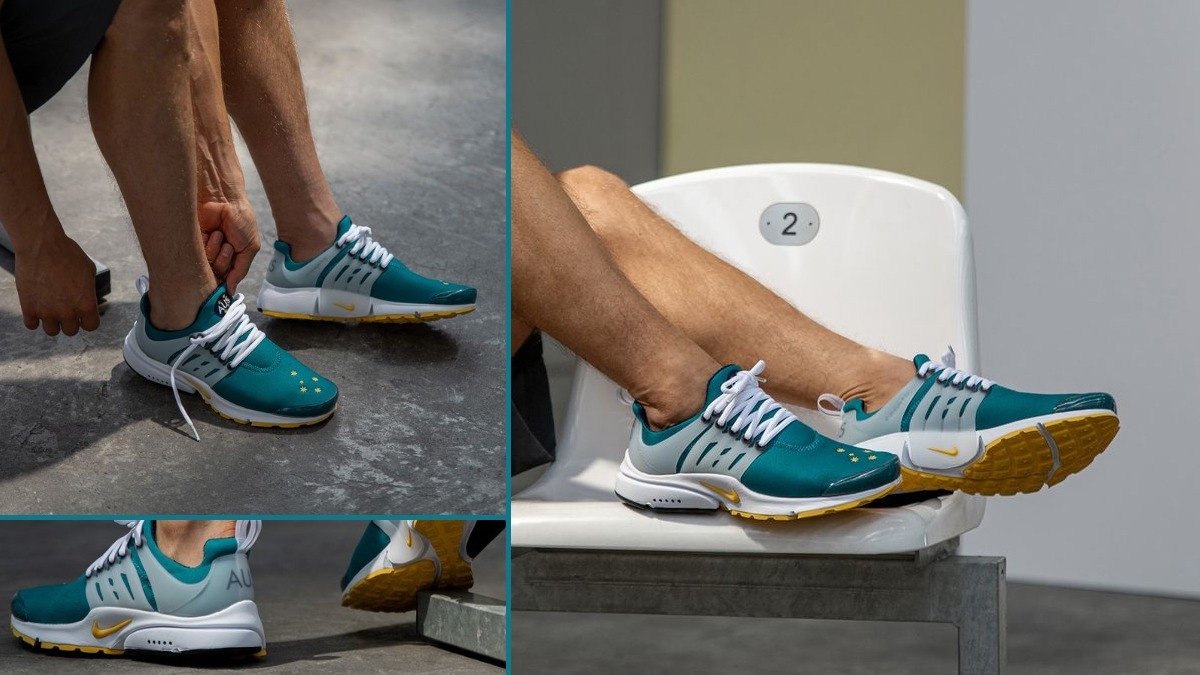 The original from 2000? So do we get a restock of the Nike Air Presto 'Australia Olympic' or what? And what makes this pair so special? Questions over questions, which I am going to answer all for you in this article. Be curious, because this Nike Air Presto is pretty special and comes with cool features.

Do you know them already? And you don't need my little detail overview? Then go to the Release Info section or head over to the bottom of this article for more pictures. FOR ALL OTHERS: Read on and get some knowledge about this fresh pair of sneakers. Ready? Let's go!

The Nike Air Presto 'Australia Olympic' will celebrate its release this week Friday, July 24th, 2020 at 09:00 am at selected retailers, such as asphaltgold. For 130€ you can treat yourself to this sneaker and hopefully rock 'em soon!

The button below will take you directly to a list of all retailers that will sell these beautiful Presto's. ⬇️

No, that wasn't a clickbait or something, it's actually true! And the question whether this is a restock, I can not answer with a clear "yes and no". But let's start with why the shoe is called Nike Air Presto 'Australia Olympic':

We get a sneaker with Australia Colors. More precisely, the sneaker comes in the same colors that the tracksuits of the Australian Olympic team had in 2000 and still have today. But more about that later! The most special thing about these fresh kicks is that they were already produced in 2000. No, we do not get sneakers with cracked yellow soles! The Presto's were produced back then for the "olympic summer games 2000" exclusively for the Australian Olympic team and their Friends & Family. So at that time it was already a good win if you could get to one of these pairs.

And now, 20 years later, the Australian sneaker & streetwear retailer "Supply Store" asked Nike if they could now produce the sneakers for the worldwide market, and with success! The Nike Air Presto 'Australia Olympic' was already been released via Raffle last week at Supply Store, and will be available in our European stores this week.

Let's get down to details!

As I mentioned above, the shoe comes in the same colours as the tracksuits of the Australian Olympic team. AND really in exactly the same design as the sneaker that was given to the Olympic team at that time! In other words, the Nike Air Presto got a blue-green upper, which got some stitchings of yellow stars under the typical seam on the midfoot. The stars match perfectly with the same colored swoosh on the white midsole and the outsole on the forefoot.

The cage comes with opaque plastic, and has the initials "AUS" printed on the heel of both shoes. But there is one more important detail: Of course, the official logo, of the Australian Olympic team, can not be missing on the tongue.

FREEESH! In my opinion a very, very nice Colorway, which convinces with simple color combos and cool details. Of course, the Presto Silhouette is a Comfort Beast anyway and has long been popular for its comfortable fit.

Are there now more pictures of the Nike Air Presto 'Australia Olympic'?

Sure! Underneath you can see some more detail shots of these beauties. BUT BEFORE:

A little "Good-To-Know": I think we all know the famous designer of the very first Nike Air Max 1 silhouette, right? Yeah, that's right, Tinker Hatfield! Did you know that his younger brother Tobie Hatfield was also signed to Nike and that he is the creator of the Nike Air Presto Silhouette? Crazy, right? #goodtoknow

Where you can buy the sneakers? Just click on the button below and we will show you which retailers will sell the Nike Air Presto 'Australia Olympic'. ⬇️