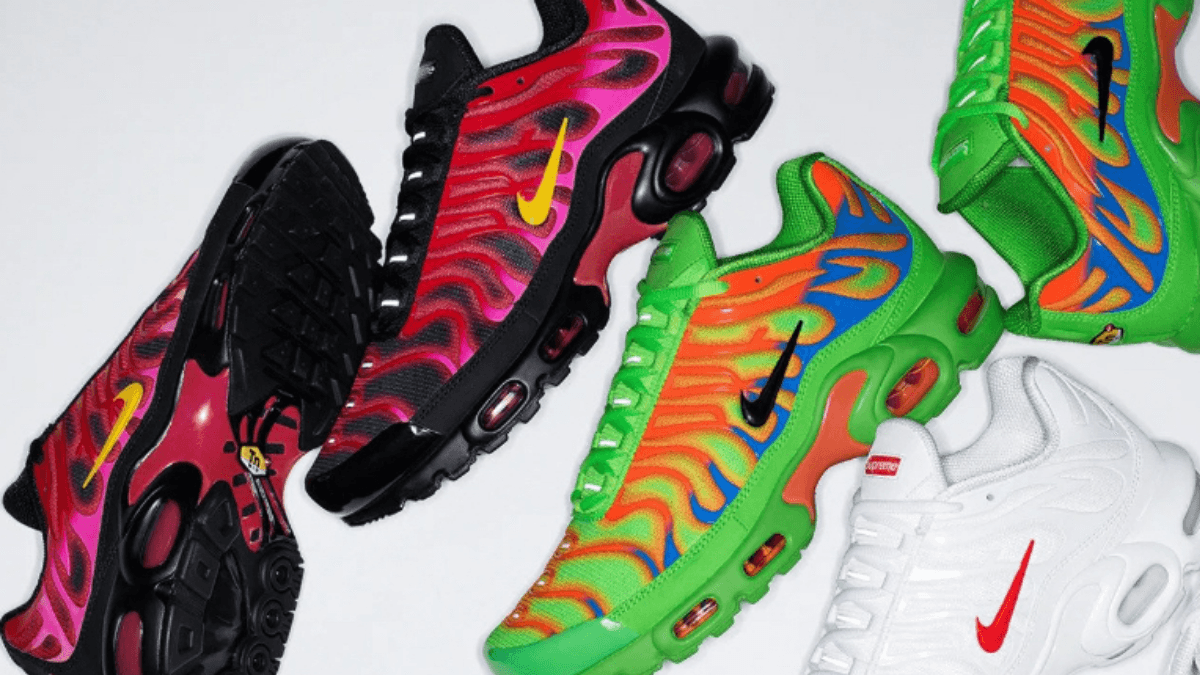 If more retailers are added, you can find out by clicking the buttons. There you can also be forwarded directly to Nike! Below we have linked some nice pics of the kicks and there you can find a little detailoverview! Let's Go!

Let us talk briefly about Supreme. What began as a small skate shop in the SoHo area of Manhattan is today, well, SUPREME! The brand stands above all for skate culture, streetwear and a special attitude. Founder and Supreme Icon James Jebbia opened the very first Supreme store in New York in 1994 and the rest is, as we know, history! Together with Nike they have also launched several fire sneakers.

With the silhouette of the Air Max Plus they have now hit the bull's eye once again when it comes to the trend. The model is currently very trendy and is of course at the top of every cop list in Collab with Supreme. The Air Max Plus also has an exciting history. Sometimes it's called Air Max TN, sometimes Tuned Air, sometimes Air Max Plus, but the style remains equally good and equally popular. What is it all about? You can read the whole TN story again in our Sneaker News this week.

The new Supreme x Nike Air Max Plus 'Mean Green' are especially impressive with their special colorway. The upper part of the sneakers is made of light green mesh. Above this mesh there are the well known wavy overlays, which are coloured blue and orange and have some colour gradients as a special feature. On the heel and the side of the sneakers we get suede overlays. On the middle foot of the kicks there is a black mini Swoosh. Another highlight are the reflective stripes on the upper.

Of course, Supreme branding is also a must here. The upper is rounded off by a green midsole and outsole with red Air Units.

The 'Black/Red' Colorway has a similar style and construction. The kicks have a black upper with many red and pink colour gradients that make up the style. Here too we have the reflective details and the mini Swoosh. The Swoosh comes in yellow and sets a nice accent. The mesh upper with TPU accents and suede overlays is also convincing in this colorway. The Tuned Air cushioning does the rest.

What kicks! It couldn't be more special, could it, dear community? Wich colorway is your favourite?