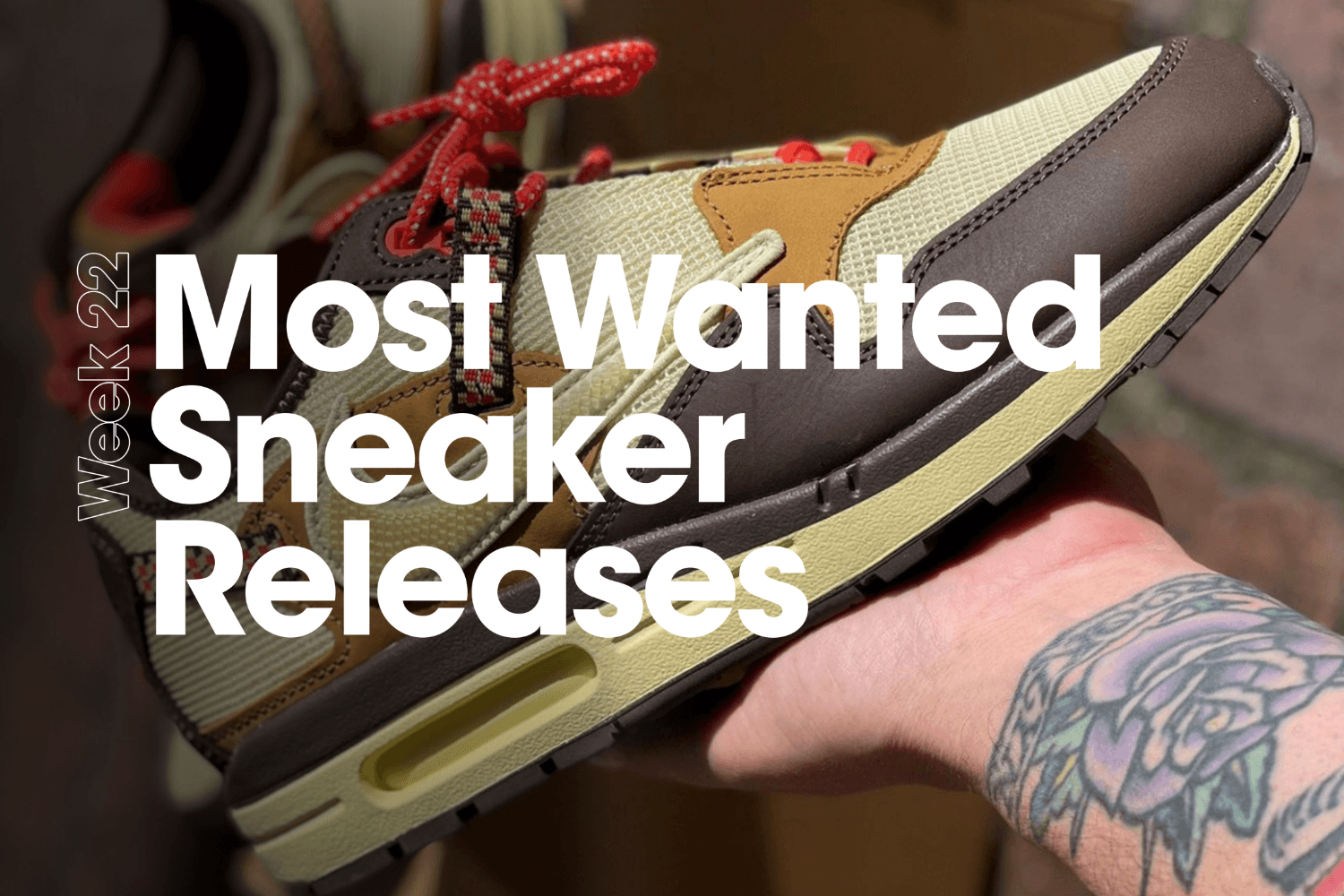 Tuesday is here again and that means it's time for us to look at the 'Most Wanted Sneaker Releases' from the previous week. In this overview we will look back at the five most wanted drops of week 22.

These releases went so fast last week that they are mainly available on the resale markets. On the Sneakerjagers resell page you will see where you can still get these sneakers for the best price.

Let's take a look at the five 'Most Wanted Sneaker Releases' of week 22.

This week's Most Wanted sneaker release is the Travis Scott x Nike collection. After the tragic events that took place at the Astroworld festival, it was appropriate to put the rapper's collaboration on hold for a while.

The Travis Scott x Nike Air Max 1 'Baroque Brown' and 'Saturn Gold' colorways are two of this year's most hyped releases. Originally scheduled to be released on December 16, 2021, the two-pack is now almost half a year later and the sneakers are being released after all.

The Air Max 1 'Baroque Brown' and 'Saturn Gold' have a lot of special details that you don't normally find on an AM1. As you would expect on a Travis Scott sneaker, the Swoosh on the middle panel is reversed. Also, the Air Bubble in the sole is covered so it is not visible. On the mid panel you will find a leather overlay, which is only found on these versions of the Air Max 1.

The 'Baroque Brown' has a colour palette that consists of different earth tones, combined with red details such as the laces and the heeltab. The 'Saturn Gold' is fully 'Wheat' coloured with grey details, also on the laces and heeltab.

It looks like Nike is fully committed to the Air Trainer 1 this year. This release includes the Travis Scott x Nike Air Trainer 1 SP in the colorways 'Ashen Slate' and 'Grey Haze'. Special details include the zip on the heel, the strap on the toe that says 'CACTUS CORPORATION'. This is also found on the heel. The 'Ashen Slate' colorway is mainly 'Chocolate brown' and the 'Grey Haze' is grey with yellow details.

Two new colourways of the adidas Yeezy Foam RNNR have also been released this week. The clog with the alien-like look has been released in the colours 'Stone Sage' and 'Sulfur'. The model is made of a soft EVA foam and algae. This makes the RNNR comfortable and durable.

The New Balance 550 'Cream' is a retro-style basketball sneaker. The upper is completely made of cream-coloured leather. The shoe also contains several black and grey details, such as the black outlined 'N' on the middle panel, the logo on the heel and the black/grey outsole. A clean hyped look!

The king of pop-up stores, Joe Freshgoods, is back with another New Balance collaboration. This time, it's the turn of the New Balance 2002R, as part of the 'Conversations Among Us' collection. The cream-coloured shoe combines suede and leather on the upper and features orange accents on the overlays and outsole.

We close the 'Most Wanted Sneaker Releases' of week 22 with the Nike Dunk Low 'Light Iron Ore'. The dunk is one of Nike's most popular models at the moment. This pair has a neutral look with some standout details. The red Swoosh on the middle panel, the yellow mini-Swoosh and the blue outsole give the sneaker a striking look.

These were the Most Wanted Sneaker Releases of week 22. If you want to make sure you know everything about the most hyped sneaker drops. Then keep an eye on our release calendar and check where you can get your pair.