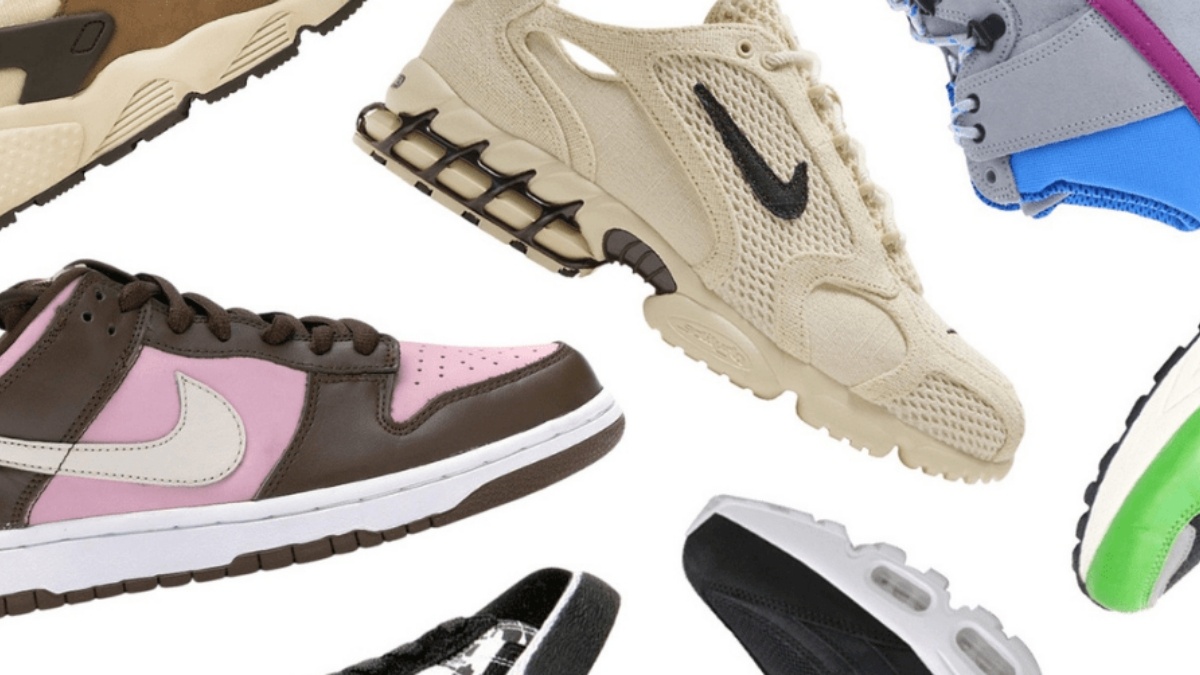 Nike and Stüssy have a rich history when it comes to collaborations. The two brands go way back and have released a whole bunch of kicks in twenty years.

Stüssy was originally a surf brand. They first sold surfboards with the now famous Stüssy logo. When more and more surfers bought the boards, Shawn Stussy (founder) thought it would be a good idea to start selling clothes as well. Thanks to Shawn's creativity, the brand became more and more well-known.

The millennium was ushered in with the first collaboration between the two brands. In the last twenty years, there have been more than twenty collaborations between Nike and Stüssy

The very first collab between Nike and Stüssy was on the Air Huarache. They released this model in two colorways, 'Desert Oak' and 'Dark Olive'. Michael Koppelman of Stüssy and Fraser Cooke of Nike worked together on this silhouette. The concept was to design two creative colour schemes on this Nike shoe.

A year later, the two brands joined forces again and designed a Nike Dunk High. In this year, this model was not nearly as popular as it is now. Especially skaters wore the Dunk at this time, even though this model was designed for basketball.

This collaboration brought chaos to the sneakerheads. This model would only be released in the Stüssy shops and they had agreed that they would only sell 24 pairs per day in each shop. This was a new marketing strategy at the time. For a fortnight there were huge queues in front of the shops of the surf brand.

After the hype surrounding the Dunk High collaboration, Nike and Stüssy focused again on a basketball icon, the Blazer Mid. This model was given a more striking colour scheme by the bright pink Swoosh and the dark blue upper. Besides this colorway, they also released another one with a grey upper and a green Swoosh.

Like the Dunk, this sneaker was produced and sold in limited numbers.

Nike and Stüssy began to appreciate striking colour schemes and brought this back to the Nike Air Huarache Light. This pair never made it to shops and was for Friends & Family only. The Stüssy logo was placed on the heel. This was the first time ever that Nike printed a different logo on their shoes.

For Stüssy's twenty-fifth anniversary, they collaborated with Nike on one of the rarest models, the Nike Court Force. The heel features various cities in Shawn Stüssy's handwriting. The toe cap, collar, and Swoosh feature crocodile leather. The rest of the upper is made of suede.

This release also included clothing. This was the first time this had happened in the history of this collaboration.

The Nike SB Dunk x Stüssy 'Cherry' is one of the most popular SB Dunk models to date. This sneaker was inspired by ice cream. The brown overlays represent chocolate ice cream, the pink base represents strawberry ice cream and the cream Swoosh represents vanilla ice cream. There is even an illustration of a cherry on the tongue to complete the look.

The 'Clerk's Pack' Blazer Mid is not quite an official collaboration, yet both parties play a big part in this model. With the 'Clerk's Pack', Nike wanted to give different retailers who sold their shoes a stage such as Size?, HUF, Union, Undefeated and of course Stüssy.

In 2006 Stüssy and Nike released the Dunk High again in different colorways. Next to the Dunk, they released a Nike Free Trial 5.0 and Nike Trainer Dunk Low. Each sneaker in this 'World Tour' collection represented one of Stüssy's shops in Los Angeles, London, New York and Tokyo.

After the success of the Nike Court Force during Stüssy's twenty-fifth anniversary, the surf brand wanted to go wild on the low version. They did this by using an eye-catching colour scheme. This pair was only available in the Stüssy store in London.

Nike and Stüssy got help from Neighborhood in 2008 to release four sneakers inspired by a surf spot in San Pedro, California. The Nike Blazer and the Nike Terminator were released in two different colorways with a Boneyards print on them.

For the 30th anniversary of Stüssy, a Nike All Court Mid was released with a snake print on the Swoosh and on the heel. On the heel was 'Nike' written in Stüssy's handwriting and on the tongue was a variation of their logo.

A year later, the two brands focused on a more unfamiliar silhouette, the Nike Sky Force 88 Mid. The upper of this sneaker was made of canvas instead of the traditional leather. This made this silhouette stand out from the crowd.

In 2012, the two brands released three sneakers inspired by the outdoors in the snow, on the sand and on the street. This collection included a winter-ready Nike Dunk High, a Lunar Braata Mid OMS and a Mogan II OMS.

Nike and Stüssy put basketball silhouettes aside for the time being and focused on sneakers from the Nike archives. Here they found an ACG pair that they wanted to turn into a sneaker that could also be skated on. With the help of the SB department, they were able to transform the Trainerendor Low.

In 2015, Stüssy celebrated its thirty-fifth anniversary and it was twenty years since the Nike Air Max 95 was released. A collaboration between these two brands with this model was then the most logical choice. Together they released the Air Max 95 in olive green, dark blue and black.

In this Nike and Stüssy collaboration, a third party stepped in. Professional skateboarder Lance Mountain helped design the Nike Blazer Mid and Blazer Low. The release came with a stencil that you could use to spray a panther print on the upper of the sneaker with graffiti.

The Nike Air Zoom Spiridon Cage 2 was very popular in Japan for a long time. Nike stopped the production of this model, which saddened many sneakerheads. Stüssy went back into the archives and re-released the pair in different colorways, including the beige colour scheme above.

A few months after the release of the Zoom Spiridon Cage 2, Nike and Stüssy released a Zoom Kukini Spiridon Cage 2. This sneaker received a white colour scheme with black details and a red lining. The model was originally a running shoe.

Stüssy and Nike did not sit still in 2020 in terms of collaborations. The two brands re-released the Air Force 1 Low with a canvas upper and an embroidered Swoosh and heeltab. This sneaker came out in beige and in black.

In 2021, Nike and Stüssy re-released their very first collaboration, the Nike Air Huarache LE. Both the 'Desert Oak' colorway and the 'Dark Olive' colorway made an appearance this year. The quality and materials are much improved from 2000.

Do you want to read news about developments in the sneaker world more often? Follow us on Instagram and download the Sneakerjagers app. In the app you can read our blogs and keep an eye on the release calendar.