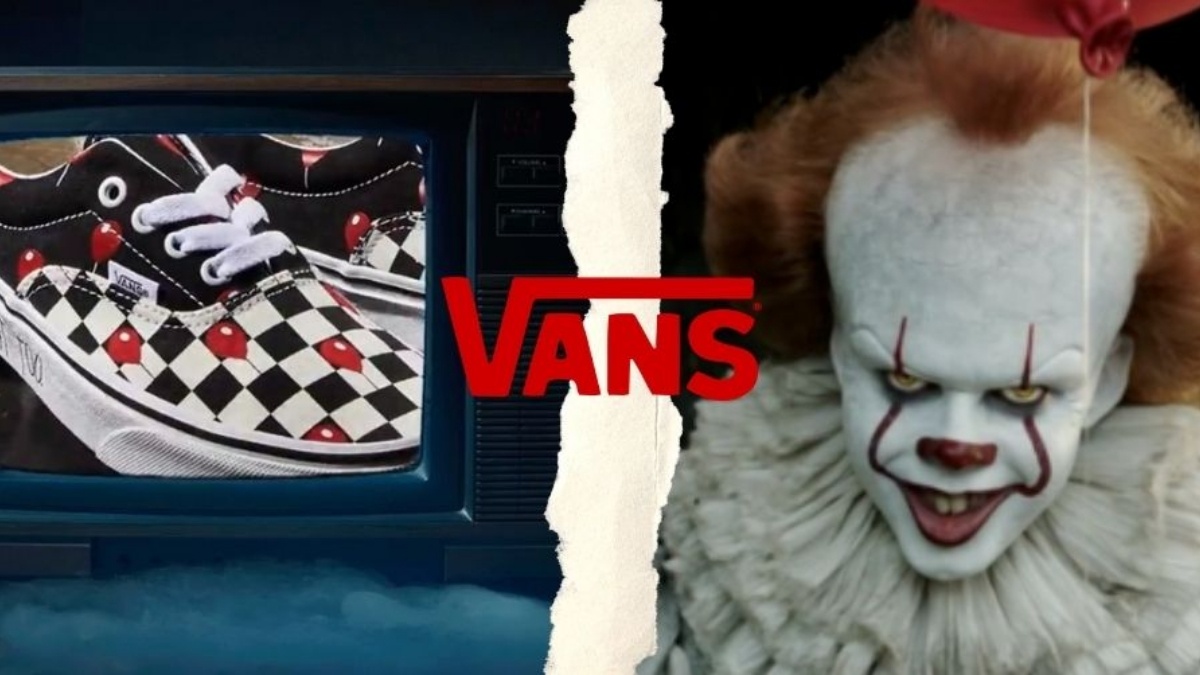 Vans announces a new collection for the spookiest party of the year, also known as Halloween. The Vans horror collection consists of four pairs and are all inspired by some classic horror movies.

The brand announced the horror collection via Twitter with a mysterious video. In the clip, we see the four couples passing by, giving us a nod to the films It, A Nightmare on Elmstreet, The Shining and Friday the 13h.

The first couple we see in the film is based on the horror film IT. The story takes place in 1986 in Derry, a fictional town in America. In the film, slowly but surely more and more children disappear, including protagonist Bill's little brother. Together with six other friends, Bill forms a group and they later find out that they are dealing with an evil shapeshifting clown named Pennywise.

On the Vans Authentics, a number of elements are placed that all refer to the horror movie. The sneaker itself is black, with on the front the well-known checkerboard print of Vans. All over the shoe red balloons can be found, these refer to the red balloons that Pennywise is frequently seen holding (and appear to be full of blood).

Furthermore, "You'll float too" is written on the midsole. The famous phrase is used a lot throughout the film, mainly as as threat to Bill's gang that they'll also float in the sewers alongside the children Pennywise has already killed. Lovely.

Vans x A Nightmare on Elmstreet

Next, Vans adds the film A Nightmare on Elmstreet to its horror collection. The film was first shown in 1984 and subsequently developed into a film series. The story is about fifteen-year-old Tina who suddenly suffers from terrible nightmares.

In her nightmares, the teenager is constantly being murdered by a figure with a hat and long knives for fingers. Later, it turns out that her friends also suffer from these nightmares. Eventually, the nightmares change to reality and the monstrous figure seems to be no stranger to the older residents.

In the film, the killer named Freddy Krueger wears a red and green striped jumper, these colours are reflected on the upper of the Sk8-Hi. The sneaker wears a black midsole and matches the stripe on the middle panel and the laces. The model is finished off with blood spatters that can be found all over the shoe.

We also have The Shining. Based on the novel from Stephen King, the film follows Jack Torrance, a recovering alcoholic who is offered a job at the Overlook hotel in the Rocky Mountains, Colorado with his family over the Winter season.

Upon arrival, Jack and his family are given a tour of the hotel. All seems well at first, but gradually the hotel begins to take a murderous grip on Jack.

So Vans adds another pair of the Sk8-Hi and they are covered in the elements of The Shining. The sneaker is mainly black with a yellow middle panel.

The Shining logo can be found all over the middle panel and is inspired by one of the posters used for the film. Finally, the model has a white midsole and we can read the word 'Redrum' on it, which is prevalent in the film's climax.

The collection concludes with the classic Friday the 13th. The story spans over twelve films that all deal with Jason Voorhees. Jason once drowned as a child at a summer camp on Crystal Lake. A few years later, he returns as an undead, supernatural mass murderer to take revenge. From the third film onwards, the killer wears his trademark ice hockey mask and carries a machete as his weapon of choice.

On the Low-Top Slip-On Vans we see Jason's famous ice shock mask. The Friday the 13th logo can also be found on the sneaker. The base of the model is black and is further covered with red and white spots. Finally, the silhouette takes a white midsole, on which no stains can be found.

Unfortunately, the exact release date of the Vans Horror Collection is not yet known. We do know that the pairs will be dropped in October 2021. Are you curious which collections of Vans will be dropped soon? Download the Sneakerjagers app and follow us on Instagram, Facebook and Twitter.