The Nike Air Max 97 and its best collabs 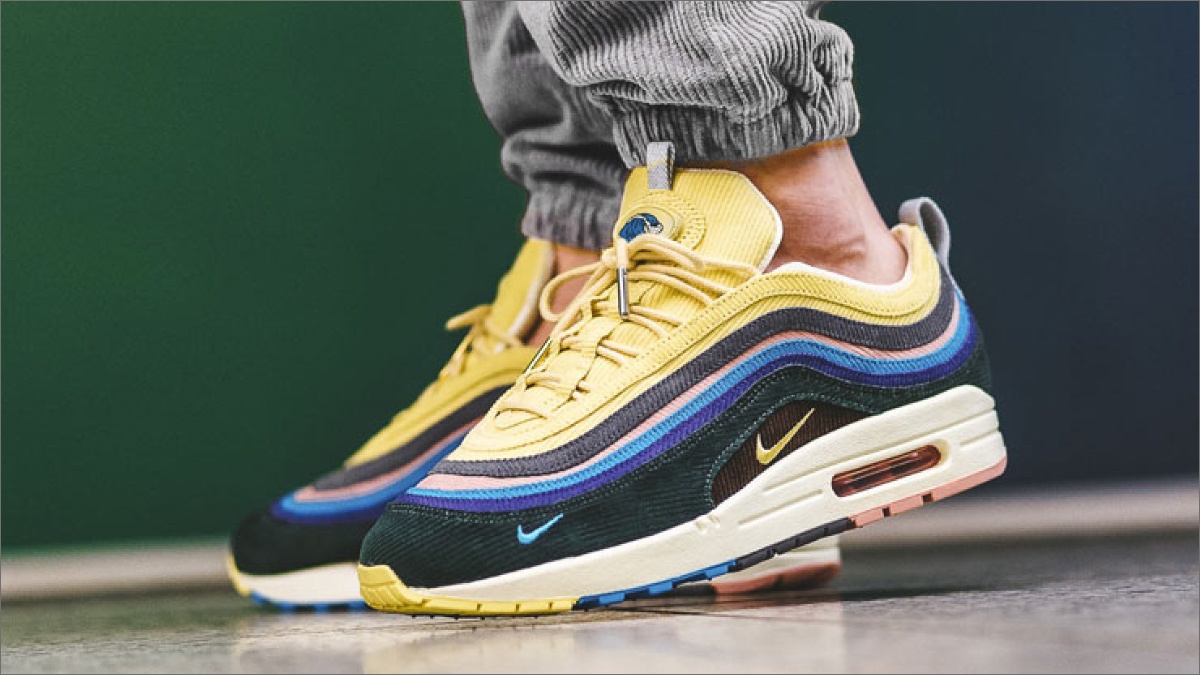 Released in 1997, the Air Max was really not a subtle sneaker at the time. On the contrary, it was flashy, chunky and unorthodox - all its elements reflected maximalist aesthetics. With its reflective layers that glow in the light and the wavy rather than straight lines that were meant to mimic the radiant ripple effect of a drop of water, it stood out. Today, let's take a look at which awesome collabs have made the Nike Air Max 97 even more eye-catching, even more popular over the years!

Innovation and Maximalism in 1997

So the 97 was an extremely innovative shoe that some say was ahead of its time. It was also the first shoe to use a full length dual pressure air unit. Further, it came with a 'hidden' lacing system, because you couldn't see the lace loops. Today that's not a big deal, but in the late 90s it was.

When it was launched, it caused a worldwide sensation: in New York, the shoe dominated the hip-hop, dance and art scenes. Melanie Chisholm of the Spice Girls, better known as Sporty Spice, was also known to wear the sneaker with her colour-coordinated sports outfits. The sneaker actually received the most popularity in Italy.

For Nike, this somehow made sense. Why wouldn't a country whose identity is deeply rooted in art, culture and innovation appreciate such an imaginative shoe? "After its introduction in 1997, the shoe became an unofficial part of the Italian wardrobe as a nationwide craze for 'Le Silver' blossomed," Nike describes in an article about Italy's obsession with the sneaker.

The first UNDFTD x Nike Air Max 97 was launched in September 2017. The UNDEFEATED brand was founded in 2002 and is a sneaker store and clothing brand. In the meantime, there are over 30 UNDEFEATED stores worldwide and the store can boast several collabos.

Also in 2017, British-Nigerian artist Skepta drew inspiration for his Air Max 97 design from his love of Nike Air and his native Morocco. He travelled to Essaouira, a coastal city much frequented by rock stars in the 60s. There he found colours, sounds and stories that would shape the Air Max 97 Sk collaboration.

"When designing the Air Max 97 Sk, we considered the colour palette of Morocco, but also the palette of the Air Tuned Max from 1999. That was the first shoe I saved money to buy, so I wanted to bring its magic to the 97 - the magic that first made me love the Air Max when I saw it as a kid."

With the Tuned Max as inspiration, the upper of the Air Max 97 Sk is made of polyutherane-coated and copper-coloured leather paired with black mesh. This is complemented by a so-called HF welding of the Swoosh logo (instead of an embroidered Swoosh).

The Air Max 97 Sk also has a Nike Ultra tooling. This reduces the weight of the original shoe and highlights its signature lines in a single-layer upper. It also got innovations in the Air-Sole and introduced a softer foam density in the midsole.

The print on the insole is then inspired by Moroccan patterns and again includes the Swoosh. The SK logo design pays homage to the Air Max TN logo and is shaped like a British socket. The braided embroidery along the tongue and heel references the ornate sportswear Skepta saw locals wearing during trips to Morocco.

To celebrate Air Max Day 2018, Nike released the Sean Wotherspoon-designed and Vote Forward Award-winning Air Max 1/97. Wotherspoon is also the face of the shop Round Two, which was originally founded in Virginia before moving to Los Angeles and then New York City.

The sneaker is a mix between the Air Max 1 and the Air Max 97. In addition, Wotherspoon channelled his penchant for 90s references by choosing a multicoloured corduroy upper. Design details include a small Swoosh branding, corduroy pull tabs, interchangeable tongue patches and four lace options.

Sean Wotherspoon is an absolute must-know in the sneaker scene. We have already enjoyed several collabs with the designer by sneaker brands. Most recently, it was the collaboration with adidas that made our hearts beat faster.

Besides these awesome collabs, there are also some crazy colorways. The Nike Air Max 97 Golf 'Grass', for example, has an upper made of artificial turf. This makes it both whimsical and unique.

Also outstanding is another symbiosis of two legends: Here, the silhouette of the 97 is paired with the Nike Air Max BW. The sneaker world has long been waiting for the re-release of the OG colorway 'Persian Violet'. Here you have 'both':