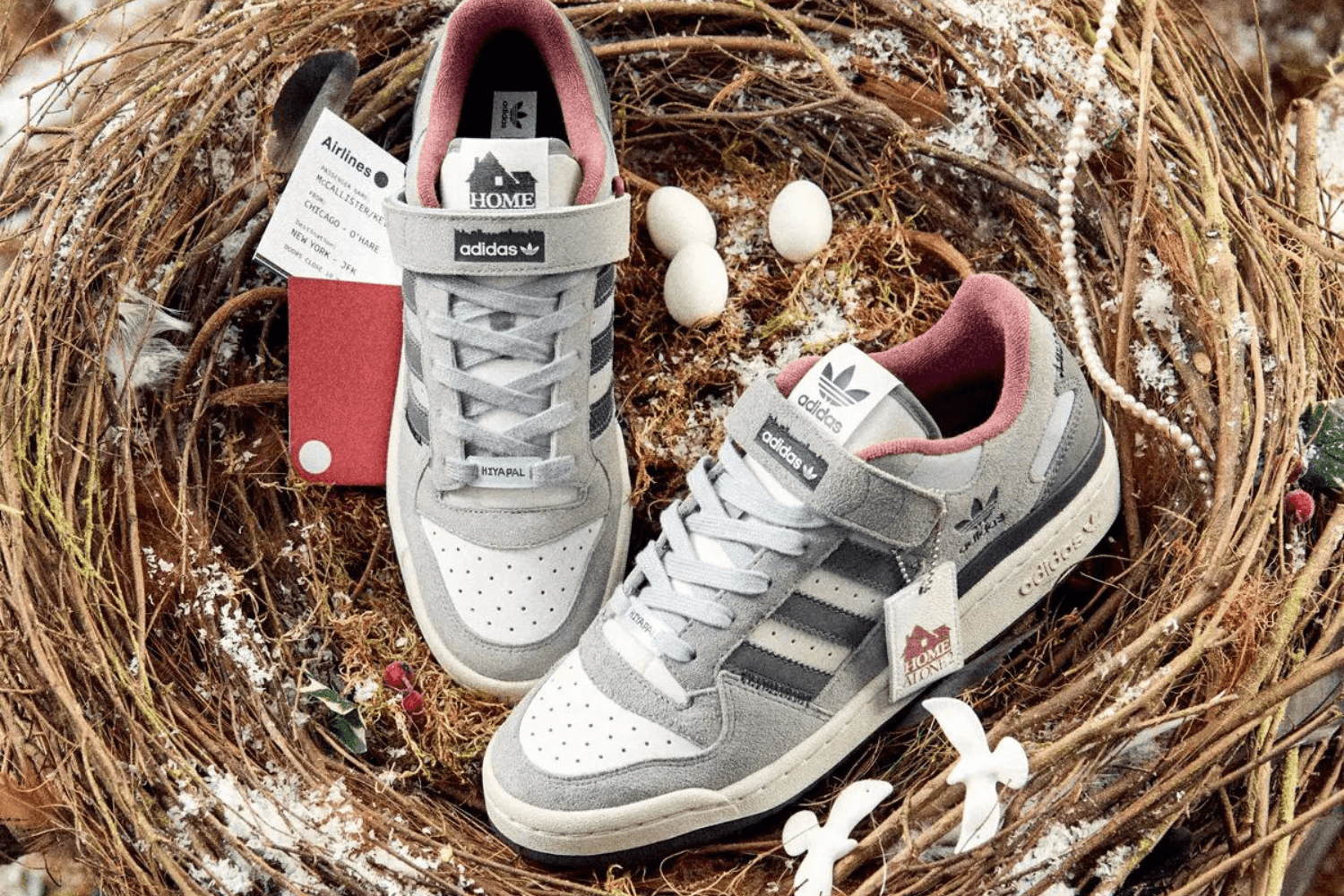 adidas reunites with the well-known Christmas film Home Alone and comes up with the Forum Low 'Pigeon Lady'. The sneaker has a grey colorway and hints at the 'pigeon lady' from Home Alone 2. The shoe will be released on 12 December 2022.

With Christmas just around the corner, adidas comes up with a new collaboration with the Christmas movie Home Alone. Back in 2021, adidas partnered with the well-known Christmas film and released a red and white Forum Low. This sneaker hinted at the booby traps from the film and had various scratches and patches all over the silhouette.

Now the brand comes out with a second colorway of the Forum Low and this time the second Home Alone film has been used as inspiration.

In Home Alone 2: Lost in New York, Kevin, the protagonist, is once again all left behind by his family over Christmas, this time in New York. Here he runs into the same thieves who broke into his house during the previous Christmas, Harry and Marv.

Harry and Marv, two clumsy thieves operating under the name "Sticky Bandits", plan to rob the biggest toy shop in New York. When they bump into Kevin, one booby trap after another comes along and Kevin tries to stop them from robbing the toy shop.

A notable character from Home Alone 2: Lost in New York, is the 'pigeon lady'. When Kevin takes a walk through the park, he runs into a woman with pigeons around her. What looks like a terrifying figure eventually turns out to be a friendly woman seeking comfort with her pigeons.

Later in the film, the pigeon lady helps Kevin escape Harry and Marv. The Home Alone 2 x adidas Forum Low 'Pigeon Lady' pays tribute to the woman from Central Park. The sneaker colours grey and has various details that hint at the 'pigeon lady'.

In the film, the 'pigeon lady' and Kevin eventually become good friends. As a thank you for everything, Kevin gives the woman a pigeon figure and the other he keeps for himself. "As long as we have our turtle dove, we'll be friends forever," Kevin said. This quote also makes its come-back on the adidas Forum Low.

Like the previous Home Alone x adidas Forum Low (2021), this variant also comes with several details that hint at the film. The lace-up tag features the text 'Hiya pal', a quote from Harry when he runs into Kevin. The insole features the Home Alone 2: Lost in New York logo.

The sneaker comes with three different laces. The well-known strap is placed on the instep, on which the adidas logo is placed. The collar colours burgundy, hinting at the colour of the 'pigeon lady's' coat. The centre panel features the three adidas stripes.