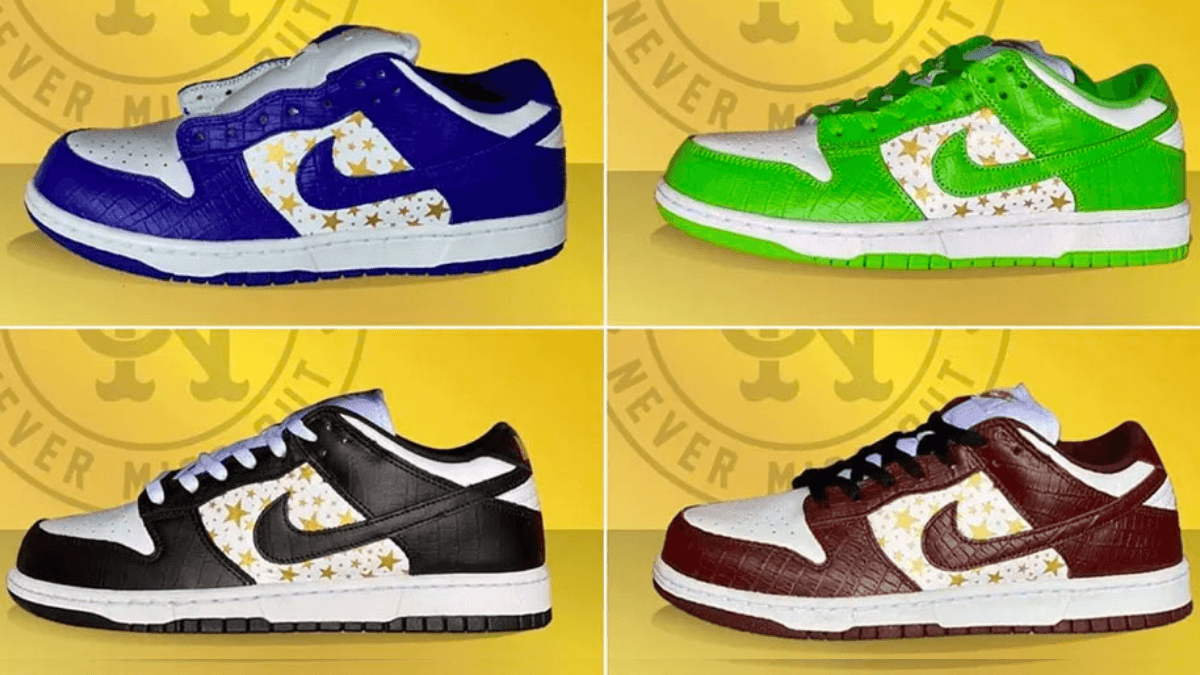 Supreme and Nike are working together on the Supreme x Nike SB Dunk Low OG QS. After a while of seeing rumours and images pass by, clear pictures have now appeared. Read here all the information we have about this collaboration!

Supreme has dropped a Nike SB Dunk before. This was a tall Dunk with coloured crocodile leather and stars on the side. This one dropped in 2003 in a light blue and red colorway. The sneaker was very popular and is still hard to get. But don't worry, the upcoming collaboration has the same details, in a low top version!

We expect this Supreme x Nike SB Dunk in 4 colorways. A black, blue, green and brown one. All four colorways feature crocodile inspired leather overlays. The swoosh also has this coloured crocodile print. Gold stars can be found on the otherwise white top. Furthermore, the Dunks have a white midsole and a sole to match the colorway. Take a look at the first pictures, of all 4 colorways at the bottom of the blog!

We expect the Supreme x Nike SB Dunk Low OG QS in 2021. A release date will appear in the release calendar as soon as we have it. Updates and more information can also be found in our blog posts. Also follow us on Instagram for extra sneaker news and content.

One thing more: Did you know, that Supreme has a new owner? The fact that Supreme is a hugely popular streetwear brand was also noticed by fashion giant VF Corp. who took over. With this acquisition, Supreme joins brands such as Timberland, Vans and The North Face, which VF Corp. also owned.