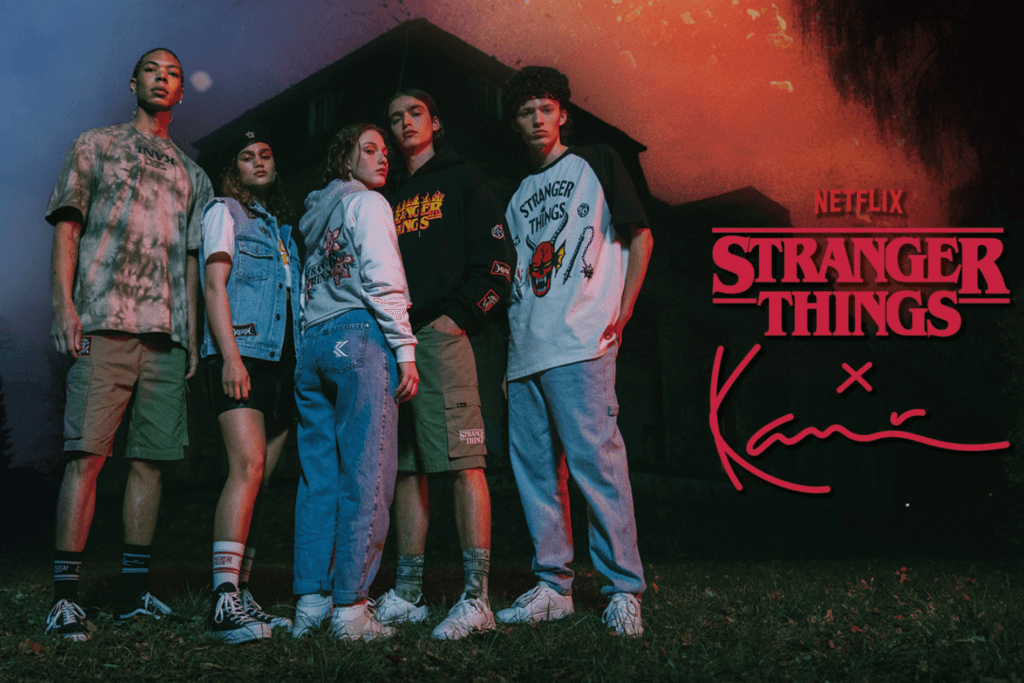 Whether you're a fan of Stranger Things or not, you can't ignore it anymore. The '80s-inspired science fiction series has already won more than 65 awards and been nominated for more than 175 different awards. This includes six Primetime Emmys and one Golden Globe Award.

In May, the first seven episodes of the fourth season were released. These again received excellent critical acclaim, especially for the mature acting of the young actors. On July 1, volume 2 of this season was also released, which consists of two extra episodes.

To celebrate this release, 'the Godfather of streetwear' Karl Kani has teamed up with Stranger Things for a clothing collection. These pieces take inspiration from the new locations and different storylines. The Karl Kani x Stranger Things collection is now available at Snipes. Let's take a look at the items.

In the new season, sunny Californian surfer vibes from the 80s and science fiction horror come together in one world. This inspiration can also be found in the 28 different items from the collection.

For the men, the collection includes 13 garments and 7 for the ladies. There are also 8 accessories for everyone. From the colours and looks, to the textures and fits, these items look like they are actually from the Stranger Things universe.

The collection is packed with tops for men. A striking item is the petrol-coloured Hawkins college jacket. This satin garment perfectly captures the Californian 80s feeling of the fourth season.

On the chest is a logo with the text 'We're not in Hawkins anymore', which is a reference to the new season. The back is covered with a large Stranger Things logo and a graphic of a Demogorgon.

The Karl Kani x Stranger Things Woven Signature OS Patch Hoodie is a retro skate style hoodie. On the chest is a graphic with the name of the show with flames above it.

On the sleeves are patches that refer to Hawkins Dungeons and Dragons association 'Hellfire Club'.

For the hot days, there are two more fresh tops. The summery Karl Kani x Stranger Things Chest Signature Resort Shirt is made of 100% cotton. The base is a light blue colour with a floral print on top, between which there are graphics of the Demogorgon. There are subtle references to the series on this shirt.

The Karl Kani x Stranger Things Woven Signature Block Boxy Print Tee is white with black sleeves. On the chest is a large graphic of the Hellfire Dungeons and Dragon club. The dagger, morgenstern, demon and the dice are all elements that are part of the role-playing game.

The Pinstripe T-shirt has a clean retro look. A pattern of red vertical stripes runs across the white base.

There is also a vintage style tie-dye t-shirt. Kani is upside down on the chest, which of course refers to the upside down. On the back is a graphic of one of the monsters from upside down.

For the men, there are four more different shorts. The light blue Signature Mesh Shorts match perfectly with the pinstripe basketball t-shirt.

The Signature Trackshorts is a black retro style running short. On the left leg is Kani upside down and on the right leg again a graphic of the Demogorgon.

There are also several cool items for the ladies. There is this grey crop top hoodie with the Karl Kani logo.

On the back is the logo of the show in combination with the well-known Demogorgon.

With this sleeveless denim vest, you can clearly show that you are under the spell of Stranger Things. On the top are several patches from the Hellfire club.

The dice on the right chest are a reference to the role-playing game Dungeons and Dragons.

For the ladies, there are also these different tees on offer. The first tee is a crispy white crop top with a flaming Stranger Things print.

There is also the oversized washed print tee dress. On the front, you will find a dark graphic with the group of main characters. There is also a print with the text 'The Party'.

Finally, there is a short black top with horizontal stripes in green, yellow and red. On the back is a large white graphic with the text 'We're not in Hawkins anymore', which of course refers to the new location of the series.

The black synthetic leather skirt contains various patches from the 'Hellfire Club'. There is also a zip in the middle.

Finally, the Karl Kani x Stranger Things includes six different accessories for him and her. With this vintage style, you will be perfectly prepared for the summer season.

There is a red beach bag, a reversible bucket hat and a visor that are ideal for a day at the beach. There is also a cream-coloured trucker hat with a graphic from the series on the front, which is perfect as a fresh summer hat. Finally, there is an old-fashioned beret with a small graphic.

These were all 28 items from the summer Karl Kani x Stranger Things collection. Do you want to score one of these items? Click on the button below.