Paisley Vans and a brief history of the print 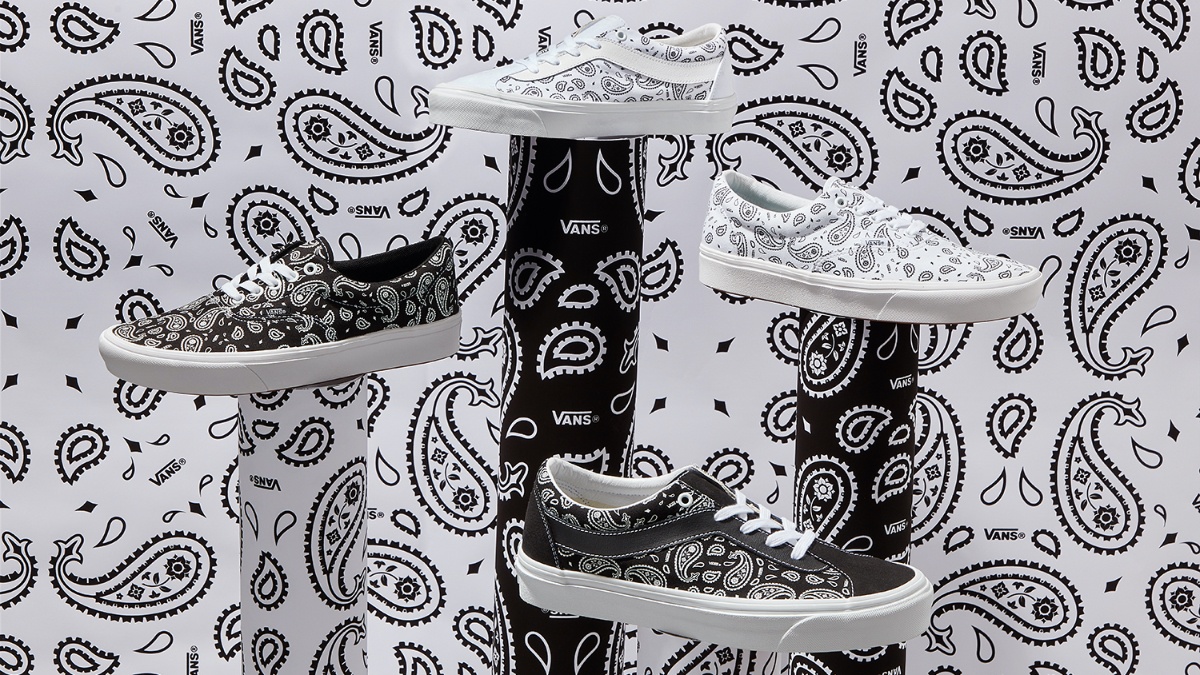 Freedom, summer, independence. That's what I associate with paisley today. Do you agree with me? But how many of us actually know what's behind the pattern? Let's take a closer look at the print today and then take a look at some great paisley Vans, because hardly any other brand stands more for Californian sunshine, the sound of the waves in our ears and hair tousled by salt.

Looks like I really need a holiday when I digress like this, eh? It's not too long now and until then - as I said - I'll pass the time with feelings of freedom on my feet.

What is paisley anyway?

The iconic pattern has come a long way from its ancient Persian and Indian origins. What also makes it exciting are the hidden messages and mysterious symbolism.

The paisley pattern travelled from East to West on the Silk Roads, adorned the neckerchiefs of cowboys and bikers, was adopted by the 19th century boho scene, popularised by the Beatles, ushered in the hippie era and became an emblem of rock 'n' roll and swank.

Where does the paisley pattern come from?

As I have already mentioned, Paisley has a long history and tradition. For that, let's go back to what is now Iran. There it was already used on textiles in the 3rd century. Historians believe that the well-known teardrop-shaped pattern is the Zoroastrian symbol for life and eternity.

In Qajar and Pahlavi dynasty Iran, a floral motif called buteh - a precursor of the paisley pattern - enjoyed great popularity. It was used for clothing by the ruling family as well as by large parts of the population.

At the time, it was one of the most popular patterns in the region. Moreover, it was frequently encountered in Azerbaijan. From its religious origins, the pattern eventually developed into a widespread decorative element.

Even today, paisley is extremely popular in the countries of South and Central Asia. It is mainly used on high-quality and noble textiles such as silk. In Iran as well as in Uzbekistan, the use of the pattern goes far beyond textiles and includes architecture, painting, jewellery, sculpture, pottery and garden design.

In Tamil Nadu in India, the pattern is found on the traditional Kanchipuram saris. Sometimes, therefore, the paisley pattern is also associated with Hinduism.

But you've probably also seen the big beach towels with paisley prints among the backpackers. The name of the print is actually derived from the town of the same name in western Scotland. In the mid-19th century, this town was a centre for weaving, where scarves were made.

The name Paisley, which is commonly used in Europe, is derived from the town of the same name in western Scotland. This was a centre for weaving in the mid-19th century. The weaving mills there used the pattern for scarves.

Paisly and a rebellion

It was in the 19th century that the paisley pattern first found a rebellious, progressive following. Its history was part of a wider "dialogue" between Eastern and Western cultures, says Dennis Nothdruft, curator of the Liberty in Fashion exhibition, BBC Culture. "It was a cultural exchange, but also an industry".

In the 1960s, paisley experienced another fashion boom, to which the Beatles also contributed. In their Orient-influenced phase, the band was crazy about paisley, and John Lennon even painted his Rolls-Royce with the pattern.

It became emblematic of the "Summer of Love" and the often breathtaking aesthetics of the psychedelic era, which hit the hippie zeitgeist with its dizzying acid-trip patterns and melting colours.

Since then, paisley has been a staple of rock 'n' roll, informed by its early oriental symbolism, its 19th century progressive boho aura and its irrepressible connotations with 1960s free love.

It has been worn - with due pride and swagger - by David Bowie, Prince (who called his record label and studio Paisley Park), Paul Weller, Bobby Gillespie, Liam Gallagher and Florence Welch, among many, many others. Gallagher even started a clothing brand, Pretty Green, specialising in the print. "He has a certain richness, an exuberant quality," says curator Nothdruft. "It has this flamboyant connotation, it's a look that says 'notice me'. Paisley pushes the boundaries."

Fun fact about the subtext of the print:

“Throughout the decades, paisley has always been a popular print for men’s ties. I’ve always found it intriguing that a design that is purported to derive from Indian fertility symbols has always been prevalent on an item of clothing that, by its very nature, acts as an arrow pointing down the torso of its wearer to his groin.”

So, long enough dancing around history, now it's on to the shoes. It was only in July 2021 that a new collab with some paisley highlights was launched: Vault by Vans x BEDWIN & THE HEARTBREAKERS.

By the way, Vans Custom also has a few paisley patterns for you to choose from. The skater brand even offers you some sustainable options for your kicks.