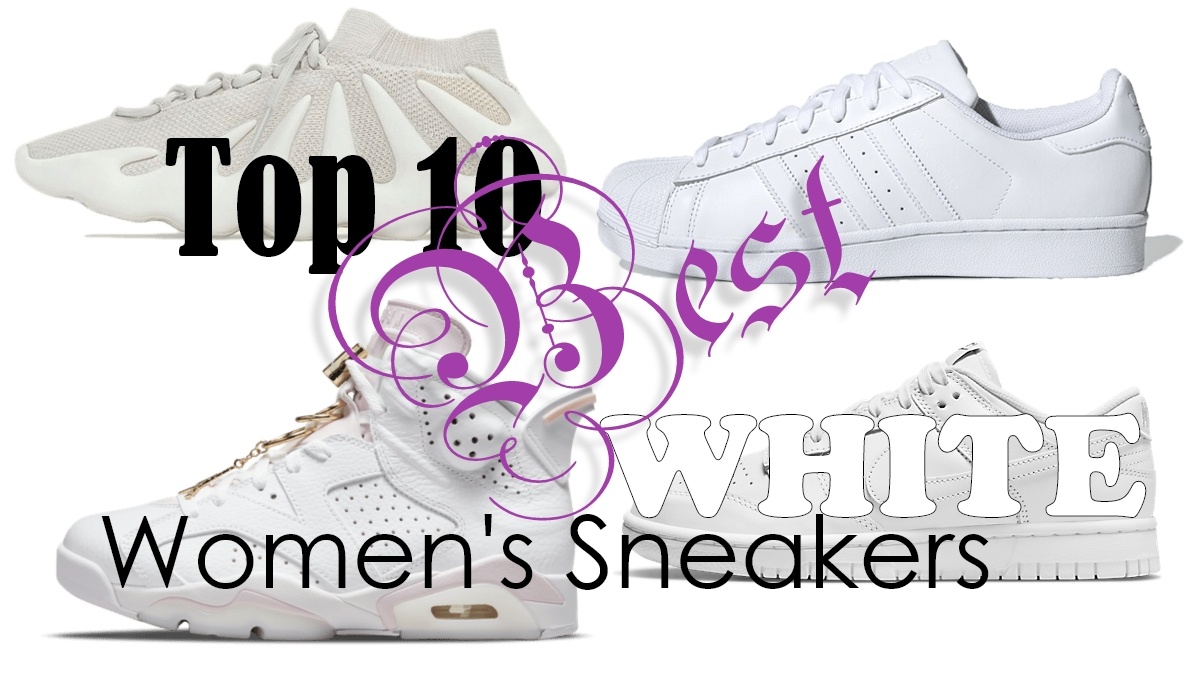 Lately we have seen a lot of sneakers drop in a white colour scheme. Whether they are from Nike, adidas or New Balance, these white pairs are easy to combine with many outfits. Especially for you, we have put together a top 10 of the best white women's sneakers.

We start the series off right with one of our favourite models from Nike. The Air Force 1 was first released in 1982 as a basketball shoe. In 1984, the production of the shoe was stopped for a while.

Two years later, in 1986, the sneaker was continued again, with the silhouette receiving a few changes. Since then, the model has received a lot of different colorways and the sneaker has also been used for many collaborations.

Next, we have the popular New Balance 550 in a 'White Grey' colorway. The 1989 model is a lifestyle sneaker and was originally called 'P550'.

The silhouette was brought out of the archives in 2020 by Aimé Leon Dore for a comeback. The 'White Grey' was released on 4 February 2021 and the model immediately received a lot of attention.

The Yeezy Boost 350 V2 also received a white variant. This was called the 'Cloud White' and was dropped in 2019. The sneaker got two variants where the upper of one was reflective.

The reflective 'Cloud White' was then given a restock on Yeezy Day in 2021. The model was available through raffles.

Another popular pair with a white colour scheme is the Air Jordan 4 'Oreo 2.0'. The sneaker was released in 2021 and sold out in no time.

Yet this is not the only pair from the Jordan 4 collection that was dressed in a white jacket. In 2020, the Jumpman brand came out with the Air Jordan 4 'Metallic' line. The Jordan 4 model received several variants where the accents on the sneakers were dipped in a 'Metalic' colorway.

Of course the pairs from the collaboration between Converse and Comme Des Garçons can't be missed on this list. In 2009, the two brands sat down together for the first time and released the first version of the CDG x Converse Chuck Taylor.

In 2015, the two brands released a new variant of the model. On this variant, the heart on the middle panel was enlarged. Since then, these kicks have been unmissable in the sneaker world. In 2021, the silhouette received a restock, re-releasing the model in both low-top and high-top.

The adidas Forum Low 'White' is also a must-have. The model was designed by Jacques Chassaing in 1983. For the design, Jacques took his time to observe the sport of basketball. Based on his results and conversations, he soon noticed that the players needed better ankle supports.

Jacques designed the model with a Velcro strap at the ankle. The shoe was subsequently launched in 1984 and, in addition to its functionality, also became very popular due to its looks.

Available at 17 webshops
View all retailers

The year of the Dunks is certainly not over yet, which is why the Dunk Low 'Triple White' is also among our top 10. The sneaker was first released in 1985 and was designed by none other than Peter Moore. The model was originally called the 'Nike College Color High'.

For the upper of the Dunk, Peter took his inspiration from two other Nike pairs, the Air Jordan 1 and the Nike Terminator. Eventually, the kicks received the name 'Dunks' because the shoe was made specifically for basketball.

Another white classic is the adidas Superstar 'Triple White'. With its simple silhouette and white colour scheme, these kicks are suitable for any occasion.

One of the most famous elements on the model is the shell toe box. This is why the Superstar got the nicknames 'shell toe' and 'shell tops'.

Especially for the ladies Nike released the Air Jordan 6 'Gold Hoops'. The sneaker is part of the Women's Exclusive's line and was released in July 2021. What makes the pair so remarkable are the gold hoops and lace lock on the laces.

The silhouette was released in 1991 and has since received a lot of colour schemes. Besides being very popular on the basketball court, the pair can also be combined under a stylish outfit.

We conclude the list of best white women's sneakers with one of Kanye's most unique pairs, the adidas Yeezy 450 in a 'Cloud White' colorway.

In 2020, the model was spotted on Kanye West's feet at the Yeezy Season 8 fashion show during Paris Fashion Week. The model immediately caught the eye, especially as the silhouette was different from what we were used to seeing from the Yeezy. Eventually, this unique pair was released in 2021.

This was our top 10 picks of best white women sneakers. Of course, there are many other white sneakers for women and we can expect to see this colour on a lot of models.

Want to read more of these top 10 blogs for inspiration? Then download the Sneakerjagers app and take a look at our sneaker news. Also don't forget to follow us on Instagram, Facebook and Twitter to stay up-to-date on future white women's trainers.