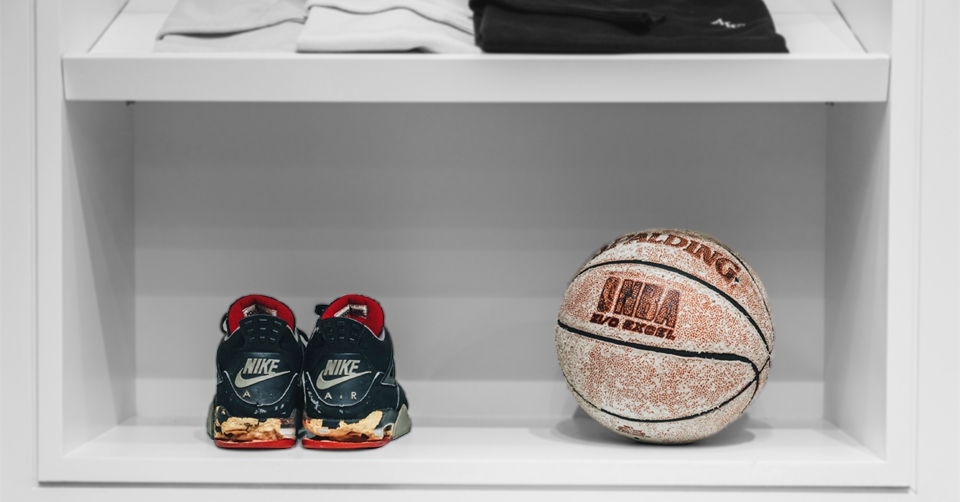 Who is this Michael Jordan? Why did he get an exclusive Nike contract? Which Air Jordan models are available? Is 'Jordan' an own brand? That, and much more, you can find out here in this article!

Little MJ first saw the light of day on February 17, 1963 in New York City. Doctors knew already then, that this baby would go far. Because when Jordan was born, his first word was not 'Mommy' or 'Daddy', but 'Nike'! So Jordan signs the Nike contract with his baby hands! - All jokes aside, dear community, if this story were true, it would probably be the best Nike commercial ever!

Back to how Michael Jordan really fell under the Nike radar: MJ was born in New York, but grew up in North Carolina. From 1977 on, like any decent boy, he attended a high school, Laney High School. But the funny thing was that Michael didn't make the basketball team there! Who knows, maybe the admission requirements for the basketball team used to be different and harder. But little Michael wasn't discouraged by that and in the following two years he trained so hard that he got the interest of talent scouts! MJ was also offered several sports scholarships! As you can see, Michael Jordan didn't let himself get down after his refusal to join the basketball team and stayed on the ball!

Before the Chicago Bulls…

Before Michael wore the Bulls' red jersey, he played for the University of North Carolina basketball team at Chapel Hill! Young Jordan knew where his strengths lay at the time and scored game after game. The basketball team UNC Tar Heels won the NCAA Division, a basketball championship, with MJ. But the real top performance MJ achieved at that time was his gold win at the US Olympic Games in Los Angeles!

In 1984 MJ's career with the Bulls began. Michael Jordan was top scorer in his rookie season and exceeded the team's expectations. At the end of the season, Jordan even won the title 'Roockie of the Year'! But as you know, Michael didn't rest on his laurels after the first season, but scored even more and took several wins for the Chicago Bulls!

An even more noteworthy victory would be the 1993 NBA final! The Eastern Conference playoff champions, the Chicago Bulls, led by Michael Jordan and the Western Conference playoff champions, Phoenix Suns, won 62 games and were led by the MVP of the regular season, Charles Barkley. The Bulls were the first team since the legendary Boston Celtics in the 1960s to win three championship titles in a row, and with John Paxson's playful 3-point win giving them a 99-98 win in Game 6! Let's go Bull! But how did the Nike deal come about and why Michael Jordan, of all people, was chosen, you'll find out right now!

How Michael Jordan came to Nike or Nike came to him remains a mystery - but we and your dear community know one thing - it was a really good deal! The Air Jordan silhouette is without a doubt one of the most iconic shoe silhouettes ever. As you've heard before, MJ was at Laney High School, the University of North Carolina and the Chicago Bulls - he made an impression at every stop. The Air Jordan line was first added to the Nike line in 1984. A year later, Nike entered the sneaker scene with the first Jordan. The Air Jordan 1 had a red-black color scheme, matching the uniform of the Chicago Bulls. Maybe that was the reason why the then NBA commissioner David Stern banned the shoe!

Stern fined Jordan $5,000 every time he wore the shoes, claiming that the shoe did not have enough white to match the Bulls' uniform. Nike used this attention as an advertising vehicle and by 1986 the sneakers were so popular that a new Jordan sneaker had to be launched. Since then, the line has released a new pair of Jordans about every year. In addition to the shoes, the 'Air Jordan' brand also sells a variety of clothing such as hoodies, sweatshirts, etc. and has signed 42 professional athletes from various sports, including football, baseball and basketball!

Enough of Michael Jordan and straight to pleasure! Here we present you the 'Air Jordan' models from I to XIII! Why? Because from the XIII on, the Air Jordans are mainly designed for basketball.

Disclaimer: The 'Air Jordan models' are sorted by release year, after that the first releases are from the respective model! Enjoy the timeline!

The first Air Jordan 1 High debuted in 1985 and was the first shoe designed by Nike for Michael Jordan for the Air Jordan Signature line. The basketball shoe, designed by Peter Moore, looks like a simple 'Nike Dunk' inspired design that includes the Swoosh and Wings logo. The other Nike basketball shoe, the Nike Air Force 1, was released in 1982, but back to the Air Jordan 1, which included the famous Air sole when it was released.

The Air Jordan 2 was originally launched in 1987 and was designed by Bruce Kilgore. The Air Jordan Wings logo is prominently displayed on the tongue. The AJ II was made in Italy and had real Italian leather.

The Air Jordan 4, originally launched in 1989, was the second Air Jordan designed by Tinker Hatfield. The sneaker has a mesh on the tongue and sides, as well as plastic wing flaps and once again has visible Air in the heel! Take a closer look at this beauty below!

The Air Jordan 5 was released in 1990 and Tinker also had his hands on it. He gives the Air Jordan silhouette a reflective 3M tongue, mesh and flames on the midsole. World War II fighter planes served as inspiration for Tinker. The AJ 5 was also the first Air Jordan with a translucent outsole.

The Air Jordan 6 appeared on the market in 1991 and Tinker Hatfield was also at work. They have a visible Air unit in the heel area, as well as a translucent outsole, a molded rear heel strap and a set of laces.

By the way: The Air Jordan VII 'Hare' was released in another colorway. Click here on 'Bugs Bunny, is that you? The new Colorway for the Air Jordan 7 PE ‘Hare’'. Also check out Dina's blog 'The Air Jordan 6 Retro ‘Hare’ is coming!'

The Air Jordan 8 was released in 1993 and was also designed by Tinker Hatfield and was the last Air Jordan to be released before MJ first retire from the NBA. The shoe had a strap on the upper, a full-length air sole, a polyurethane midsole and a polycarbonate upper. See you MJ…

The tenth signed sneaker for Michael Jordan, originally released around 1994. The AJ 10 shows MJ's accomplishments from 1985-94 on the bottom of the outsole. How many stripes do you see?

The Air Jordan 11 made its debut in 1995 as Michael Jordan's sneaker with the 11th AJ 11, the first Air Jordan to feature Cordura nylon, patent leather and carbon fiber. Thick!

The Air Jordan 12 was originally released in 1996-97 and was designed by Tinker again. The AJ 12 design is inspired by the Japanese flag Nisshoki as well as a women's boot from the 19th century. The sneaker is equipped with both Zoom Air and carbon fiber. Unique and strange - what do you think?

The Air Jordan 13, designed by Tinker, is inspired by a black panther, reminiscent of MJ's game. The outsole represents the paw of a panther, while the hologram on the ankle represents the eyes of the panther. These were the last Jordan sneakers released when Michael Jordan was a member of the Chicago Bulls. The legacy ends here!

That's it from the Michael Jordan Nike Blog. As you probably know, there are more models, but as mentioned in the article before, here are the models that include the years when MJ was still with the Bulls!

If you're up for an Air Jordan, check out our Sneaker Collection "Air Jordan for me!