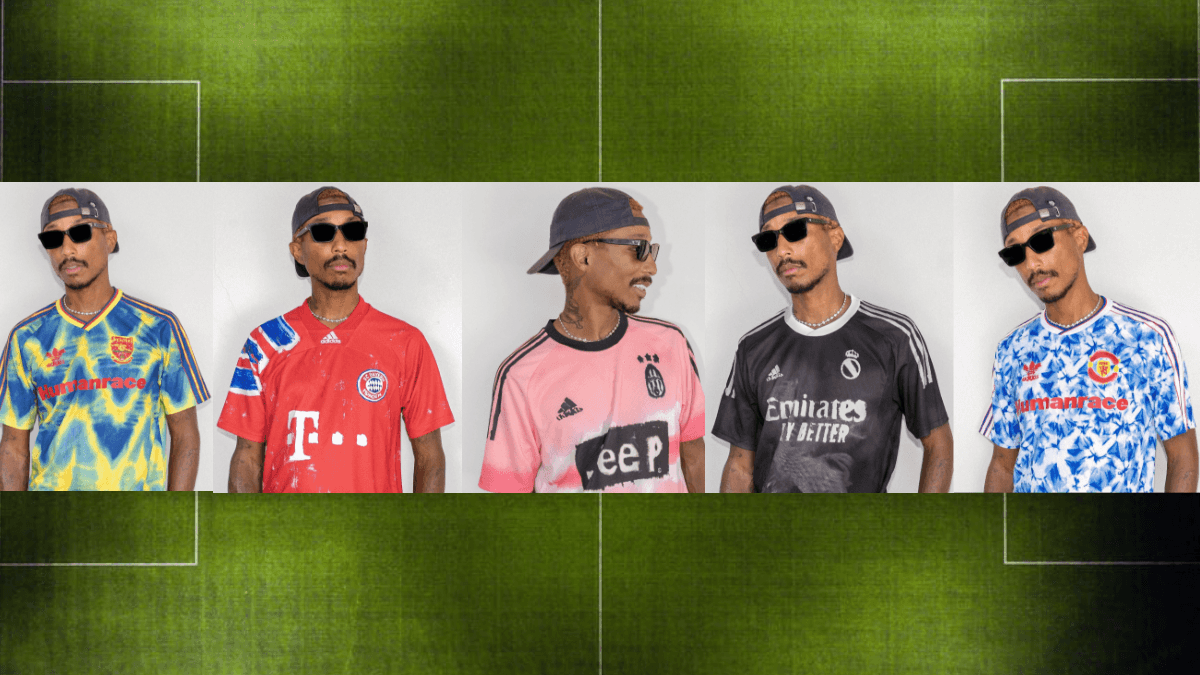 The season is in full swing, the European Cup group stages are halfway through and things are looking really good for the German clubs, but that is not the topic of this blog post. However European football is, and adidas has worked with some of the best teams, including Juventus Turin, Manchester United and Real Madrid, to design and launch some Human Race football kits with Pharrell Williams. A total of five Human Race football jerseys have been released, one for each team. Which teams that are and what the jerseys look like, all made from sustainable materials, is explained in detail here.

The list starts with the current best team in the world, the current German Champion, DFB Cup Winner and Champions League Winner, FC Bayern Munich. For this special jersey, Pharrell was inspired by the home jersey of the Munich team from the seasons 1991 to 1993, when Lothar Matthäus and co. wore a similar jersey.

The current Team, around Robert Lewandowski, plan to wear the jersey in the DFB Cup match against Holstein Kiel. However, this is not the best thing about the jersey. As all the income made with the jersey will go to the SOS Children's Villages.

If you like the jersey, you can go directly to the product page via the pictures.

From the current Champions League winner, we now come to the record winner of the competition, Real Madrid. There Pharrell Williams is inspired by the jersey, designed by Yohji Yamamoto for the 2014/2015 season. The kit, which was already a special design on the jersey, at that time, remains, the only change being the blurred details on the jersey.

Click on one of the pictures, to go directly to the product page.

From two teams that have won the Champions League in recent years to one that hasn't won the cup for a long time but is still one of the top European teams, Juventus Turin. But first a little flashback to the jersey.

The year is 2016 and Drake posts a picture on Instagram in a pink Juve jersey, within days the jersey becomes the most popular in the sports world. This is exactly the jersey Pharrell is now using as the focus for his Juventus Turin jersey. The colours remain exactly the same as on the old one, but here too the details become less clear. A pattern that can be seen on all five jerseys.

Whether Drake will wear this jersey again is still unclear, but if he does with Ronaldo on his back it could become the most hyped jersey in sports history, so if you want to treat yourself to this jersey before, just click on one of the pictures.

On the trail of Sir Alex Ferguson

Next up, Manchester United, possibly the most famous club in the world. Although the years since the legendary coach Sir Alex Ferguson stepped down have not been so successful, the name Manchester United is still a statement in European club football. Therefore it was clear that the club would not be missing in this series. Not surprisingly, Pharrell Williams has also chosen a jersey from the Fergie era. The blue and white away jersey from the 1990/91 season is the inspiration. Again, the details are as if painted with watercolours.

Manchester United playing in a light blue jersey has been unusual since the success of city rivals Manchester City, but perhaps the aim is to show that Manchester are only blue when United play in their blue jerseys.

As with all other jerseys, the pictures will take you directly to the product page.

Last but not least, there is a jersey from the Gunners. The successful club from the North of London, which like Manchester United has had problems in recent years, is still causing a stir with its name and also with this new jersey. Inspired by the so-called Banana Bruise jersey of the early 90s, in which one Ian Wright is goal scorer, Aubameyang can now go on goal hunting. Our favourite detail on the jersey? The old Arsenal logo on the chest, just gorgeous.

You can probably guess it, if you click on one of the pictures, you go directly to the product page.

So much for the Human Race football jerseys, the top European teams. Pharrell Williams designs not only jerseys but also sneakers with his brand Human Race, which you can find here.