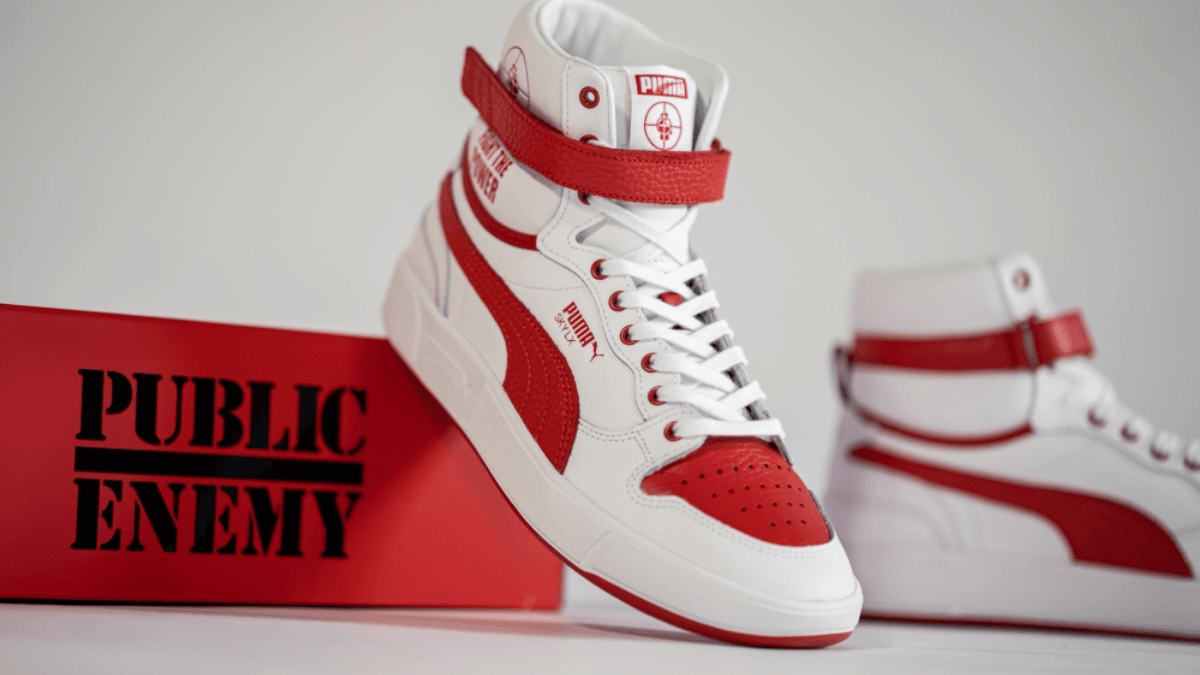 Public Enemy is a hip-hop formation that was one of the most influential groups on the US rap scene in the late 1980s. They belong to the legendary label 'Def Jam Recordings', which helped hip-hop to gain a foothold in the mainstream. In 1984 the US label was founded by Rick Rubin and Russell Simmons and even the famous combination 'Run DMC' ran under this label name! What maybe not everybody knows: US-Rapper Jay-Z has been leading Def Jam Recordings from 2004-2007.

In this collaboration the 1990 Public Enemy album 'Fear of a Black Planet' is celebrated. It was the their third album and was even ranked number 302 on the Rolling Stone music magazine's list of the 500 best albums of all time! Today it is even considered a milestone of the hip-hop genre. The album is characterized by socially critical content and is not praised so highly for nothing. It's best to listen to it yourself. The two songs dedicated to the Public Enemy x PUMA Sneakers are embedded below. But let's take a closer look at the models:

The PUMA Sky LX is an old classic from PUMA, which celebrated its original as a basketball shoe in 1985. Even then it was a popular choice and now the iconic sillhouette is back! This Public Enemy x PUMA Sky LX 'Fight the Power' comes in red and white leather upper - colors that Public Enemy also likes to use. Like it's OG, we have a velcro closure at ankle height. At it's height we also can find the slogan details, such as the song title lettering "Fight the Power" - a true statement to express with it's red lettering on a white background. We can see a collab branding on the outside of the shoe. Supposedly there is also one on the tongue of the shoe.

Unfortunately I don't know much more, but the picture is really promising. You can get the Public Enemy x PUMA Clyde 'Fear of a black Planet' for €123. If you want to have the sneaker, just click on the button below:

The PUMA 'Clyde' silhouette also has a long history. It was once designed by basketball star Walt 'Clyde' Frazier and is now a highlight for many retro fans. In this version we get a suede upper in a red and black colorway. These colors are the trademark of the group Public Enemy. As with the Sky LX version, the collab is said to have been immortalized on the shoe tongue. On the white midsole the song title 'Fear of a Black Planet' is immortalize in bold and large letters. Public Enemy has immortalized itself on the shoe tongue. Furthermore we find an OG PUMA gold branding on the upper. You can get the Public Enemy x PUMA Clyde 'Fear of a Black Planet' for €75! Just click on the button below:

Have you got the desire for more PUMA Sneakers? Then simply browse through our Sneaker Collection, we have a large selection of sneakers for you. And thanks to our Newsblog you won't miss any more sneaker news! Of course you can also find us on Facebook and Instagram. We are going hunting for you!