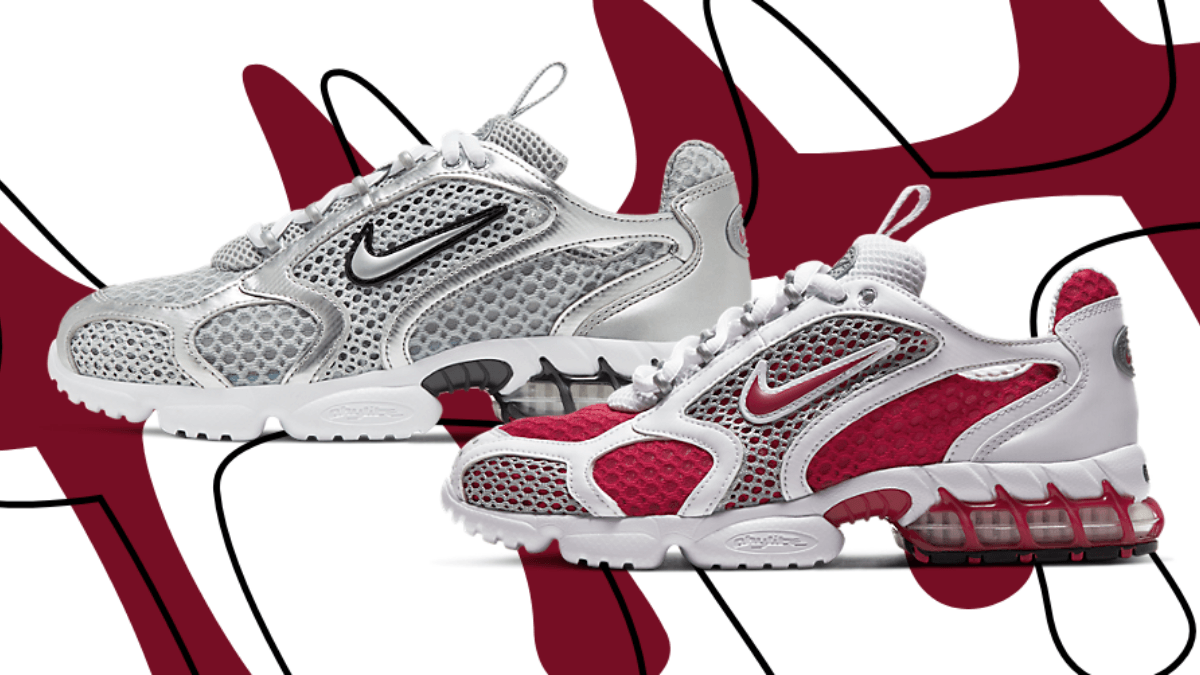 At last! The girls among you had to draw the short straw for this unbelievably good silhouette so far. But Nike now confirms the official first release of the Nike WMNS Air Zoom Spiridon Caged 2 models of this year! If you haven't seen the two already announced releases for the Lords of Creation yet, here: ➡️Nike Air Zoom Spiridon Caged - The two OG colorways.

You don't necessarily need more information and you are already overwhelmed by the magnificence of these two jewels from Nike? Then pay close attention now: The Nike WMNS Air Zoom Spiridon Caged 2 'Silver' as well as the Nike WMNS Air Zoom Spiridon Caged 2 'Cardinal Red' will both celebrate their long-awaited release next week on April 13, 2020 and as usual, the release will be in the SNEAKRS App at 09:00 am. With the usual suspects (the usual retailers) you'll surely find what you're looking for. Which one you finally decide for, I leave up to you. Just make sure you have €140 ready and check out a list of retailers by tapping on the button of the respective shoe ⬇️

With this silhouette, which was first released in 2003, Nike hits the beat of time in my opinion. A running shoe that obviously looks like one, but has lots of details and an extraordinary design. Fits every outfit through contrast. That's how I would describe it. Because these two colorways on the silhouette of the Nike WMNS Air Zoom Spiridon Caged 2 are real eye-catchers and make even the most inconspicuous outfit look great!

But now to the details of both sneakers:

My personal favorite of the two CW's (colorways). However, as always, this is pure matter of taste. Roughly speaking the WMNS Air Zoom Spiridon Caged 'Cardinal Red' gets the colors red, silver and white. The mesh underlay shines in a very nice red. The 'Cardinal Red', which I never saw before at Nike. At least I can't remember it. A white leather and a silver mesh decorate the shoe as an overlay and together with the white midsole they create a dynamic, eye-catching look. The red swoosh on the side harmonizes with the red underlay as well as the eye-catching "Caged Air-Unit", which also gives the Spiridon Caged its name.

The colorway of the WMNS Air Zoom Spiridon Caged 2 'Silver' is for those of you who think a flashy red upper is too much of a good thing. Or for those of you who just can't get a red shoe to go with the contents of your wardrobe. With this classic colorway I can hardly add anything to my material overview of the 'Cardinal Red'. Mesh upper, leather and mesh overlay and swoosh in silver. The cage gets a high-contrast black. At this point I have an important info for the sneakerhead couples among you: This colorway comes in the same design for men and women. So perfect for a partner look!

Below I have added some more pictures of the two gems here. Convince yourself of this silhouette and these two first colorways of the year. I promise you in any case, there will be some more to come. Stay tuned. ?